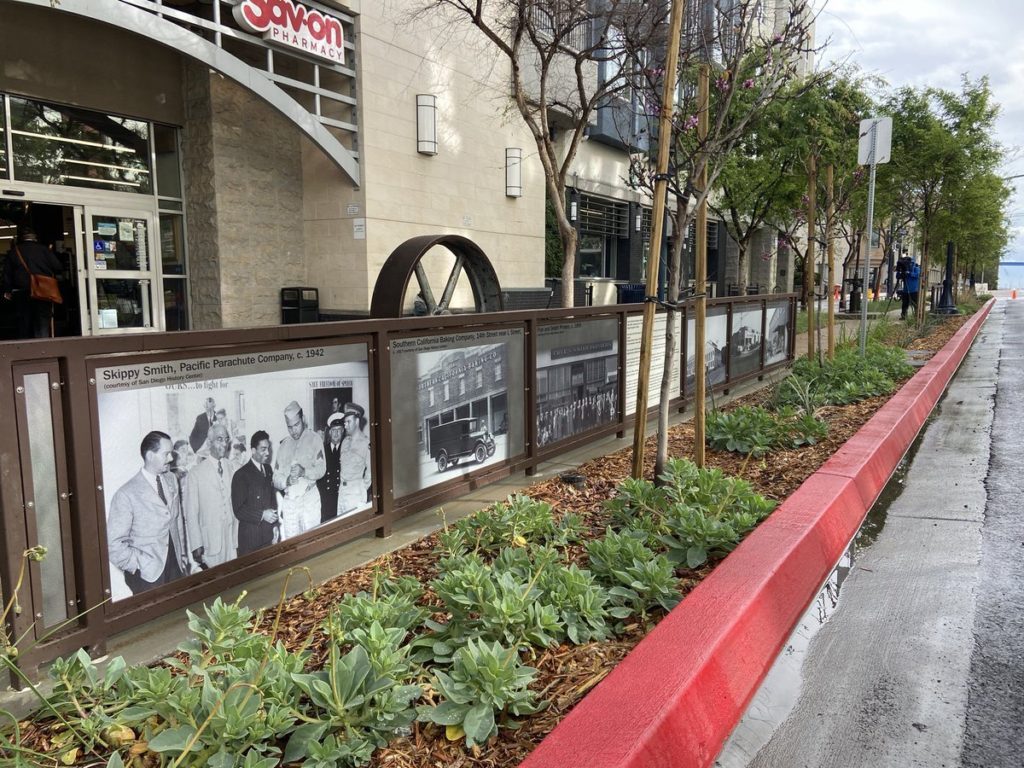 Last week, the city of San Diego opened the first segment of a planned 11-block neighborhood greenway in its Downtown area. The 14th Street Greenway Project will extend 11 blocks from C Street to Commercial Street. Five other greenways will be located along Eighth Avenue, Cedar Street, E Street, Island Avenue and Union Street. The “first block” that opened last week is located on 14th Street between G Street and Market Street.

“These welcoming greenways are inviting and safe and create a much-needed walkable space for the Downtown community, which is forecasted to double in size in the next two decades,” Mayor Todd Gloria of San Diego said in a statement. “Spaces like this encourage residents to get out of their cars, which helps us achieve our climate-action goals. I look forward to creating more projects like this across our city.”

The first phase of the Greenway installed last week, included the following improvements:

Four industrial artifacts were donated by the family of late East Village pioneer Bob Sinclair and were displayed along the greenway along with centrally placed panels showcasing historical images of the iconic San Diego neighborhood.

The city will construct a second and third block of the project immediately to the south between Market Street and Island Avenue and within the East Village Green park to the north. Both blocks will start construction later this year. Private developers will construct the two other blocks along 14th Street in the next two years.

“There is no more perfect place to launch the greenway program than in downtown,” said City Council President Pro Tem Stephen Whitburn in Patch. “With San Diego’s nearly year-round perfect weather and as we move closer toward reaching our climate action goals, I am excited to see more and more projects like this that improve walkability come to life…”

In addition to helping transform Downtown San Diego into a world-class urban center, it aligns the goals of the city’s Climate Action Plan and the Downtown San Diego Mobility Plan. The Climate Action Plan calls for eliminating half of all greenhouse gas emissions in the city, and aims for all electricity to be from renewable sources by 2035. The Mobility Plan envisions repurposing downtown’s roadways with landscaping and greenery and integrating a safe, multi-modal transportation network within the surrounding communities.