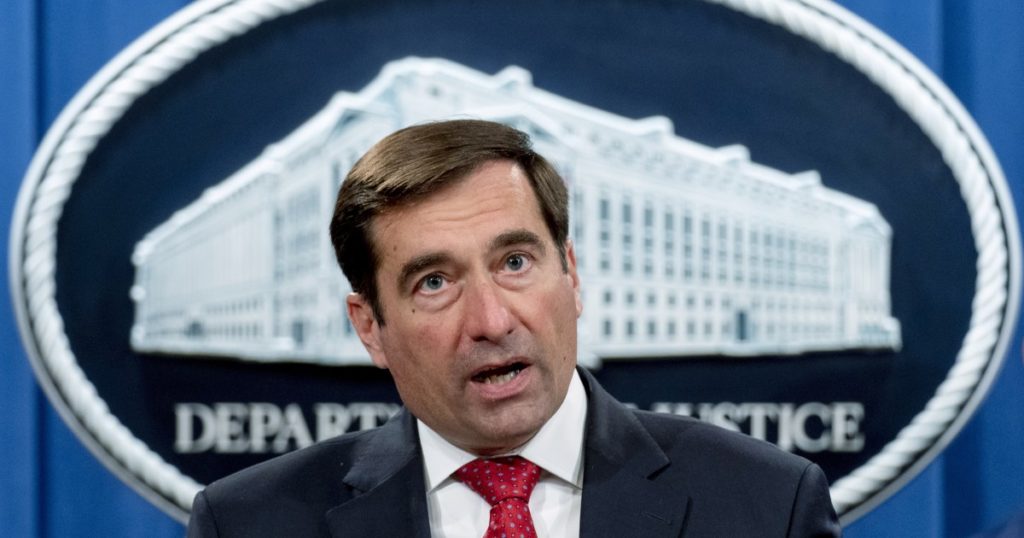 John Demers, the top national security official at the Department of Justice, says he was unaware federal prosecutors had secretly obtained records concerning Democratic lawmakers, a move that generated intense controversy when it became public this month.

Demers, the highest-ranking Senate-confirmed Trump appointee still at the Justice Department, is stepping down later this week. He spoke Monday to the Los Angeles Times in a wide-ranging interview about his three-year tenure, including his division’s efforts to crack down on China’s intelligence-gathering, stymie foreign influence in elections and U.S. politics and improve oversight of how the U.S. government obtains warrants from an intelligence court to conduct surveillance.

The 49-year-old announced his departure days after news broke earlier this month that the Justice Department in February 2018 subpoenaed records from Apple. That subpoena, obtained as part of an investigation into leaks of classified information, ultimately swept up records concerning California Reps. Adam B. Schiff (D-Burbank) and Eric Swalwell (D-Dublin), both members of the House Intelligence Committee, as well as their relatives and staff members.

Demers took over as assistant attorney general for national security about two weeks after the prosecutors sent the subpoena to Apple. He said he was not told about the subpoena at the time; a spokesman later said Demers did not learn about it until last month.

Demers declined to comment on the issue, citing an investigation by the Justice Department’s Office of the Inspector General.

The inspector general is sure to focus on how much high-ranking officials at the Justice Department knew about the subpoenas and how much leeway front-line prosecutors are given to gather information in sensitive cases.

Atty. Gen. Merrick Garland announced June 14 that he was already taking steps to address the issue, saying he had asked Justice Department officials “to evaluate and strengthen the department’s existing policies and procedures for obtaining records of the Legislative branch.”

The inspector general is also investigating the decision by the Justice Department to seize records of reporters from the Washington Post, New York Times and CNN. Garland said that at the direction of President Biden, prosecutors would no longer seek to obtain such information.

When news of the Apple subpoena became public June 10, Democrats expressed outrage, saying it appeared the Trump administration was targeting the former president’s political foes. Schiff and Swalwell were among Trump’s sharpest critics. The Justice Department told House Intelligence Committee officials it had closed the investigation, and no charges would be filed.

Top Democratic senators pledged to hold hearings and seek testimony from former Attys. Gen. Jeff Sessions and William Barr to figure out what they knew about targeting lawmakers’ data.

People close to Sessions said he was not aware prosecutors had sought the information. Barr, in an interview, said he also did not know about the effort. Both Sessions and Barr aggressively pushed prosecutors to pursue leak investigations, and Demers was in charge of many of them.

Demers, who was considered among the most apolitical Trump appointees, served in the national security division in the Bush administration before becoming a lawyer for Boeing. His nomination was supported by former Obama administration officials and was confirmed without objection by the Senate.

Demers’ most lasting legacy will likely be how he focused the department’s resources on battling economic espionage and the theft of trade secrets by China. Since 2018, the Justice Department has brought about a dozen cases alleging that people engaged in economic espionage or sought to steal sensitive information from companies or institutions that benefited Beijing.

Under Demers, the Justice Department has also sought to counter China’s efforts to target expatriates accused of antigovernment activities. In October, the department indicted eight people on charges they conspired to work on behalf of the Chinese government “to harass, stalk and coerce” U.S. residents to return to China, the department announced at the time.

“China is increasingly aggressive and muscular in its desire to project its power into our countries, into democracies,” Demers said.

Another area in which Demers said he sought to reshape department policy was in more aggressively combating covert foreign influence of elections, U.S. policies or public opinion. The Justice Department since 2016 has tripled the number of registrations of lobbyists, public relations professionals and others working on behalf of foreign governments, political parties, individuals and companies, Demers said.

“There are a lot of people doing work that they weren’t registering for, and that’s ultimately what this is about: It’s about bringing that influence out into the open,” Demers said.

In January, Demers was asked by John Carlin, the top official in Deputy Atty. Gen. Lisa Monaco’s office, to stay in the job to help ease the transition. Demers said he agreed to continue in the post, setting a deadline to leave by late this month, when his children, ages 14 and 9, finish school. He said he plans to take the summer off with them before deciding on his next professional move.

Demers insisted that his long-planned resignation had nothing to do with the controversy surrounding the subpoena of Apple. Last month, Biden nominated as Demers’ successor Matthew Olsen, who was a counterterrorism official in the Obama administration.

The outgoing assistant attorney general said he did not think the Biden administration’s approach to national security matters would change much, noting that such work is typically guided by emerging threats. He said he anticipated the national security division to play a larger role in coming months and years in prosecuting those accused of domestic terrorism, and that officials would have to carefully balance such enforcement efforts with 1st Amendment rights.

Demers added that the Justice Department had learned lessons from how it utilized the nation’s secret intelligence court to obtain authorization to conduct surveillance in 2016 on Carter Page, a former Trump campaign adviser. The department’s inspector general issued a scathing report in late 2019 alleging that the FBI and Justice Department committed serious errors in how they obtained a warrant to surveil Page.

Demers said national security prosecutors are more closely vetting warrant applications before they reach the Foreign Intelligence Surveillance Court. Soon, he said, FBI agents in the field — as opposed to specialized agents at headquarters — will be permitted to sign affidavits seeking permission to conduct such court-sanctioned spying. Such a move is expected to ensure that fewer errors are made in affidavits because the agents most familiar with a case will be tasked with authoring them.