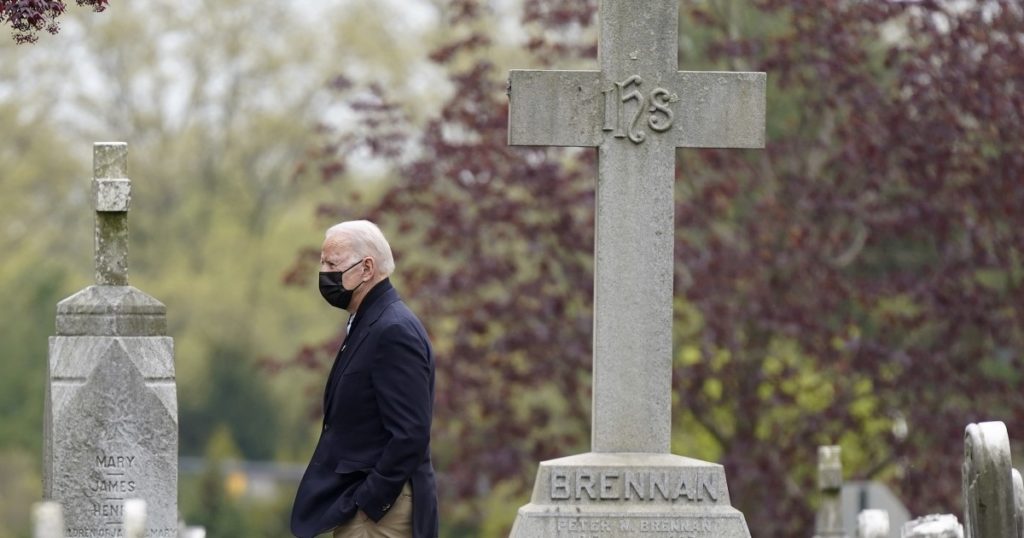 Since President Biden took office, he’s talked about two goals more than any others — ending the COVID-19 pandemic to ignite a jobs boom, and uniting a politically divided country.

As he approaches his 100th day as president on Thursday, it’s clearer than ever that those two goals are interwoven, and success with the first may not be possible without the second. As much progress as Biden has overseen in the nation’s public health campaign, the mission is far from accomplished.

So politicized was the pandemic response Biden inherited that polls consistently show Republicans are more resistant to getting vaccinated, and public health leaders say the daily number of shots delivered could begin to slow down, even as supplies have become more readily available. What began as a logistical success — the United States has vaccinated a greater percentage of its population than almost any other nation — risks becoming bogged down just as Biden is pushing toward the finish line.

Unless the country reaches the elusive goal of herd immunity from COVID-19, it could still suffer outbreaks or even produce new variants more difficult to protect against.

“Vaccines can save your own life, but they can also save your grandmother’s life, your co-worker’s life, the grocery store clerk, or the delivery person helping you and your neighbors get through the crisis,” Biden said last week.

He described the vaccination campaign as “a powerful demonstration of unity and resolve” and “a reminder of what we can accomplish when we pull together as one people to a common goal.”

Yet despite his rhetoric, partisan splits remain. Republican-led states, particularly in the South, generally have lower vaccination rates. California has administered 72,885 shots per 100,000 people, versus 51,093 in Mississippi and 50,404 in Alabama, according to the Centers for Disease Control and Prevention.

Biden is also confronting new challenges in persuading Americans to remain vigilant when more than 40% of adults have received at least one shot, but the country still averages nearly 60,000 new cases of infection every day.

He’s expected to announce new guidelines on mask-wearing Tuesday, potentially loosening recommendations for Americans who have been fully vaccinated amid pressure to acknowledge that people are far less likely to become infected outdoors though many states still require masks in public.

To date, the Biden administration has approached the COVID-19 threat cautiously, hesitating before saying vaccinated people can travel safely and maintaining recommendations for social distancing in schools that some critics consider too strict.

It’s one of many sharp shifts from President Trump, who rarely showed concern for the death toll or for following his own health officials’ advice, actively encouraging people to risk infection by holding campaign rallies during last year’s presidential race.

Biden carries a card in his pocket with the latest death count, pulling it out to remind the public of the pandemic’s terrible cost. The country is expected to surpass 600,000 deaths in the coming weeks.

His administration has also pushed public health officials back into the spotlight. Top medical advisors including CDC Director Rochelle Walensky hold regular briefings and take questions from reporters, usually three times a week. Anthony Fauci, the federal government’s top expert on infectious diseases, is a common presence. Yet Fauci, polls show, has become a polarizing figure among conservative Americans who balk at getting shots.

Biden never participates in the briefings as Trump once did. When he does speak about the pandemic, he’s replaced Trump’s inconsistent guidance with persistent reminders to wear masks and follow other guidelines.

“He’s absolutely changed the course of the pandemic response in a fundamental way,” said Howard Koh, a Harvard professor who served as assistant secretary at the Department of Health and Human Services under President Obama.

Yet even as Biden has tried to centralize the nation’s response with his administration in charge, he’s faced a challenge inherent to the U.S. system of federalism. Individual states, not the federal government, are responsible for implementing anti-coronavirus restrictions on businesses and public gatherings. And Republicans who govern in places such as Texas have blown off Biden’s encouragement to maintain mask mandates and other restrictions.

At the same time, Democratic-led states such as Michigan and New Jersey have seen rising infections as public health leaders struggle to convince restless residents to stay locked down until more are vaccinated, and some elected officials give ground under the pressure.

“Even the most committed are possibly looking for justifications to relax,” said Jennifer Nuzzo, a senior scholar at the Johns Hopkins Center for Health Security. “It’s hard to imagine even the most persuasive and gifted orators coming in and marshaling giant behavior change at this point.”

Caseloads have remained stubbornly high even with vaccinations moving ahead of schedule. Although they’re dropping, they’re not much lower than they were during last summer’s surge.

Nuzzo said that’s because the inoculation campaign began with the oldest Americans — those most at risk to become seriously ill and die from COVID-19 — and younger people who are working, traveling and socializing are most likely to transmit the virus. She’s hopeful that caseloads will plummet now that they are becoming inoculated.

If not for the vaccinations, the situation would be far more bleak.

“We would be in that fourth surge that we’re seeing in Europe right now,” Nuzzo said. “I have no doubt that we’d be heading back toward a lockdown.”

Biden inherited three vaccines that were successfully developed under Trump’s watch, then turned the country into an inoculation powerhouse. Anyone older than 16 was eligible to get vaccinated as of mid-April, two weeks ahead of Biden’s original goal, and there are enough doses to keep pace with demand.

Only now it’s demand that’s perhaps in short supply. Frank Luntz, a Republican pollster who has conducted focus groups to better understand vaccine hesitancy, said Biden “has a long way to go” to convince more Trump voters to get a shot.

A kumbaya moment with Trump isn’t on the Biden administration’s to-do list. Instead officials have been networking with religious leaders and local doctors, hoping that community voices will be the most persuasive.

Lee Riley, chair of the infectious disease and vaccinology division at the UC Berkeley School of Public Health, said the administration needs to do more of that, and avoid a “top-down approach” to encouraging vaccines.

“I don’t think they’re doing enough,” he said. “Instead of just talking about it, they really need to start going into the communities.”

Jeff Zients, who leads Biden’s COVID-19 task force, acknowledged the issue with vaccine hesitancy. “We’ve gotten vaccinations to the most at-risk and those most eager to get vaccinated as quickly as possible,” he said during a briefing Friday. “And we will continue those efforts, but we know reaching other populations will take time and focus.”

Officials have not set a firm number for what percentage of Americans need to have some kind of resistance to COVID-19 — either from vaccinations or from antibodies after recovering from the disease — in order to reach herd immunity. Estimates range as high as 85%. Nearly 30% of Americans are considered fully vaccinated by the CDC.

“We are very fortunate in the United States to have access to the life-saving vaccines and we should take advantage of having that access,” said Robert Kim-Farley, a professor at the UCLA Fielding School of Public Health.

The vaccination campaign suffered a setback this month when federal health officials called for pausing the administering of Johnson & Johnson’s vaccine so they could investigate reports of rare and dangerous blood clots. Although they lifted the pause Friday, it appears public concern will linger.

A poll released Monday by the Washington Post and ABC News said less than 1 out of 4 unvaccinated Americans were willing to get the Johnson & Johnson vaccine. Only about half of unvaccinated Americans said the vaccines produced by Pfizer and Moderna were safe, but that was nearly twice as many as said the same thing about Johnson & Johnson’s version.