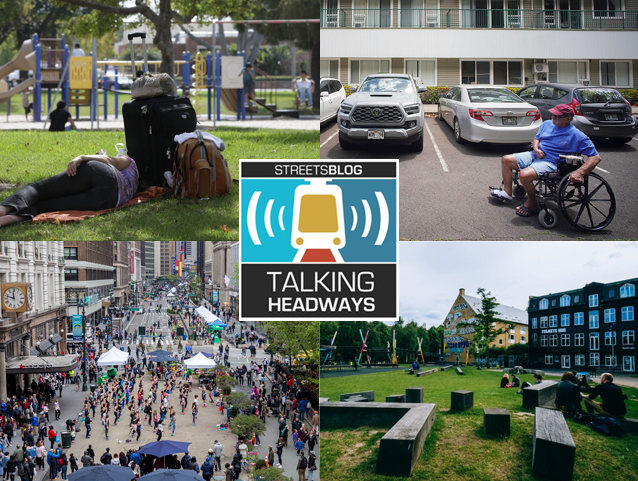 This week, we’re joined by Sharon Roerty, senior program officer at the Robert Wood Johnson Foundation, and Maki Kawaguchi, a director at Gehl, to talk about the Inclusive Healthy Places Framework. Roerty and Kawaguchi talk about the importance of creating spaces that bring dignity to all users, the importance of evaluating existing spaces, and creating a data driven and people first approach to creating inclusive healthy places.

If you prefer to read rather than listen, check out the edited transcript below the audio player. If you want an unedited full transcript (yes, with typos), click here.

Jeff Wood: There are small conflicts that occur when you’re trying to plan spaces, or trying to be inclusive about spaces. How do you deal with conflicts that might arise between different stakeholders who might have different goals for place?

Sharon Roerty: In our process, we had many people engaged with the process while we were developing the Inclusive Healthy Places Framework. And when I say “many different people,” they were from all different kinds of backgrounds and professional people — planners, architects, designers, finance people, community activists, regular citizens that we pulled into the process. The thing that galvanized everyone that brought everyone together was “dignity.” That we can all agree on; whether or not a space provides dignity for you and for other people. And that was when we came together and really made some progress. And when we can, we can look at a space or at a series of public spaces and ask, “Does that space provide dignity for me, for my neighbor, for my sister, my brother” — however you define “sister,” “brother,” “child,” “mother,” “grandmother.” And when you start thinking about dignity, you have a whole other lens to think about the public spaces. And that was really the, the value of the virtue that we all came together on.

Maki Kawaguchi: I love that. The word dignity, is so key. You know, we don’t use those words in design and planning, right. But I mean, we talk a lot about social coexistence in our work. And part of that is communal dignity, right? That we can live together. And I just wanted to bring up an example of another body of work that we did in San Jose, where we essentially created a study to understand the coexistence in public space. And it essentially was an engagement tool for creating shared spaces with homeless people, unhoused people, right? And oftentimes there is this perception that, you know, a certain group of people equate to some bad behavior, but this tool really helped us understand that that’s not necessarily true

And so this tool really helped people awaken and see that antisocial behavior doesn’t only happen through the homeless people that they think are the bad people, but oftentimes they are just people who needed a place to hang out, right? And they’re not actually engaging in bad behavior, but we have a perception as a society, right? That homeless people equates to bad behavior. You know, we need to rethink of how we look up both people and behavior, and it’s just an awareness. And so again, I think in designing places, we need to think about that social coexistence and how can we become better at that? And with that, you know, this idea of dignity for everyone comes into play.

Sharon Roerty: One of the places we visited while we were developing the Inclusive Healthy Places Framework was a park called Folkets Park in Copenhagen. It had been through a couple of different sort of redesigns, but it was in need of a do-over. And there had been a lot of mistrust in the community because of things that the community members, the people that lived around the park wanted, and didn’t happen the last time, less several times. So this time, the City of Copenhagen engaged an artist to work with community residents to kind of re-imagine the space and what it could be.

So Folkets Park was located outside the city center in a pretty dense neighborhood. One could say a “transitional” kind of neighborhood. There were the hipster types, young families, some professionals, you know, social entrepreneurs. There were new immigrants to the community. There were homeless people that use the park. There was even, you know, sort of a local gang that hung out in the park. The artists brought everyone together and brought them all into the process and, in doing so, it wasn’t about coming up with solutions so much as what they wanted and what their vision for the park was and how it was it wasn’t working for them. And one thing the homeless people said was that the lights in the park being too bright at night, made them feel unsafe and made them feel vulnerable.

So in the process, one of the things they did was they worked it so that there were lights in the park at night, but gave homeless people, actually an area where the lights were dimmed so that they could sleep at night and not feel like they stuck out or not, you know, prey for other people. Now, people can think, “Oh, well, we don’t want to invite homeless people in the park,” but truth is they were there because, unfortunately, homeless people are in a lot of parks in public spaces. It gave them a safe place and they are part of the community. So by making the homeless people safer, it made everyone safer and it gave everyone dignity within this space.

It made them all feel like they were valued, community residents and community clients of the park and the public space. They all became stewards of the place. It became a different kind of place going forward.