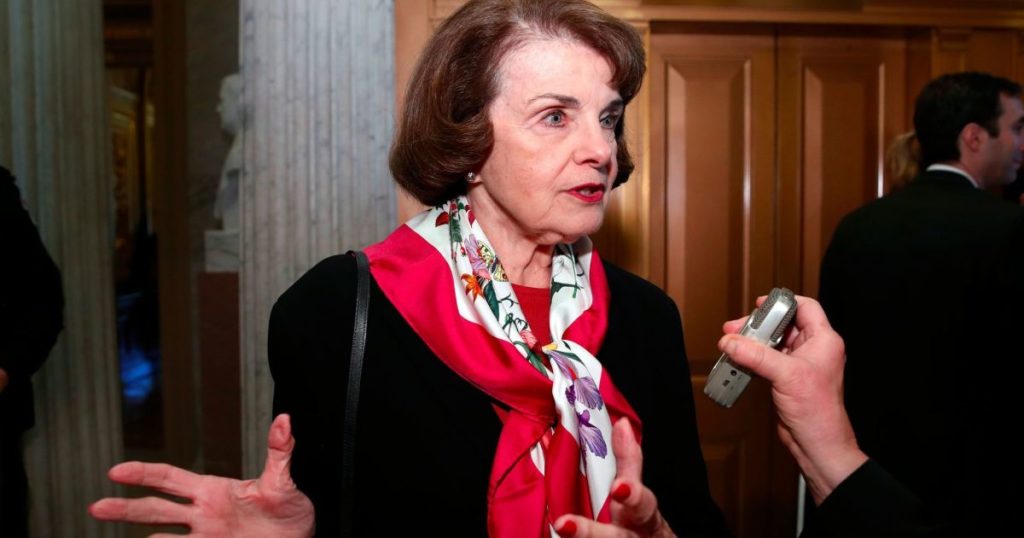 Sen. Dianne Feinstein will not pursue leadership of the high-profile Senate Judiciary Committee or any other committee next year, taking a dramatic step back following pressure from progressives who questioned her willingness to use tough, partisan politics to confirm Biden administration Supreme Court picks and other judicial nominations.

“California is a huge state confronting two existential threats — wildfire and drought — that are only getting worse with climate change. In the next Congress, I plan to increase my attention on those two crucial issues,” Feinstein said in a statement. “I also believe that defeating COVID-19, combating climate change and protecting access to healthcare are critical national priorities that require even more concentration.”

Feinstein, 87, is currently the ranking Democrat on the judiciary committee and was in line to become its first female chairman if Democrats take control of the Senate.

But the majority won’t be decided until two Senate seats in Georgia go to a runoff in January. Democrats will need to win both of those races to gain control of the Senate and with it, the power to confirm Biden’s judicial appointments.

Feinstein’s decision to give up such a highly coveted post is likely to renew speculation — which arose in 2018 when at age 85 she ran for a sixth term — that she will not serve the entirety of her Senate term.

Her decision not to pursue any committee posts — including the Senate intelligence committee, where she also has the seniority to lead — comes after Senate Minority Leader Charles E. Schumer (D-N.Y.) met with Feinstein in late October for what he described as a “very serious” conversation.

Some rank-and-file Democrats had quietly discussed with Schumer whether seniority is still the best way for Democrats to determine chairmanships and whether Feinstein was the right person to lead Democrats on the judiciary committee.

Feinstein, once one of the Democratic Party’s most seasoned and effective legislators, authored the nation’s first federal assault weapons ban, which expired in 2004, and as head of the Senate Intelligence Committee in 2014, fought the Obama-era CIA and Republicans to release unclassified portions of a massive government probe into U.S. use of torture.

But recently her tenure on the Senate Judiciary Committee has come under fire, particularly her handling — as the ranking Democrat — of President Trump’s Supreme Court nominees Brett M. Kavanaugh and Amy Coney Barrett.

Feinstein caused a firestorm among progressives in October when she shared a hug with Senate Judiciary Committee Chairman Lindsey Graham (R-S.C.) at the close of Barrett’s hearing.

“This has been one of the best set of hearings that I’ve participated in,” Feinstein said to Graham. “It leaves one with a lot of hopes, a lot of questions and even some ideas perhaps of good bipartisan legislation we can put together.”

Her comment not only undercut Democrats’ message that Barrett’s confirmation was illegitimate because it came so close to the election, it also helped boost Graham, who was engaged in a neck-and-neck battle for reelection with Democrat Jaime Harrison in South Carolina.

During the ugly fight over Kavanaugh, Feinstein was criticized for agreeing to Christine Blasey Ford’s request for anonymity after the Palo Alto professor privately alleged that Kavanaugh assaulted her when they were teenagers, a charge he denied. Ford eventually came forward to testify voluntarily.

Progressive groups such as Demand Justice and NARAL Pro-Choice America openly called for Feinstein to step down from her leadership of Democrats on the judiciary committee following the Barrett hearing.

Since she was first elected to Congress in 1992, Feinstein’s politics have generally trended closer to the middle than those of younger leaders in her party. That chasm has grown more defined as the party has moved further left.

For instance, she has been a proponent of keeping the legislative filibuster, which sets a de facto requirement of 60 votes in the Senate to approve legislation. Many other Democrats say it should be abandoned if they take control of the Senate in order to advance laws on climate change, voting rights and other measures expected to face solid GOP opposition. However, any discussion of eliminating the filibuster next year is moot as Democrats may not even have control of the chamber.

In recent months, Feinstein’s staff has sometimes had to clarify statements the senator has made in interviews in the Capitol. For instance, she told a Los Angeles Times reporter in September that she was unfamiliar with GOP moves to confirm appellate judges who don’t have the approval of their home-state senators, even though she had previously objected to that practice concerning judges in California.

Republicans came to her defense, saying the attacks on Feinstein were evidence that that Democratic Party has lurched too far to the left.

“They’re out there attacking this senior, female leader and tearing her limb from limb in public, which is really quite extraordinary,” said Sen. Josh Hawley (R-Mo.).