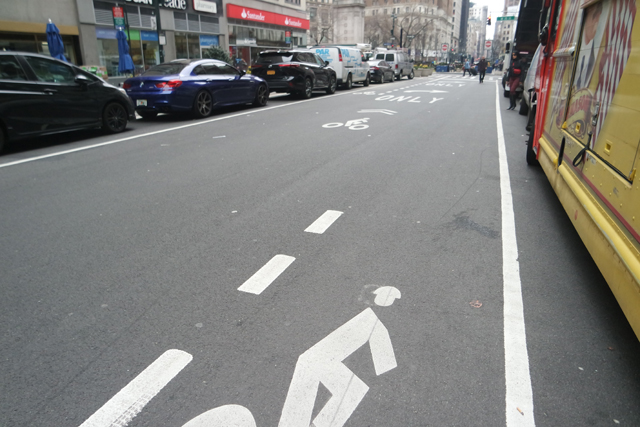 A nearly 900-page federal rulebook of arcane street design regulations that virtually no one has heard of just received an unprecedented amount of public interest — which street safety advocates chalk up to the great public concern about America’s perilous roadways.

The rulebook — the incredibly influential, but vastly unknown Manual on Uniform Traffic Control Devices for Streets and Highways — is getting revised for the first time since 2009, and the public comment period the just ended yielded more than 25,000 contributions from advocates, activists, pols, engineers and everyday people.

That’s a more than tenfold increase over the quantity of public input since the last time, according to the National Association of City Transportation Officials, which says the revision of the Federal Highway Administration’s road bible has the potential to positively alter guidelines that influence the design of every public roadway nationwide (or, in the famous case of the MUTCD-denied crosswalk, the lack of design).

“To make our streets safe, sustainable, and equitable, FHWA must commit to reforming this motor-centric regulatory document that affects every street in the country, and upgrade it to better reflect how we actually use, and want to use, our streets,” said Corinne Kisner, NACTO’s executive director.

The FHWA purports to be on the same page, saying its 132 substantive revisions would make streets safer and more accessible for pedestrians and cyclists. The agency cites proposed revisions that touch on crosswalk marking patterns, pedestrian push buttons, painted bike boxes at intersections and dedicated cyclist traffic signals.

Still, NACTO and a slew of other advocates say those changes wouldn’t go far enough. NACTO itself submitted more than 400 comments on the revision that call for, among other things:

A FHWA spokesperson did not immediately respond to a request for comment.

And it’s not just advocates and transportation wonks calling for the FHWA to go further with its revisions.

“As our city works on ambitious plans to make our streets safer and more accessible … we are too often finding that the MUTCD conflicts with new mobility best practices,” New Orleans Mayor LaToya Cantrell said in a statement. “The federal manual must be reformed so that it more closely aligns with the equity, safety, and sustainability goals of the Biden administration.”

The public comments that were submitted — a bit of light reading accessible here — included minute technical recommendations as well as big-picture ideas, with the occasional angry screed mixed in for good measure. But for many commenters, the gist was the same: create street design standards with all road users in mind, not just drivers.

“It is insane that road regulations and initiatives that benefit anyone [else] besides drivers are so goddamn difficult to maintain or improve,” one particularly ticked-off commenter wrote. “Cities should be designed around people and not vehicles.”