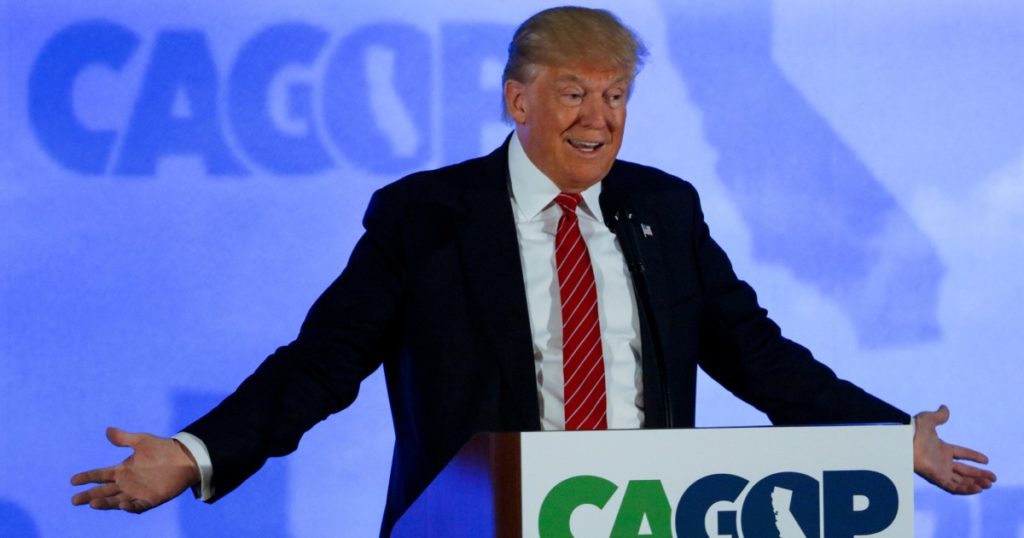 Gov. Gavin Newsom and his Democratic allies are dragging Donald Trump center stage in their fight against the Republican-led campaign to recall the governor, banking on the overwhelming distaste Californians hold for the former president to sink the effort.

But recall supporters want the spotlight to stay trained on Newsom’s actions in office, including his response to the COVID-19 pandemic, and are trying to send a message to the mercurial former president: Please stay out of our campaign.

“I think the less he’s involved in the recall, the better it will be for the recall,” said Dave Gilliard, a veteran Republican consultant who is working on the campaign and helped place the successful 2003 recall of Democratic Gov. Gray Davis on the ballot. “The recall has to be about Gavin Newsom for it to be a success.”

Trump remains extraordinarily unpopular in California — he captured just 34% of the state’s votes in the November election. And that was two months before radicalized Trump supporters rioted at the U.S. Capitol to stop Congress from certifying the outcome of the presidential election, leading to Trump’s second impeachment in the House of Representatives.

Loyalists to the governor are trying to yoke the Republicans behind the recall effort to Trump’s term in the White House, which saw policies targeting immigrants in the country illegally, led to two impeachments, polarized the nation and ended with a half-million Americans dying of COVID-19.

In January, Rusty Hicks, chairman of the California Democratic Party, described the campaign to recall Newsom as a “coup,” akin to the violent pro-Trump insurrection at the U.S. Capitol. LGBTQ rights advocates recently criticized the recall campaign as a backdoor power grab “led and funded by anti-LGBTQ+ and pro-Trump extremists.” Rep. Karen Bass (D-Los Angeles) on Monday called it a “Republican plot right out of Trump’s playbook.”

Newsom on Monday for the first time directly attacked the effort to oust him from office, labeling the campaign a “Republican recall” led by Trump supporters.

“Let’s call it what it is: it’s a partisan, Republican recall — backed by the RNC, anti-mask and anti-vax extremists, and pro-Trump forces who want to overturn the last election and have opposed much of what we have done to fight the pandemic,” Newsom said in an email sent by his campaign. “If they are successful, it would mean risking the progress we are making to end the pandemic. We can’t let that happen.”

Kimberly Nalder, a political scientist at Cal State Sacramento, expects the attacks on Trump to be effective in California.

“The strategy of tying the signature gathering and any subsequent candidate to Trump — especially to the extremist groups that were associated with the Jan. 6 attacks — is smart,” Nalder said. “He’s pretty toxic. That association is pretty radioactive.”

But Gilliard thinks that tactic will fall flat.

“I think it’s a high hill for them to climb,” he said. “He’s not on the ballot, so I think it’s going to be stretch.”

Gilliard and other recall supporters dismissed Newsom’s attempt to cast the recall as a Republican effort to short-circuit the governor’s victory in the 2018 election. He said the campaign has received thousands of signatures from independents and Democrats who believe Newsom’s response to the pandemic was ineffective and heavy-handed. While nearly two-thirds of the recall petition signatures his organization has collected are from Republicans, close to a quarter are from independents, he said.

“It is important for Republicans to not play Gavin Newsom’s game, and that is his attempt to turn the recall effort into something that is about Washington, D.C., and the past instead of a referendum on what type of leadership you want to have here in California,” said Ron Nehring, a former chairman of the California Republican Party who unsuccessfully challenged Newsom in the 2014 race for lieutenant governor.

A poll by UC Berkeley’s Institute of Government Studies released in early February offered some insight into how Californians feel about the political futures of Newsom and Trump. Among those surveyed, 36% said they would vote to recall Newsom, while 45% would vote to keep him in office. A poll released Monday by Nexstar Media Group television stations and Emerson College had similar results. Nearly two-thirds of California voters favored having the Senate convict Trump after his impeachment, which would have barred him from holding public office, while 32% opposed it. The Senate acquitted Trump last month.

GOP political consultant Rob Stutzman, who was Republican Arnold Schwarzenegger’s communications director during the 2003 recall and during his first years in office, expressed doubt that Trump would insert himself into the effort to oust Newsom. Not only did Trump lose to President Biden in November, but during his years in the White House, Republicans lost majorities in both the House and Senate to Democrats.

“I don’t know he’s anxious to put another loss on the board,” Stutzman said. “I think there’s actually a pretty good disincentive for Trump to get involved. He might endorse one of the Republicans but I think it would be a light touch because he’s not going to help anything succeed.”

Trump’s absence from the White House and his exile from Twitter, his bullhorn of choice, might be the best news recall supporters could hope for, he said.

“It shouldn’t be lost on people that Newsom’s and other Democratic governors’ popularity began to sink as soon as Trump left office,” Stutzman said. “The comparison frame of Democrats-versus-Trump really benefits Democrats in holding their base together, as well as a majority of independents. So Trump getting involved would be very good news for Newsom.”

The recall effort, which now appears to have gathered enough voter signatures to qualify for the ballot by year’s end, was initially fueled by animosity California’s conservative minority has voiced toward Newsom and his progressive agenda, virulence that is concentrated among the most devoted Trump supporters.

The recall petition itself focuses on longstanding GOP grievances: It blames Newsom for California’s high taxes and homelessness crisis, and criticizes him for protecting immigrants who entered the county illegally and halting death row executions. The petition was filed in late February last year, before the enormity of the coronavirus crisis was known.

Regardless of whether Trump decides to actively support the recall effort, Newsom’s supporters can be expected to do their best to ensure that the Republican president is tied to it in the minds of voters. This week, Newman accused the Republicans who hope to replace Newsom of “crawling all over each other to be as close to Trump as possible.”

Despite Newsom allies casting a Trump endorsement as something akin to a scarlet “T” in deep-blue California, a narrow path exists for a Trump-backed candidate to emerge victorious. If Newsom is recalled, the candidate on the ballot who receives the most votes wins — no matter how many votes he or she receives.

A ballot with crowded field of candidates could potentially splinter the electorate, especially if some high-profile Democrats decide to jump in. Though it’s a long shot, a Republican who reels in just 34% of the vote — what Trump received in November — could become California’s 41st governor.

That would require a Trump-endorsed candidate to attempt to earn the support of every Californian who voted for the former president, an extremely difficult task if there are several GOP choices on the ballot.

A candidate who can attract both right-leaning and left-leaning moderate voters could have a better chance of cobbling together enough support for a victory — and the vast majority of self-described moderates in California have a sour opinion of Trump, according to the Berkeley poll released in February.

Some of the Republican candidates hoping to replace Newsom have been open about their support for Trump and his policies.

Rancho Santa Fe businessman John Cox, who lost to Newsom in a landslide in the 2018 general election, was endorsed by Trump in that race, giving him a boost with GOP voters in the June primary — he finished second to Newsom and, under the state’s top-two primary rules, advanced to November. Cox applauded Trump’s economic policies during his frequent appearances on Fox News and defended Trump’s actions during the president’s first impeachment trial.

Richard Grenell, a former Trump Cabinet member who alleged voter fraud in the November election alongside other supporters without providing proof, has been a vociferous critic of Newsom and last month hinted at the annual Conservative Political Action Conference in Florida that he might run to replace him.

“In my three decades in American politics, I have never seen a better case for a recall than there is right now in California,” said Grenell, who served as Trump’s ambassador to Germany and later as the acting director of national intelligence. “And of course, if a public official is still failing to deliver on their promises and you can’t limit their term, or recall them in time, there’s always another option: You can run against them yourself.”

Afterward, Grenell stopped by Trump‘s Mar-a-Lago resort to have dinner with the former president, an occasion he memorialized on Instagram.

Former San Diego Mayor Kevin Faulconer kept Trump at arm’s length while in office, rejecting the former president’s hard-line immigration policy — including opposing construction of a massive wall at the U.S.-Mexico border — and he’s been more supportive of foreign trade and environmental protections.

Still, Faulconer said he voted for Trump in the November election, and he visited him in the White House in 2019, posing for pictures to celebrate the passage of the United States-Mexico-Canada Agreement.

Faulconer personifies the peril for Republicans when it comes to embracing Trump, who attracts fierce loyalty from his supporters but is anathema to California’s Democratic voter majority.

When asked by a Newsweek reporter whether he wanted Trump’s endorsement, Faulconer sidestepped the question, drawing a rebuke from the president’s son, Donald Trump Jr. — via Twitter, of course.

“I think it’s safe to say if he won’t say that he wants it that he likely doesn’t deserve it,” Trump Jr. wrote.