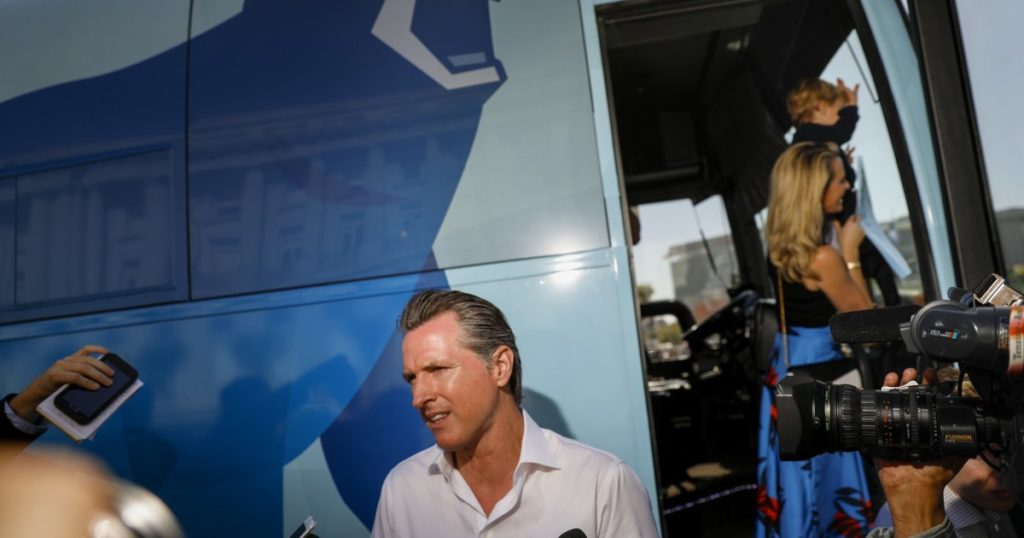 With backers of the recall against Gavin Newsom formally submitting the last of their petitions Wednesday, Democrats from California to Washington were readying what they hope will be a united front to keep the embattled governor in office.

Newsom’s campaign is trying to keep the party focused on fighting the recall and preventing prominent Democrats from getting into the race to replace him if it qualifies for the ballot as expected. He has racked up high-profile endorsements from Sens. Bernie Sanders (I-Vt.) and Elizabeth Warren (D-Mass.), among others, and hopes to tie the recall campaign to former President Trump and extremist groups.

The governor went on a national media tour this week, speaking out against the recall and generating both cheers from supporters and some controversy.

Nathan Click, Newsom’s campaign spokesman, said he expected heavy fundraising to fight the recall at the Democratic Party State Convention, scheduled for the end of April. Volunteers will spread out across the state to do text banking and other digital stumping in the upcoming weeks, he said.

“It’s been a steady drumbeat over the last few weeks of Democrats saying that [they support Newsom],” Click said.

But it’s still unclear whether any Democrats will enter the race to replace Newsom as an insurance policy against the growing field of Republican candidates, something that happened during the 2003 recall that ended with voters ousting Democrat Gray Davis and replacing him with Arnold Schwarzenegger.

To secure the full strength of the Democrats’ support, Newsom may need to put in some work to court members of his own party.

While Democrats are united in keeping a “Trump Republican” out of the governor’s mansion, progressive caucus chair Amar Singh Shergill said some more left-leaning party members are waiting to see Newsom deliver on progressive policy promises such as a universal healthcare bill making its way through the state Legislature, a fracking ban and support for eliminating the filibuster in the U.S. Senate.

“If Gov. Newsom doesn’t get on board with these progressive issues and fight for them, then he’s going to put his own candidacy at risk. Right now, we’re not looking at any other candidates, but we know there’s a simple formula for him to win,” Shergill said. “He has got to start fighting for those issues and show us that he is making progress.”

Though the state won’t finish certifying the signatures for several weeks — elections officials must determine how many are valid by April 29 — Newsom acknowledged Tuesday that he expects the recall effort to qualify.

Recall supporters said last week that they already gathered about 2 million signatures, more than the roughly 1.5 million they need for an election to take place. Volunteers handed in last-minute petitions to the registrar Wednesday as the campaign’s leaders celebrated the years-long effort.

“Later this fall, the voters of California will be able to participate in this historic, once-in-a-lifetime opportunity to participate in a recall of their chief executive officer,” said Randy Economy, senior advisor for the recall effort. “It’s a very, very powerful moment.”

On Tuesday, former GOP Rep. Doug Ose added his name to the list of other Republicans in the race to replace Newsom should the recall qualify for the ballot, including former San Diego Mayor Kevin Faulconer and businessman John Cox, who unsuccessfully ran against Newsom for governor in 2018.

As the recall campaign neared Wednesday’s deadline, Newsom’s supporters united behind him in defense of his record as governor.

“I’m completely devastated with the fact that people have even gone out to try to recall Gov. Gavin Newsom,” said Taisha Brown, chairperson of the California Democratic Party’s Black Caucus. “He has done some amazing work in the short time he’s been in office. … We wholeheartedly support Gavin, and will be working to fight back against the recall.”

Brown applauded Newsom’s handling of the COVID-19 pandemic, though she said he didn’t always have the right tools from the federal government under Trump. She and Norma Alcala, vice chair of the Chicano Latino Caucus, praised Newsom’s efforts to provide rent, food security and vaccines to essential workers, many of whom are people of color. They also pointed to Newsom’s several appointments of Black and Latino people to statewide positions as another success.

Both caucuses have pledged to use their various campaign methods — including radio ads, counterprotests and caravans — to campaign for the governor.

“It’s basically just an attempt by the Republicans — they can’t win any elections, so they’re going to try and do a special election,” Alcala said of the recall effort.

The California Democratic Party has pledged $250,000 to the campaign against the recall and launched a website, stoptherepublicanrecall.com, that Newsom promoted in a tweet on Monday when making his most direct comments yet about his fight against the effort. Other Democrats echoed Newsom’s comments in condemning recall organizers as anti-vaxxers, QAnon conspiracy theorists and nationally funded Republicans.

“This was something that was done under the Republican Administration under the thumb of the Trump followers,” said Mark Gonzalez, chair of the Los Angeles County Democratic Party. “Republicans knew they were losing their power nationally, and they’re trying to trickle it down here to California, and now here under this administration.”

Recall advocates have maintained that one-third of petition signers are not Republicans, though polling shows the effort is far more popular among those in the GOP than Democrats or unaffiliated voters. Gonzalez said he believes Republicans “were duping” Democratic voters who signed the petitions into blaming Newsom for their situation during the pandemic.

The governor’s handling of the pandemic remains a banner issue for recall advocates. Democratic leaders across the state are hopeful that by the time a recall election rolls around, likely in the fall, coronavirus cases will be down and the economy will be in better shape. California has already delivered more than 13 million vaccine doses, and the federal relief package just passed by Congress will help people’s wallets and bolster state and local budgets.

Some in the California Democratic Party, including rural caucus chair Joy Sterling, said the recall is distracting state leadership from what should be its singular focus: tackling the pandemic.

Though Newsom’s supporters believe his record will stand up to attacks from the recall campaign, they are also keeping close watch on any errors that could alienate voters in a race where he needs all the support he can get.

In the eyes of some Democrats, Newsom stumbled Monday when he told MSNBC’s Joy Reid that, should California Sen. Dianne Feinstein retire, he would appoint a Black woman to replace her, noting that he already had a list of several Black women whom he would consider. Newsom came under pressure late last year to fill Vice President Kamala Harris’ seat with a Black woman, but instead appointed then-Secretary of State Alex Padilla, California’s first Latino senator.

Feinstein reiterated that she had no plans to retire and Newsom downplayed his statement the next day — but not before riling up some members of the state Democratic Party Women’s Caucus, who voiced their frustrations to chair Christine Pelosi that Newsom’s theorizing about the senator’s replacement before she left office was not a good way to start the anti-recall campaign.

“I would hope that they remember there are a lot of women who vote in the recall, and it’s not a very good look to pit women together to save the job of a man,” Pelosi said of those organizing Newsom’s campaign.

Pelosi agreed that stopping a Republican from getting into office isn’t enough to galvanize voters, adding that grassroots organizers want to hear from the governor directly about what his message will be.