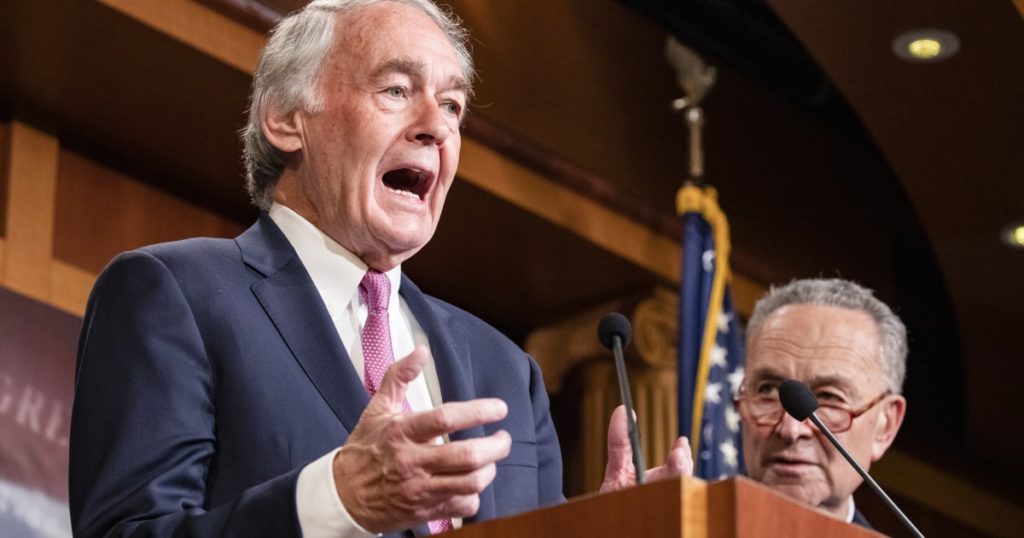 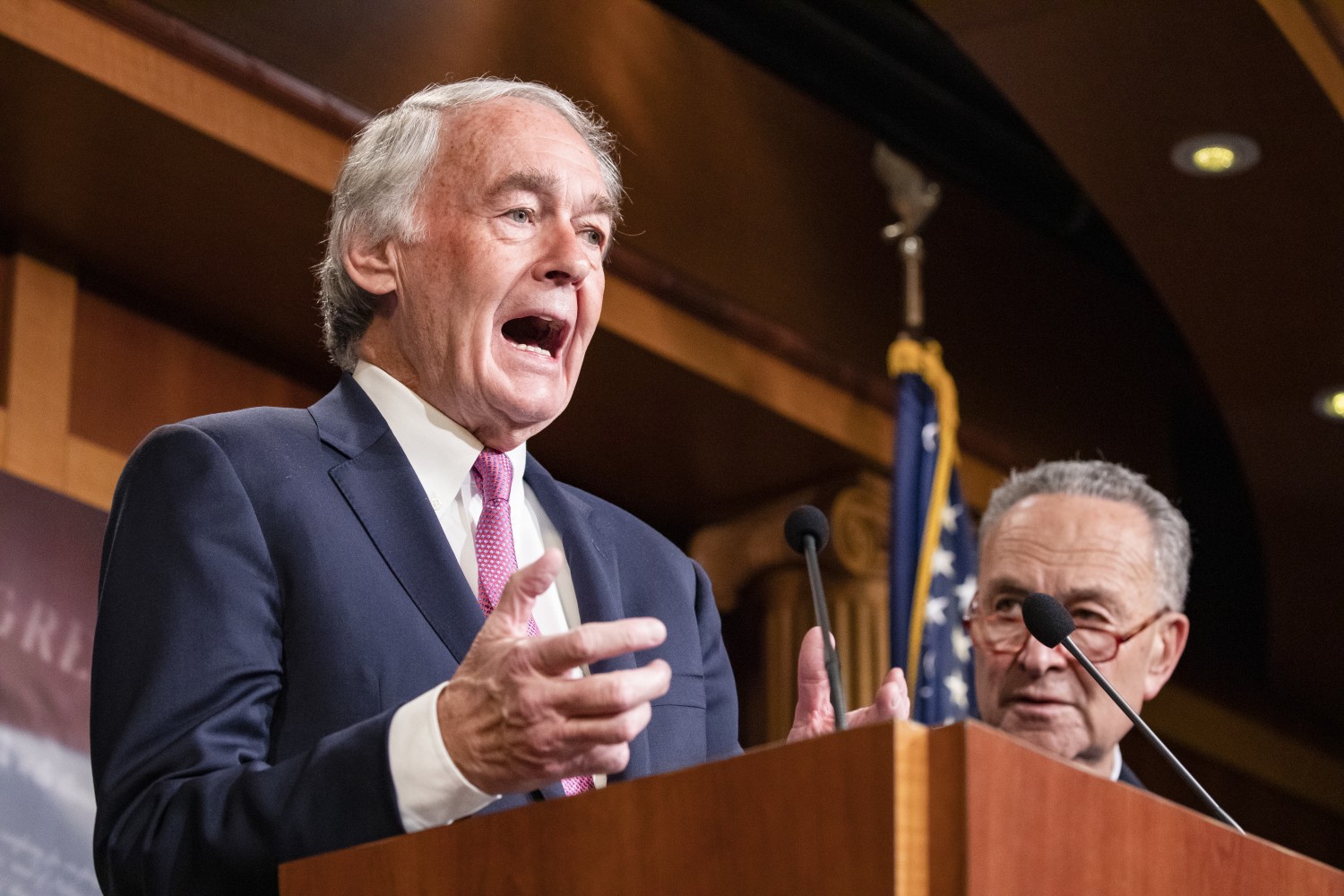 Prospects for a bipartisan infrastructure bill are growing increasingly dim as Senate Democrats make new calls for President Biden to ditch Republicans and pursue a Democrats-only measure that aggressively addresses their priorities, including the climate crisis.

A handful of key progressives say they’re done negotiating. Sen. Bernie Sanders (I-Vt.) said the latest bipartisan plan — which amounts to about $579 billion in new spending for roads and bridges — was a paltry substitute for what the nation needed.

Sens. Ed Markey (D-Mass.) and Jeff Merkley (D-Ore.) say they would oppose a bipartisan deal unless it comes with a guarantee of a follow-on bill to address the climate crisis.

Biden and Senate Republicans have been engaged in talks over a bipartisan plan to shore up the nation’s infrastructure for more than a month.

When talks with Sen. Shelley Moore Capito (R-W. Va.) fell apart, Biden moved on to another plan crafted by a small group of Republicans and Democrats. The latest proposal is backed publicly by only five Republicans, five short of the 10 GOP votes needed for passage, assuming all Democrats and independents are on board.

When an informal Memorial Day deadline passed without a deal, Democrats’ patience — already thin — evaporated. They want to notch legislative wins while they can.

“President Biden has laid out a big, bold vision, and it is urgent,” said Rep. Pramila Jayapal (D-Wash.). “The next step is clear: Let’s do what the people are demanding. Let’s go big, bold and fast.”

Democrats are cognizant that their thin margin in the Senate — 50-50 with Vice President Kamala Harris serving as the tie-breaker for Democrats — can evaporate if a single Democrat leaves office. And they are increasingly worried about a poor electoral outlook in the 2022 midterms.

As the bipartisan talks have gone on, climate has emerged as a top priority for Democrats and a key reason they don’t want to keep pursuing a bipartisan plan.

Markey and Merkley have repeatedly said “no climate, no deal,” meaning they would oppose a bill that doesn’t address the crisis. But they have not identified any specific climate policies that they must see in a bill to get their votes.

“What we’re asking for is to put together a set of policies that unleashes the wind and solar [industries], all-electric vehicle, plug-in hybrid, the battery storage technologies, the transmission systems, the changes in the agriculture and industrial sectors that will create millions of union jobs while at the same time ensuring that we have environmental justice,” Markey said.

Markey pointed to the climate policies in Biden’s original infrastructure proposal but stopped short of saying that the exclusion of any single one would be a red line.

Biden’s proposal included sweeping measures to address climate change. The clean energy standard is a central plank of that plan, mandating that electric utilities generate 80% of their electricity from zero-carbon sources by 2030 and 100% by 2035.

He also called for $15 billion for 500,000 electric vehicle charging stations, making it easier for more drivers to ditch gas-powered cars. Other provisions would push the country toward clean energy for powering homes, factories and more. Tax credits for wind, solar and energy storage facilities would be extended for 10 years. All of the country’s electricity would be generated from carbon-free sources by 2035.

“This is a huge moment when we have the opportunity to make the types of changes necessary to finally address climate change in a meaningful way,” said Rep. Mike Levin (D-San Juan Capistrano).

Several other California Democrats have echoed the call to address climate policy in the infrastructure plan, regardless of whether Biden continues to negotiate with Republicans or pursues a Democrats-only policy. They include Sen. Alex Padilla and Reps. Nanette Barragán of San Pedro, Ro Khanna of Fremont and Jimmy Gomez of Los Angeles.

The impatience of progressive Democrats adds to the struggle by Biden and Senate Majority Leader Charles E. Schumer (D-N.Y.) to get an infrastructure plan through the Senate.

They could eschew the progressives and try to write a bill that gets the support of moderate Democrats and Republicans. But that plan would likely falter in the more progressive House.

Although Schumer said the two tracks of bipartisan negotiation and a Democrats-only bill would continue, work on the Democrats-only package is speeding up. Schumer is set to meet with Senate Budget Committee members Wednesday to discuss having a budget, the first step of the process, by the beginning of July.

Schumer plans to instruct them to include funding for climate provisions, such as incentives to reduce electricity emissions by 80% by 2030, rebates for “clean” vehicles and agricultural industry incentives, according to a Democratic aide.

There are downsides to a Democrats-only bill, also. Biden and Schumer — as well as Speaker Nancy Pelosi (D-San Francisco) — would have to keep nearly every Democratic vote.

The process of passing a Democrats-only bill — one that doesn’t allow for a Republican filibuster — is rife with legislative challenges. Policies have to be directly related to the budget to stay in the bill, meaning some policy proposals would likely be scrapped.

White House officials told House Democrats on Tuesday morning that they would give the bipartisan talks another week to 10 days to produce results, said Rep. John Yarmuth (D-Ky.), chairman of the House Budget Committee, which would be tasked with starting the process of enacting a Democrats-only bill.