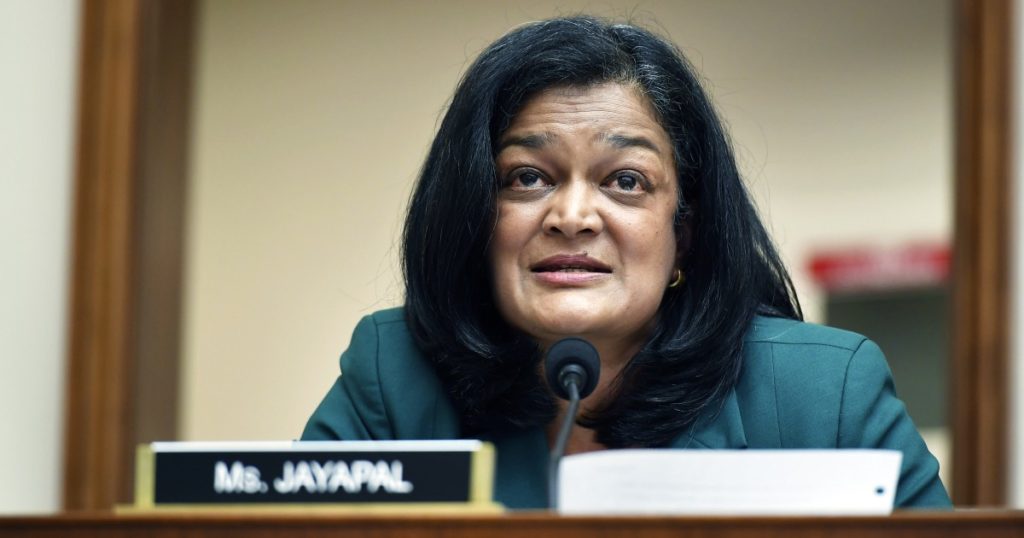 As he pursues his $4-trillion domestic spending wish list, President Biden has had a lot more than Republican opposition to contend with. He has found himself squeezed between two wings of his own party: progressives who want the biggest possible expansion of federal programs and moderates like Sen. Joe Manchin III of West Virginia who insist that legislation should be the product of bipartisan compromise.

Biden wanted both of those things. And on his first big project, an infrastructure bill, after weeks of haggling, he actually managed to strike a deal with Republicans.

The problem was that it reduced his initial $2-trillion proposal to only $579 billion in new spending, and that didn’t sit well with progressives. They responded by staging a near-revolt, threatening to vote down their own president’s infrastructure bill in the House of Representatives.

After frenzied mediation among Democrats, the breach was papered over last week. House Speaker Nancy Pelosi (D-San Francisco) promised her rebellious progressives that the infrastructure bill wouldn’t be their only chance to vote for new spending and that a budget bill this fall will include the rest of their wish list. That seemed to appease them for now.

“We’re moving forward,” the chairwoman of the Congressional Progressive Caucus, Rep. Pramila Jayapal (D-Wash.), told me. “We’re not going to get everything we want … [but] we are getting a substantial investment.”

None of this can be fun for Biden, but he actually has something to celebrate. Almost lost in the infighting was a remarkable fact: Party infighting aside, the president appears increasingly likely to push through domestic spending increases of at least $1 trillion, something that would have been unthinkable only a few years ago. Even moderate Democrats seem to have accepted the premise that the federal government’s success in combating COVID-19 and jump-starting the economy has made big government more popular than it has been since World War II.

Manchin, a fiscal hawk within his party, had this to say last week: “There’s a lot of need out there, whether it be child tax credits, whether it be helping kids have a start in life, whether it be fixing a lot of the human infrastructure that has fallen by the wayside. … I’m all for that. To what degree? We’ll see what we’re able to pay for.” He said he could support “$1 trillion or $1.5 trillion or $2 trillion,” as long as it isn’t paid for through borrowing.

For comparison, when President Obama passed an economic stimulus bill in 2009 to soften the effects of the Great Recession, he told his aides to keep the price tag below $1 trillion because moderate Democrats recoiled at the number.

Earlier this year, Biden proposed a $2.2-trillion jobs and infrastructure plan and a $1.9-trillion package focusing on education, child care, housing and other domestic programs, for a total of about $4 trillion.

This month, Sen. Bernie Sanders of Vermont, chairman of the Senate Budget Committee, floated the idea of combining those plans with a major expansion of Medicare to produce a package that would come to about $6 trillion.

So the taboo against big numbers appears to have disappeared.

Political scientists might call this a shift in the “Overton window,” the range of policy ideas that politicians consider viable. The theorem is named after Joseph Overton, a conservative scholar who developed it in the 1990s.

“I do think the progressive movement has shifted that Overton window,” Jayapal said. “I think it is a significant moment.”

Another member of the progressive caucus, Rep. Katie Porter of Irvine, offered an example.

“We are now in conversation about things that families need … that maybe 10 or 20 years ago, people would say, ‘Well, that’s just too expensive,’” she told me. “We are talking about child care, something our federal government last made a big, thoughtful investment in during World War II.”

The battles for Biden aren’t over, of course. Manchin’s $1 trillion or $2 trillion is a long way from the president’s $4 trillion, not to mention Sanders’ $6 trillion.

Because the Senate is divided 50-50, Democrats will need all their members plus the tiebreaking vote of Vice President Kamala Harris to pass a spending bill. That’s under the process known as “budget reconciliation,” in which tax and spending measures are exempt from the filibuster rule that requires 60 votes for a bill to move forward.

In the 50-50 Senate, any one moderate Democrat — not only Manchin, but also Kyrsten Sinema of Arizona or Mark R. Warner of Virginia — can limit new spending simply by announcing the maximum they will support.

If Manchin sticks to his insistence that new spending cannot be paid for by deficit spending, that’s likely to keep his ceiling at $2 trillion or below.

But that’s still a bigger number for domestic programs — green energy, child care, healthcare, paid family leave, education and affordable housing — than Congress has ever passed in a single bill.

After all their infighting, the Democrats, including Manchin, appear to have reached consensus on one thing: They’re all willing to support a reconciliation bill that includes some of Biden’s domestic priorities. That makes the chances for a history-making price tag pretty good — even if it’s smaller than the president or progressives hoped for.