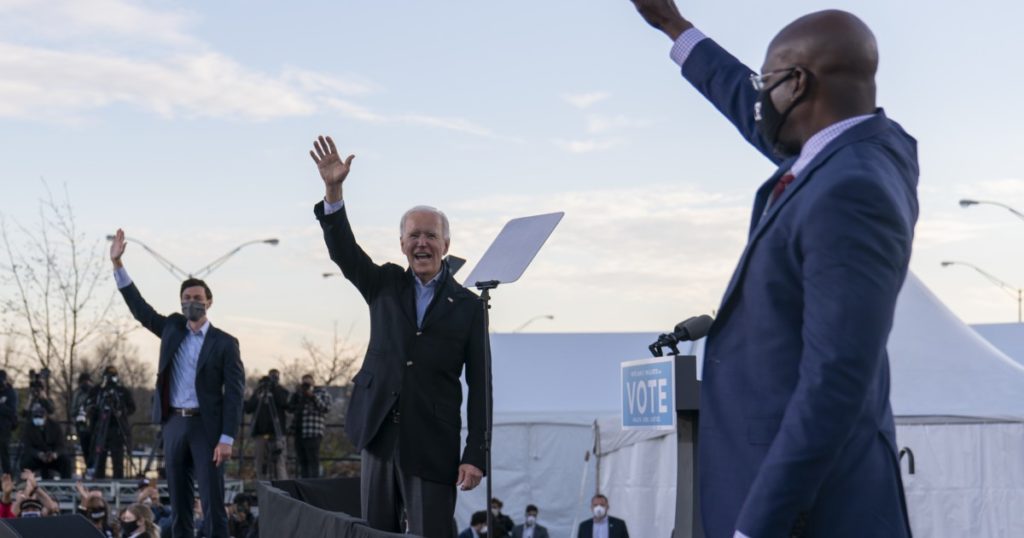 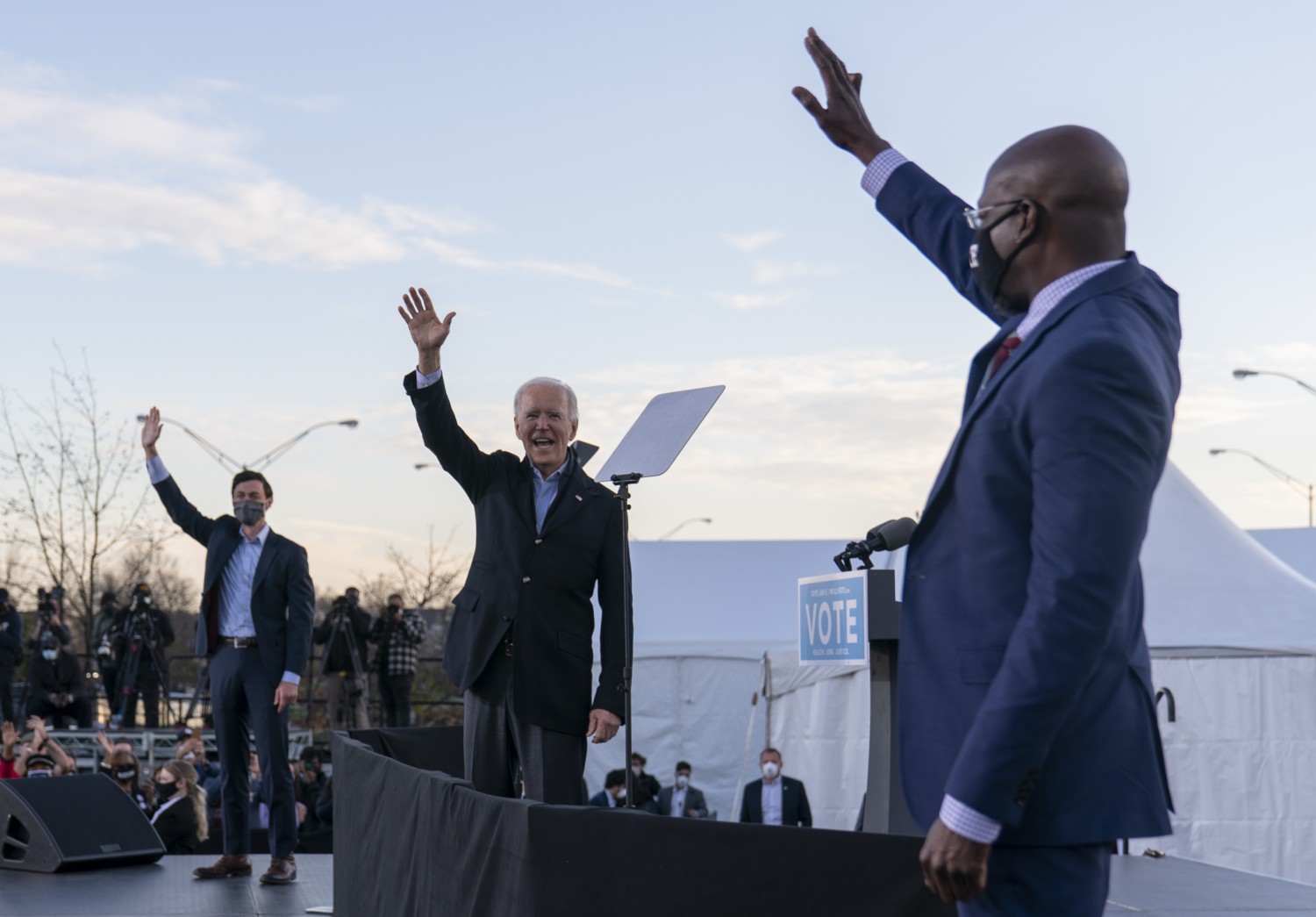 Xavier Becerra’s path to President-elect Joe Biden’s Cabinet looks smoother, $2,000 relief checks for Americans may be significantly more likely, and a passel of Trump-era regulations got shakier Wednesday as advocates and strategists began calibrating how Democratic control of the Senate would reshape the new administration’s path.

Democratic control in both chambers of Congress would be narrow — the widely expected but still-unofficial victories by the Rev. Raphael Warnock and Jon Ossoff in Georgia would get the party only to a 50-50 tie in the Senate, with incoming Vice President Kamala Harris able to cast the deciding vote.

Biden, in his first statement after the Georgia vote, continued to stress his theme of reaching across the partisan aisle to work with Republicans, eschewing the more confrontational approach pushed by many on the party’s left.

“It looks like we will emerge from yesterday’s election with Democratic leadership in the House and the Senate, and of course I’m pleased,” Biden said. “But I’m also just as determined today as I was yesterday to try to work with people in both parties — at the federal, state, and local levels — to get big things done for our nation.”

Despite that low-key reaction, however, the apparent Georgia results changed Biden’s calculations across a wide range of issues.

Until Tuesday’s election, Biden faced the prospect of being the first Democrat since 1885 to enter the White House without his party controlling both houses of Congress. Now, by contrast, Democrats are expected to have the power to decide what bills and nominations — judicial and executive branch — come to the Senate floor.

“The ceiling of possibilities is now way higher on every issue that progressives care about,” said Adam Green of the Progressive Change Campaign Committee. “At least now we can get a vote.”

The good news for Biden is that the top item on his legislative agenda unites his party’s factions and has potential to win bipartisan support: Addressing the urgent needs of the country’s health and economic crises.

“Biden only has one thing he has to do: end this pandemic,” said Elaine Kamarck, a Brookings Institution scholar who is a member of the Democratic National Committee. “If he does that, there will be smooth sailing. The economy will look very good in a year, and he will have a lot of good will to do the broader Democratic agenda.”

Some of the most ambitious demands of the party’s left may take a back seat to more immediate concerns like economic relief payments, expanded unemployment benefits and aid to renters.

“The lesson of Georgia is that when you fight hard for things working people need, you win,” said Nelini Stamp, director of strategy for the progressive Working Families Party.” Are there a lot of things that are tricky about a 50-50 Senate? Absolutely. Are there a lot of issues pushed to the forefront because our community’s been suffering? Absolutely.”

The first concrete result of the election came with news, first reported by Politico, that Biden has decided to choose Judge Merrick Garland of the D.C. Circuit Court of Appeals, whom President Obama had tried to put on the Supreme Court, as his nominee for attorney general.

Biden had considered Garland for weeks, but Republican control of the Senate meant he risked not being able to replace the judge on the powerful appeals court. With that risk out of the way, Biden moved quickly to fill one of the last, big positions in his Cabinet. He’s expected to formally announce the decision Thursday.

Other Biden Cabinet nominees who had drawn GOP fire would also be early beneficiaries of the shift in Senate power.

Becerra, California’s attorney general, faced opposition from Republicans on his nomination to head the Department of Health and Human Services, in part because of his strong advocacy for abortion rights. Neera Tanden, Biden’s choice to head the Office of Management and Budget, also might have faced defeat in a Republican Senate, but likely will prevail in a chamber controlled by Democrats.

Down the road, the narrowness of Democratic control in the Senate would continue to stifle several progressive priorities, such as Medicare for all, leading to strains within the party’s ranks.

Such internal party divisions won’t be a problem, however, with a new coronavirus relief package, which Senate Democratic Leader Charles E. Schumer of New York, poised to become majority leader, said Wednesday would be “one of the first things” the new Senate would do.

Biden repeatedly has referred to the $900-billion bill Congress passed last month as a “down payment,” and has called for a $2-trillion package that would include money to help states and local governments expand vaccine-delivery programs, additional unemployment benefits and a larger round of direct checks to families. Senate Republican Leader Mitch McConnell of Kentucky had made clear he opposed that idea and would try to block it if he remained majority leader.

Later in the year, Democratic legislative strategists aim to put together a major tax and spending package that would repeal many of President Trump’s tax breaks for wealthy Americans and corporations. There’s also widespread Democratic support for Biden’s proposals for new spending on renewable energy and improvements to the nation’s roads, bridges and other infrastructure, which he argues would generate millions of jobs.

Schumer likely would try to pass that package through the Senate under budget rules that avoid the possibility of a filibuster — the same strategy Republicans used to pass their big tax cut package in 2017.

Democrats could follow another precedent the GOP used early on in President Trump’s term — a law that allows Congress to wipe out rules that an administration proposed in its final months in office. Many of Trump’s final measures to cut back environmental protections or deny benefits to immigrants could be subject to reversal using that process.

Other Democratic priorities, however, will still face the filibuster hurdle, which requires 60 votes to advance bills in the Senate, unless Democrats move to abandon the long-standing rule, as some predict they will.

House Speaker Nancy Pelosi (D-San Francisco) stressed one of those priorities in a morning call with Democratic House members: “We have to pass a Voting Rights Act,” she said, according to a person with knowledge of the call who was not authorized to comment publicly.

Passage of the voting rights measure, which Democrats have named after the late Georgia Rep. John Lewis, has been a top priority for the party. It has gained additional momentum because of the outsized role that Black voters played in the Georgia outcome.

Democratic strategists believe that if they bring the bill to the floor and Republicans try to block it, that could build the case for eliminating or sharply scaling back legislative filibusters — a major progressive priority that currently lacks enough Democratic support to pass.

“Joe Biden has to go big. We have two years. Where you have control, there are a lot of people looking for return on investment, particularly Black and brown voters and Native American voters,” said Bakari Sellars, an attorney and former South Carolina legislator. “Even if we don’t have 60 voters, at least we get to have the debates.”

Control of the Senate also will mean control of its committees, which Republicans could have used to hold hearings hostile to the new administration, such as investigations of the business dealings of Biden’s son Hunter.

Ironically, the campaign that Georgia Republicans waged centered on evoking fear that Democratic control of Congress would advance a “radical liberal agenda,” including expansion of the Supreme Court to “pack” it with liberal justices and statehood for the District of Columbia.

Those measures are unlikely to make it through a 50-50 Senate because they are opposed by the Democrats’ more conservative members, like Sen. Joe Manchin of West Virginia.

Faiz Shakir, who was campaign manager for Vermont Sen. Bernie Sanders’ presidential run, said, however, that centrist members are not the only senators with outsized influence in an evenly divided Senate, noting the role that Sanders played last month in elevating the idea of increasing the size of coronavirus relief checks.

Biden and the party would be best served by focusing quickly on pocketbook issues, like the $2,000 stimulus checks, and not get bogged down on issues that divide them, he said.

“We should not fight over what we can or cannot afford,” Shakir said. “We should fight instead for what will immediately improve people’s lives.”