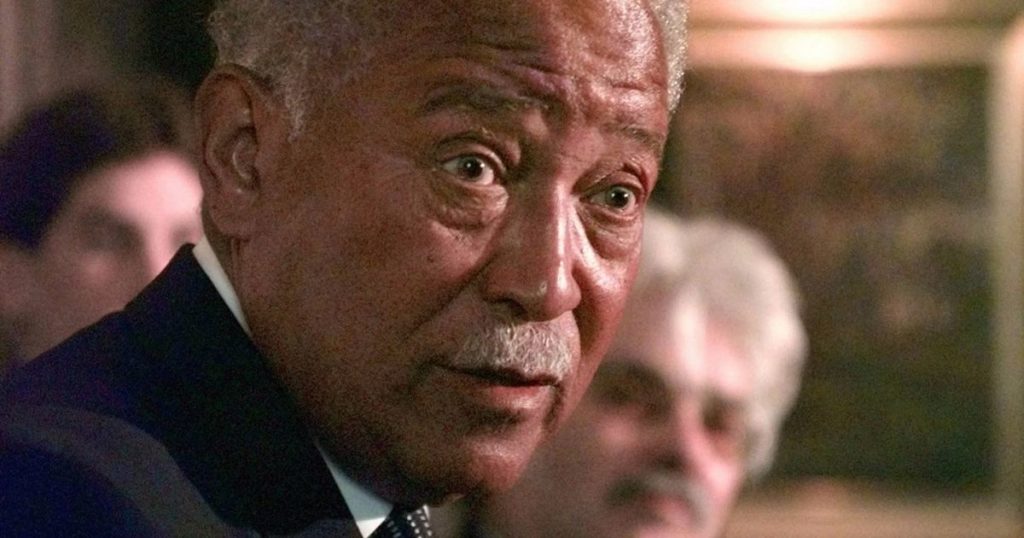 When New Yorkers went to the polls in November 2013 to elect their first Democratic mayor in more than 20 years, David Dinkins was determined to take part, even though he was hospitalized with pneumonia.

Dinkins, who occupied the mayor’s mansion from 1990 to 1994, voted from his bed for his one-time aide, Bill De Blasio, and lived to see the city he called a “gorgeous mosaic” of racial and ethnic diversity back where he wanted it: in the hands of a liberal Democrat with broad appeal among the city’s people of color and working class.

It was sweet revenge for Dinkins, the only Black mayor in the city’s long history, who died Monday, according to the Associated Press.

“The Democrats are back, big time,” he said in a phone interview shortly before De Blasio’s election.

Dinkins served only one term before his ignominious defeat against Republican Rudolph Giuliani, leaving behind a complicated legacy.

The Dinkins administration is linked to some of New York’s ugliest images: the 1991 Crown Heights riots involving Black residents and Hasidic Jews in Brooklyn; graffiti-scarred subways; crime-ridden streets; a secession effort by the Republican-dominated borough of Staten Island.

They remain, in many New Yorkers’ minds, symbolic of a disastrous administration.

But it is an association that Dinkins said was unfair and that he challenged to his dying days as he tried to undo his reputation as the one-term mayor whose lapses paved the way for Republican rule in this overwhelmingly Democratic city.

“One has to remember that when I lost in 1993, it was by a very narrow margin,” said Dinkins, clearly rankled by the memory. “I might well have won had there not been the Staten Island secession item on the ballot. It should never have been there.”

In his 2013 memoir published, “A Mayor’s Life: Governing New York’s Gorgeous Mosaic,” Dinkins also blamed his election loss on racism, accusing his opponents of fueling white fears of entrusting the city to a Black man.

But Dinkins also acknowledged he had made grave errors that clouded his successes — including a policing initiative that set crime rates on a downward path — and that gave opponents ammunition to cast him as a weak and ineffective leader.

Chief among those errors was his failure to move quickly to quell racial animosity surrounding two key events under his watch: the Crown Heights riots, which lasted four days; and the so-called Red Apple Boycott of 1990, in which Black leaders boycotted Korean-run grocery stores in Brooklyn.

A scathing 1993 state report on the Crown Heights violence, which erupted after a car driven by a Hasidic Jew struck and killed a 7-year-old Black child, said Dinkins “failed to act in a timely and decisive manner” to end the unrest.

Dinkins, though, said he was led by police brass to believe that things were not as serious as reports from the scene indicated, and he waited three days before sending riot police into the neighborhood. When Dinkins himself visited Crown Heights, Black residents angry that the Jewish driver had not been arrested booed him. Jewish leaders accused Dinkins of failing to protect them from rioters, who hours after the little boy had been run down attacked and fatally stabbed a Jewish man on the sidewalk.

At a news conference after the 600-page report came out, Dinkins took responsibility for the fallout. “Mistakes were made and I accept that,” said Dinkins, who was just four months away from facing Giuliani in his reelection bid.

Dinkins also admitted that he had not moved quickly enough to resolve the Red Apple Boycott, which lasted several months.

The incidents severely undermined Dinkins, who at his inauguration in 1990 had pledged to be “the mayor of all the people,” and some political experts say they unfairly cloud his legacy.

“Things were bad, but they were bad everywhere. Every single major city was dealing with crack cocaine. The baby boomers were moving to the suburbs. It wasn’t just white flight – it was middle-class flight, and Dinkins inherited all of this,” said Christina Greer, a political scientist at Fordham University.

Giuliani was able to capitalize on the Crown Heights report and on lingering crime fears, even though violent crime began a steady decline under Dinkins. Under Dinkins’ predecessor, Ed Koch, who served three terms, New York’s murder rate soared to a peak of 2,245 in 1990.

David Norman Dinkins was born July 10, 1927, in Trenton, N.J. His father, William, was a barber who later turned to selling real estate. His mother, Sarah, was a domestic worker, “cooking and cleaning for white folks for a dollar a day,” Dinkins wrote in his memoir. She left her husband when David and his sister were in elementary school and moved with them to Harlem, where decades later Dinkins would join the circle of Black Democratic leaders, including Charles Rangel, who were making their name in politics.

Dinkins later returned to Trenton to live with his father. World War II was raging when Dinkins graduated from high school, so he decided to enlist in the Marines.

The war ended while he was in training, and Dinkins went on to Howard University in Washington, D.C., where he earned a math degree and met his wife, Joyce Burrows. The couple moved to Brooklyn, where Dinkins obtained a degree from Brooklyn Law School and went into private practice.

Dinkins’ climb to the pinnacle of city politics was slow and methodical, beginning with his 1965 election to the state Assembly. By 1975 he had been appointed city clerk in New York, which launched him on a bid to become the Manhattan borough president. It took him three tries before he finally won the post, in 1985. In between, he served as president of the city’s Board of Election.

His progress might have been faster were it not for his failure to file tax returns from 1969-72 — a fact not revealed until then-Mayor Abraham Beame named Dinkins deputy mayor for planning. Dinkins was forced to give up the position after a background check exposed the tax issue.

“I did not seek to evade payment of taxes, but I neglected,” a tearful Dinkins said at the time.

Dinkins always said his decision to run for mayor did not come lightly. Koch was in his third term, and the once-popular mayor’s avuncular phase was long-gone. Koch was seen as increasingly abrasive and driving a wedge between Black and white residents.

Dinkins, meanwhile, was known for his courtly manner, dapper dress, and meticulous grammar and speaking style, which represented a refreshing change for many New Yorkers. His friends and political allies decided it was time to take on Koch, so Dinkins agreed to run.

“I am running because our city has become sharply polarized,” Dinkins said as he announced his candidacy. Promising to lead New York “in the new direction we so desperately need,” Dinkins added: “New Yorkers are tired of politicians who talk tough but act only after problems reach crisis proportions.”

Those were words that would come back to haunt him in the aftermath of racially charged episodes that followed his election, and that Dinkins sourly predicted would dominate his obituaries.

The opening paragraph, he said in a 2010 radio interview, would mention his death. “And then immediately, Crown Heights,” Dinkins said.

He is survived by his wife and two children, David Jr. and Donna.