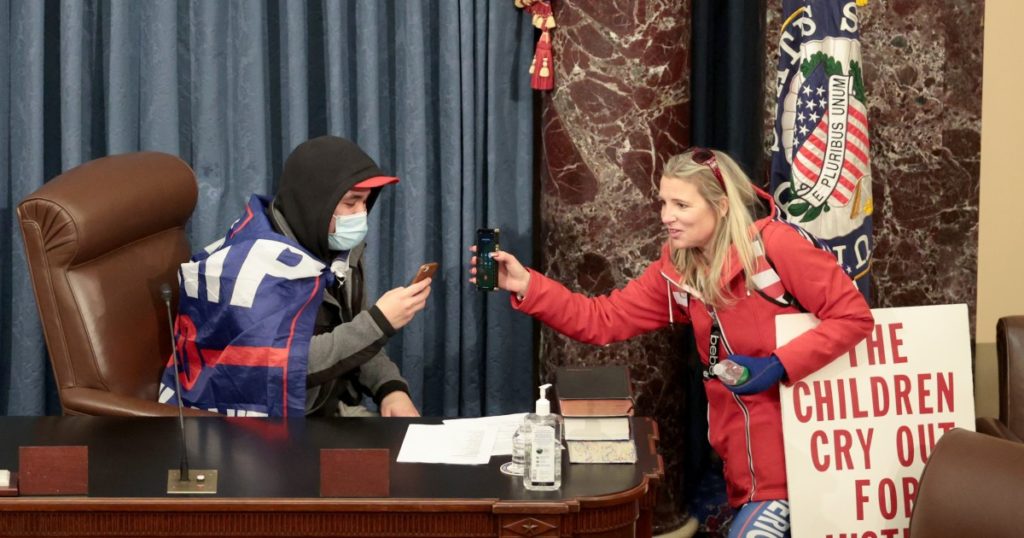 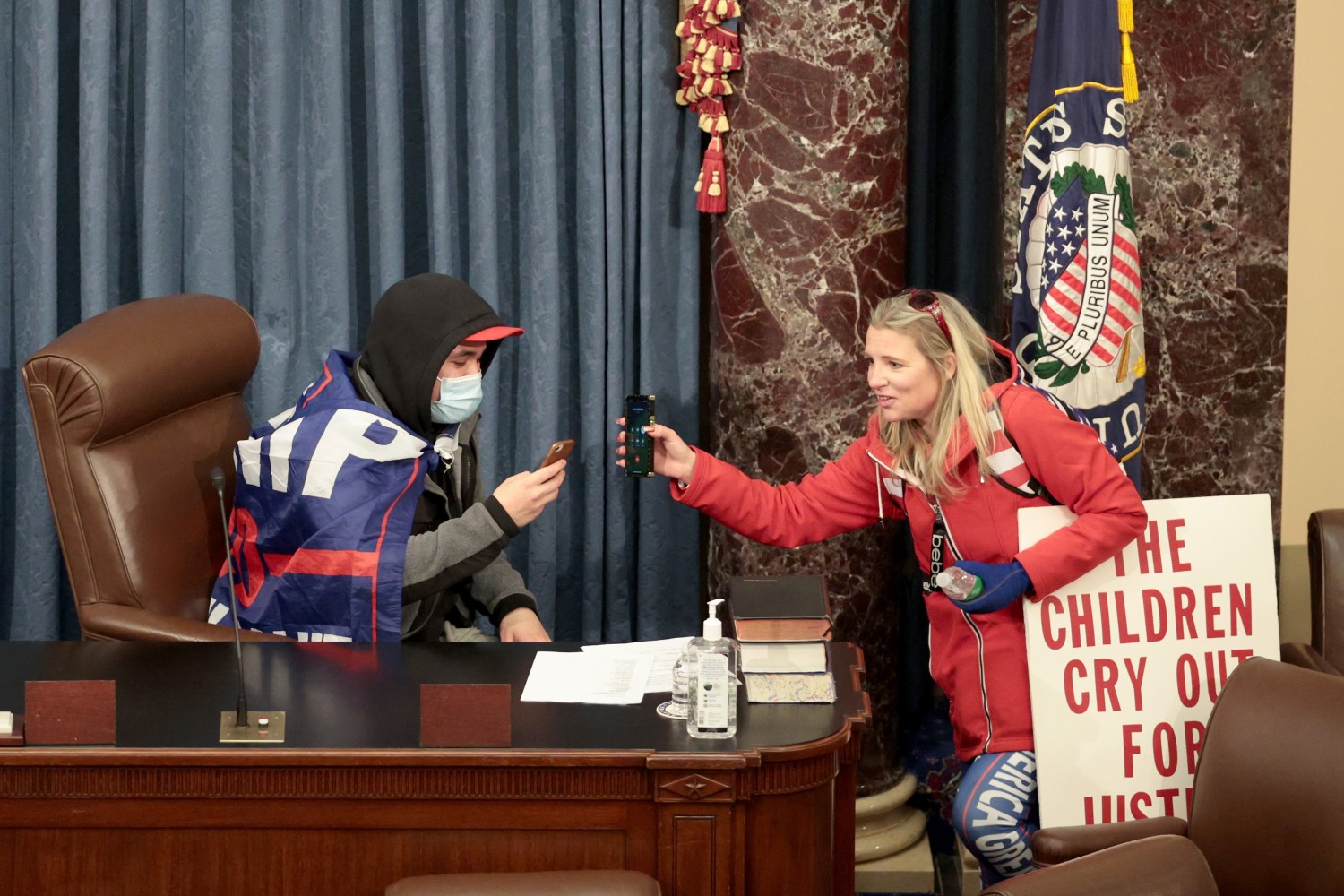 Jan. 6, 2021 is now — or so we have been told — a day that will live in infamy. And certainly infamy, n. “the state of being well known for some bad quality or deed,” feels accurate.

But Wednesday was also the Feast of the Epiphany, and epiphany n. “a moment of sudden revelation of insight” is just as accurate. Democracy was threatened, specifically and spiritually, by anti-American domestic terrorists, incited by a sitting president and several members of Congress, and while the world gasped and gagged, democracy held.

So a bad news/good news day, really, and one that revealed exactly what America is — a democratic country being threatened from within by people who are not at all interested in living in a democracy. And those people are now easily identifiable — the officials who took part have done little to hide their intentions and the members of the extremist mob that illegally broke into the Capitol building spoke into cameras and took selfies. Like every villain in every story, many of them even monologued. “We were normal, law-abiding citizens,” one man shouted at an iTV reporter after coming through the Capitol’s broken door. “The government did this to us.”

“We’re storming the Capitol,” said a woman, upset that she had been pushed out and maced. “It’s a revolution.” Identifying herself as “Elizabeth from Knoxville,” she quickly went viral.

As shocking as the day’s events were, we’ve seen this kind of final reveal before, many times. It’s the kind of moment on which so much of our storytelling hangs — when “The Manchurian Candidate” realizes what he is or “L.A. Confidential’s” kindly police chief is unmasked as a criminal mastermind. It is Andy Griffith’s media personality in “A Face in the Crowd” unknowingly spewing his mockery of the “sheep” who follow him into a live mic, and Thanos explaining that he murdered half the living creatures on Earth to save the world.

Movies and television series are filled with corrupt leaders and their lackeys, historical and fictional, who leverage warped patriotism and civic complacency to further their personal power and oppressive intentions. Watching them, we anxiously await the narrative guideposts, the musical cues that assure us their true intentions will soon be laid bare, resulting in their downfall and a restoration of justice and order.

(“Tiny Dancer,” which the mobblasted on loud speakers at the National Monument before it began its march into domestic terrorism is, it must be said, an unexpected soundtrack choice for an insurrection, and I’m sure Elton John will have a thing or two to say about it, possibly in court.)

Timing-wise, this unprecedented event is, one hopes, the penultimate episode of the Trump presidency, though there are still two weeks before Joe Biden and Kamala Harris are sworn in, so it could also become the kind of midseason event that “Game of Thrones” made famous. But if Jan. 6, 2021 wasn’t a big, conclusive reveal for every citizen not actively working to overthrow democracy, then Americans have willingly surrendered the power to control their own narrative.

Just to recap: On Jan. 6, 2021, soon-to-be former President Trump summoned a group of pro-Trump extremists to a rally he called “Save America.” Addressing the crowd, he repeated lies about the election being stolen by liberals, said he would “never concede” and told them to “go down there … and give our Republicans the kind of pride and boldness they need to take back our country.” So chanting, among other things, “Stop the steal,” members of the mob pushed past police and broke into the Capitol building in an effort to halt the legal and democratic certification of the election Trump had lost, legally and democratically, to President-elect Joe Biden.

In other words, Trump unleashed a mob on Congress and put the lives of many Americans and an entire branch of the federal government, along with his own vice president, in danger.

Indeed, members of the mob erected a makeshift gallows in sight of the Capitol building. While this was clearly a symbol of the group’s white supremacist beliefs, echoed by the Confederate flag one criminal carried into the Capitol, the president had, over the past few days and in his speech to the crowd, expressed his desire that Vice President Pence overturn the election, which Pence did (and could) not. So it’s not much of a stretch to believe the noose was intended, if only symbolically, for Pence.

Beyond chanting “USA,” looting and taking a bunch of selfies, however, these domestic terrorists — for such they became the moment they laid siege to a federal building — did not have much of a plan. The president was canny enough to not issue specific instructions beyond, you know, stopping “the steal,” saving America and not being “weak,” but several of the terrorists were carrying weapons and/or zip ties, so taking hostages was evidently not out of the question, and two pipe bombs and a cooler filled with Molotov cocktails were found near the Capitol during the occupation.

President-elect Biden, who believes in democracy, publicly deplored the actions of the mob and called for peace Wednesday, but soon-to-be former President Trump publicly praised those who had done his bidding until all forms of media, including those social platforms that Trump had used for years in an effort to avoid and vilify the free press, finally shut him down.

The terrorists were removed, Congress resumed the certification process, and at 3:40 a.m. EST — despite continued efforts by certain members of Congress, including Sens. Ted Cruz and Josh Hawley — Joe Biden and Kamala Harris were confirmed as the next president and vice-president.

They will preside over a Democrat-majority House and Senate because while Trump was assailing the founding principles of this country, the people of Georgia were upholding them, electing two Democratic senators in runoff races that the president had preemptively attempted to delegitimize

So bad news/good news. There are American citizens, including members of our own government, who have publicly demonstrated their desire to live in an authoritarian state, but their attempts to make this a reality through violence have thus far failed.

And now we know who they are. The faces of those who invaded the Capitol building, including the men who broke down doors and windows and the guy carrying that Confederate flag, are everywhere and, presumably, the FBI will be in touch with many of them shortly. (I’m really hoping for several night scenes involving helicopters, like when agents tracked down the guy who signaled gunmen during the assassination attempt in “The West Wing.”)

But even if we don’t get the satisfaction of televised SWAT team-assisted arrests, even if the 25th Amendment is not used to oust Trump from office, we now know that when Cruz, Hawley and the more than 100 Congressional representatives who voted against certifying the election results in several states are fundraising, running for reelection or, heaven forbid, entering the 2024 presidential race, they are doing so in the hopes of making this country something other than a democratic republic. And we will know who supports them in doing this.

Now we know that those right-wing extremists — the ones who claim that Black athletes taking a knee during the national anthem to protest racism are “disrespecting the flag” — will use that same flag to attack our seat of government and threaten the lives of our elected officials. Now it is impossible not to see their use of the word “patriot” as the ultimate doublespeak, the nationalist claim used by fascists everywhere. Now we know that everyone who started and spread conspiracy theories about the validity of this election was simply attempting to overthrow a democratically elected president and put a dictator in his place. And I absolutely include Lou Dobbs and Sean Hannity in this list as well as anyone who still watches them.

And don’t pull any false equivalencies because you will just look stupid. Liberals angry over Trump’s election never stormed the Capitol building, smashed its windows and took selfies with their feet up on Mitch McConnell’s desk. They wore pink pussyhats and marched peacefully; they said “not my president,” which is not at all the same as saying “not the president.”

On Thursday afternoon, Trump, facing many calls for his ouster via the 25th Amendment or impeachment, did finally concede his defeat in the 2020 election. He also said, with a straight face, that he would work toward a peaceful transition of power. But it’s too late.

The events of Jan. 6 left no room for vacillation, and those who attempt to minimize or excuse the behavior are simply acknowledging their support of its aims.

The curtain has been pulled back, the mic has been made live and the gun in the gallery clearly visible to absolutely everyone. Guess what? Thanos’ plan to make the world better is not about making the world better. Ignorance, misunderstanding, claims of party divisions are no longer applicable — the division is not about big government versus small, it’s about democratic government versus dictatorship. This is not about the grievances, real and imagined, of small town America or the danger of elitist bubbles, real and imagined, of coastal cities. This is about people who believe America won’t be great again until representative democracy is not just suppressed through racist voter restrictions and regional gerrymandering but completely destroyed.

So now we all know. For sure. And how this story ends is up to us.