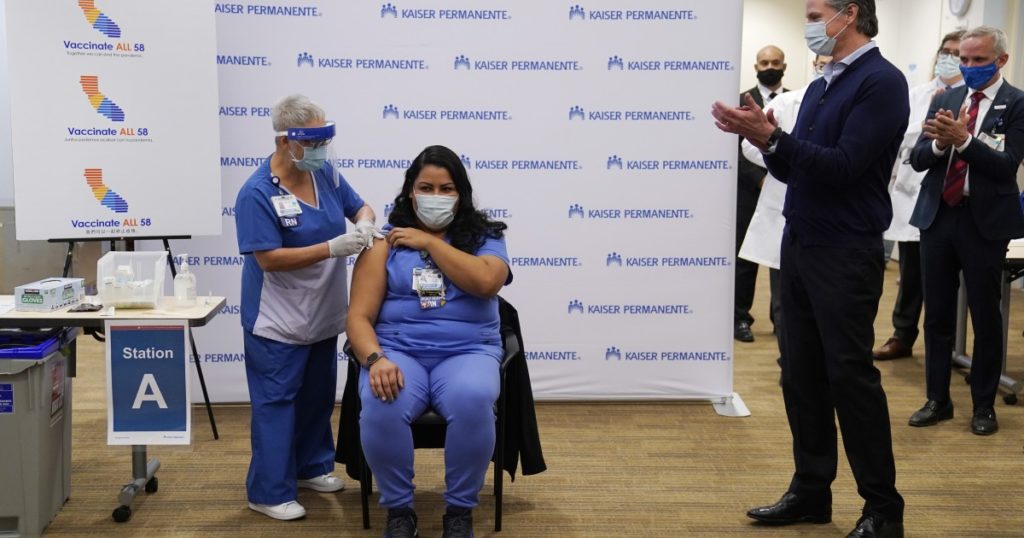 Gov. Gavin Newsom stood in front of local government leaders and lawmakers in Fresno on Friday and told Californians the state had taken swift action to reallocate thousands of COVID-19 vaccine doses from a provider who “was not administering the vaccines quickly enough.”

“And yes, forgive me, we decided to send them to the Valley because you deserve them,” Newsom added.

It wasn’t the first time Newsom had publicly said the state was asserting its authority to ensure life-saving doses were not languishing on drug store shelves, going unused. Last month, Newsom said the state reallocated 200,000 vaccine doses because a large pharmacy chain was “sitting on those doses.”

But in those two instances, the companies in question are objecting to Newsom’s comments, saying it was their own efforts that flagged the unused doses for the state.

A California Department of Public Health representative identified Walgreens and CVS Health pharmacies as the companies in the two examples referenced by Newsom last month. Both received doses in the federal pharmacy partnership for vaccinating long-term care patients and facility staff, in which doses were allotted based on the number of beds in a facility and an estimate of total staff working there. The companies say they ended up with thousands of extra doses due to the federal formula for allocating vaccine for that program and because fewer than expected staff opted to be inoculated.

Because of that, representatives for Walgreens and CVS said Newsom’s characterization that the state stepped in and removed its doses due to poor performance is simply not true.

Walgreens spokeswoman Jessica Masuga said that the pharmacy chain “determined that we would not need the 34,000 doses for the long-term care facility clinics and so they were reallocated by the state.”

“Criticism that CVS Health is sitting on doses or not administering them fast enough is inaccurate and misinformed,” CVS spokeswoman Monica Prinzing said.

Newsom had indirectly criticized CVS Health during a news conference Feb. 8, saying the state reallocated 200,000 doses in the possession of one of the state’s largest pharmacy chains.

“We were able to quickly and efficiently and effectively move those doses out because, frankly, they were sitting on those doses,” Newsom said of CVS.

State public health officials said the CVS incident Newsom referenced involved closer to 180,000 doses. Prinzing said it was CVS that “proactively reached out to the state to repurpose 180,000 doses.” She added that in most cases, excess doses were never in the pharmacy’s possession.

“Following that outreach, Governor Gavin Newsom’s decision to transfer vaccine from the long-term care pharmacy partnership to other vaccine providers in the state helps ensure these valuable doses will be put to the best use — which is exactly what we hoped for as the ideal next step,” she said.

The governor’s office declined to answer questions about the accuracy of Newsom’s comments, instead providing a general statement from the California Department of Public Health.

“The Governor has been very clear that it’s not acceptable for vaccines to be sitting in freezers when they can be providing life-saving protection for our seniors, teachers, health care workers and others,” the statement read. “While the vast majority of providers are working hard to administer vaccines as quickly as possible, when doses are sitting unused, the state has reclaimed and reallocated those vaccines so they can administered promptly.”

The Times requested details on when the state has reallocated unused doses, but that information has not yet been released.

Newsom has faced criticism for the state’s slow vaccine rollout and for data that suggested much of California’s supply appeared to be sitting on shelves in January. County health officers have blamed state reporting issues, saying inaccurate and delayed data showed more unused vaccine in providers’ hands than actually existed.

The governor said the state has been scrutinizing every provider and system to make sure all vaccine is being used, a process that is ongoing.

As of Monday, the state has administered more than 9 million first and second doses of vaccine. California is in the process of handing over administration of its vaccine program to Blue Shield of California in a move Newsom said will provide “transparency, more accountability.”