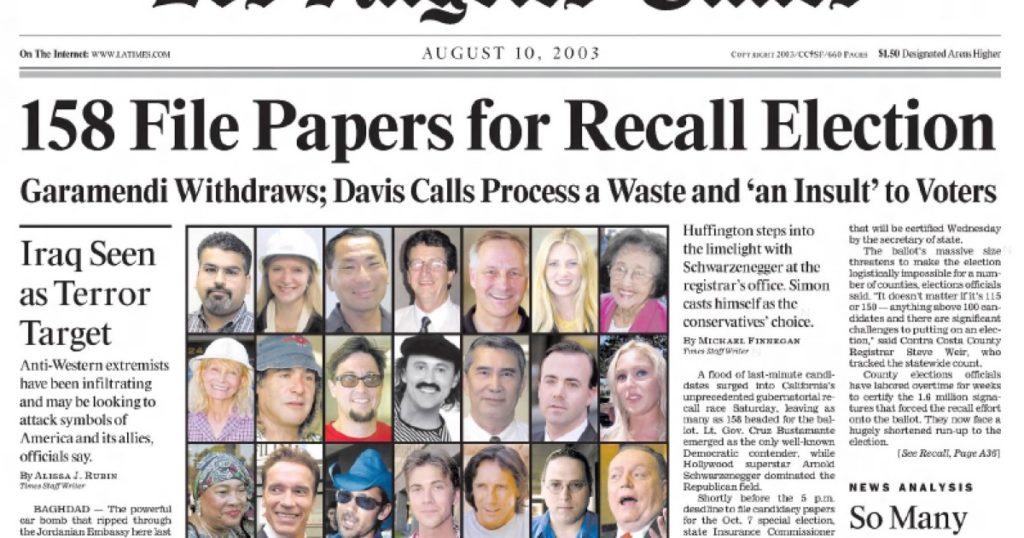 About eight years ago, Sacramento resident Marc Valdez threw a most unusual party. He invited a band of brothers and sisters of different political stripes. Democrats, Republicans, Libertarians, Greens. Independents, American Independents, and even people from something called the Natural Law Party.

The only thing that bonded the guests was their role in California’s crazy election season of 2003, when voters booted out Gov. Gray Davis in a historic recall. You wouldn’t recognize the names of the people who showed up at this shindig. But you’d remember some of the others who crashed Davis’ party to pop his political balloon: Gary Coleman, Larry Flynt, Arianna Huffington or some of the 132 other D-list celebrities and randos who ran to replace the unpopular governor.

The eventual winner, of course, was Arnold Schwarzenegger. Cheryl Bly-Chester, who attended Valdez’s party, got the most votes among his guests. She finished 17th overall — a mere 4.19 million votes behind the “Terminator.”

But their brush with history nevertheless makes these most anonymous of recall alumni an important voice today as current Gov. Gavin Newsom faces his own reckoning. (Or would that be a recall-ning?) Anti-Newsom activists want to channel the populist winds of 2003 that Valdez, Bly-Chester and others kite-surfed and send Newsom off to his political Bermuda Triangle.

So you might think that these folks would understand and sympathize with the anger that voters have toward a governor accused of gross negligence during hard times. They’re a great California slice of political, geographic and ethnic diversity. But when I rang up five of them, not a single one supported the recall.

“I support Newsom 100%,” said Valdez, a Democrat. “The people who are most active against Newsom are the same people who invited over their relatives for Thanksgiving, so they’re trying to burn off their guilt by burning a witch or two.”

“If it wasn’t for COVID, it wouldn’t happen,” said Darin Price, who ran as one of two Natural Law Party candidates in the Davis recall. “He’s being as thoughtful as anyone could be. The bar should be fairly high for recall, but it’s not here.”

“I respect the more than 2 million people who have signed [the recall petition] for exercising their constitutional right,” said Badi Badiozamani, a San Diego author and declared independent. He declined to say whether he was one of them, saying he was “divorced from politics.”

“We think Newsom has a lot of holes,” said C.T. Weber, a Peace and Freedom Party member then and now. “But we’re against it for the racist right-wing reasons that its supporters are putting out there.”

“I don’t think that he’s doing a great job as governor, but I’m not signing it,” said Bly-Chester, an El Dorado County planning commissioner who said “the Republican Party left me” in 2016 and is now “decline to state.” “This [recall] election won’t mean anything.”

Yes, this is a small — scratch that — teeny, tiny sample from the legions that joined the 2003 race like it was the L.A. Marathon. But it’s an important one, and one to which I can relate.

I covered the recall as a cub reporter, and voted yes then. I think I picked billboard legend Angelyne as governor. Or was it the comedian Gallagher? Anyways, I found Davis ineffectual and weak and found no reason to support him or oppose his recall. Even his most ardent defenders mustered up all the enthusiasm of someone replacing their car brakes.

That change-in-the-air feeling isn’t blowing across the Golden State the way it did in 2003. Newsom’s critics despise him — a not-insignificant part of the California electorate. But Democratic leaders will vocally stand by their well-coiffed man. If we continue to reopen and get as close to normal as we ever can by the fall — which seems increasingly likely, thank God — only Republicans will still care about kicking him out.

Successful recalls are born from widespread, bipartisan frustration, not from a dying political party that has relied on cataclysms to win statewide elections in California for the past generation.

“There was, from north to south, east to west, a real dislike for Davis and a thought that someone should do better,” said Price, who still lives in Humboldt County. “There’s people who don’t like Newsom now, but [the anger] is not as widespread as back then.”

“Everything bad was personified in Gray Davis,” Badiozamani said. “He was not a charismatic person, whereas Newsom is. And Gray was seen as a bureaucrat, whereas Newsom is handsome and presentable, which can help.”

“He’s not doing the worst,” said Bly-Chester, while adding that his “almost arbitrary” decisions mean “he’s not the governor for a large portion of the state.”

“In 2001 you had Gray Davis wasn’t taking action when action was clearly needed,” Valdez said. “Today, the story on Newsom is that he’s been too aggressive with the lockdown and quarantines. But a lot of people think it’s good to have the California governor having enough power to look some of these rich people in the face say, ‘No, you’ve got to close.’ No one supported Davis doing nothing.”

And yes, Newsom’s maskless dinner at the uber-elite French Laundry looked bad because it was bad. But we just survived four years of a president who makes Newsom look like Mister Rogers in the personal responsibility department.

Successful recalls need to get people like me. I’m no fan of Newsom’s ham-fisted governance during our pandemic year — but it’s far better than the hands-off approach most of his critics would have favored. And most of the people I know who can’t stand Newsom hate the Republican Party even more. It’s a zero-sum game with no nuances — the opposite of how 2003 felt.

That hyper-partisan reality is another reason that Bly-Chester, Badiozamani and Valdez don’t look forward to a potential, and at this point increasingly likely, recall vote. While the world treated them and their fellow rivals as a circus of fools when they joined the recall race in 2003, they saw it as a beautiful expression of American democracy, one that just doesn’t exist today.

“We [minor candidates] had to band together in order to make our voices heard,” Valdez said. He ran back then because he believed “nobody was in charge anymore” and wanted to do something about it. “We had, in many cases, nothing in common. Now, it’s just a different situation, different time.”

“One of the best things that I learned at the beginning of my stay here in this country is the saying, ‘Let’s agree to disagree,’” said Badiozamani, an immigrant from Iran. “I miss those days. Now, everyone is bad and needs to be banished if they’re against you. That’s unfortunate.”

Bly-Chester remembered when dozens of candidates met before a Bay Area news conference to figure out how to get media members to take them seriously.

“We identified one person from every party,” she said. “We each had a line to say for an official statement and did it. All across party lines. It felt really good.”

Likelihood of that happening today? The sad truth: About as high as House Speaker Nancy Pelosi (D-San Francisco) and Rep. Devin Nunes (R-Tulare) holding hands and singing “We Are the World.”