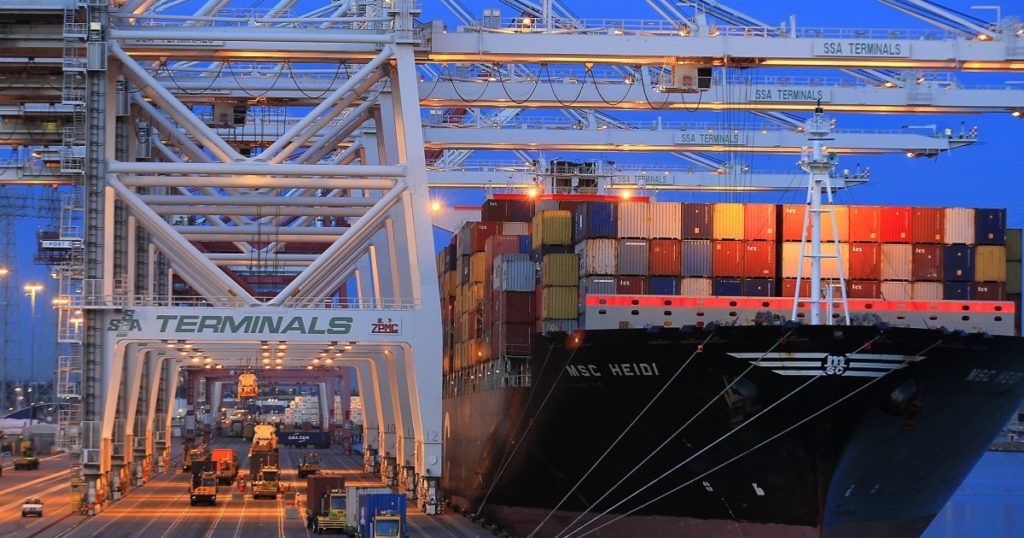 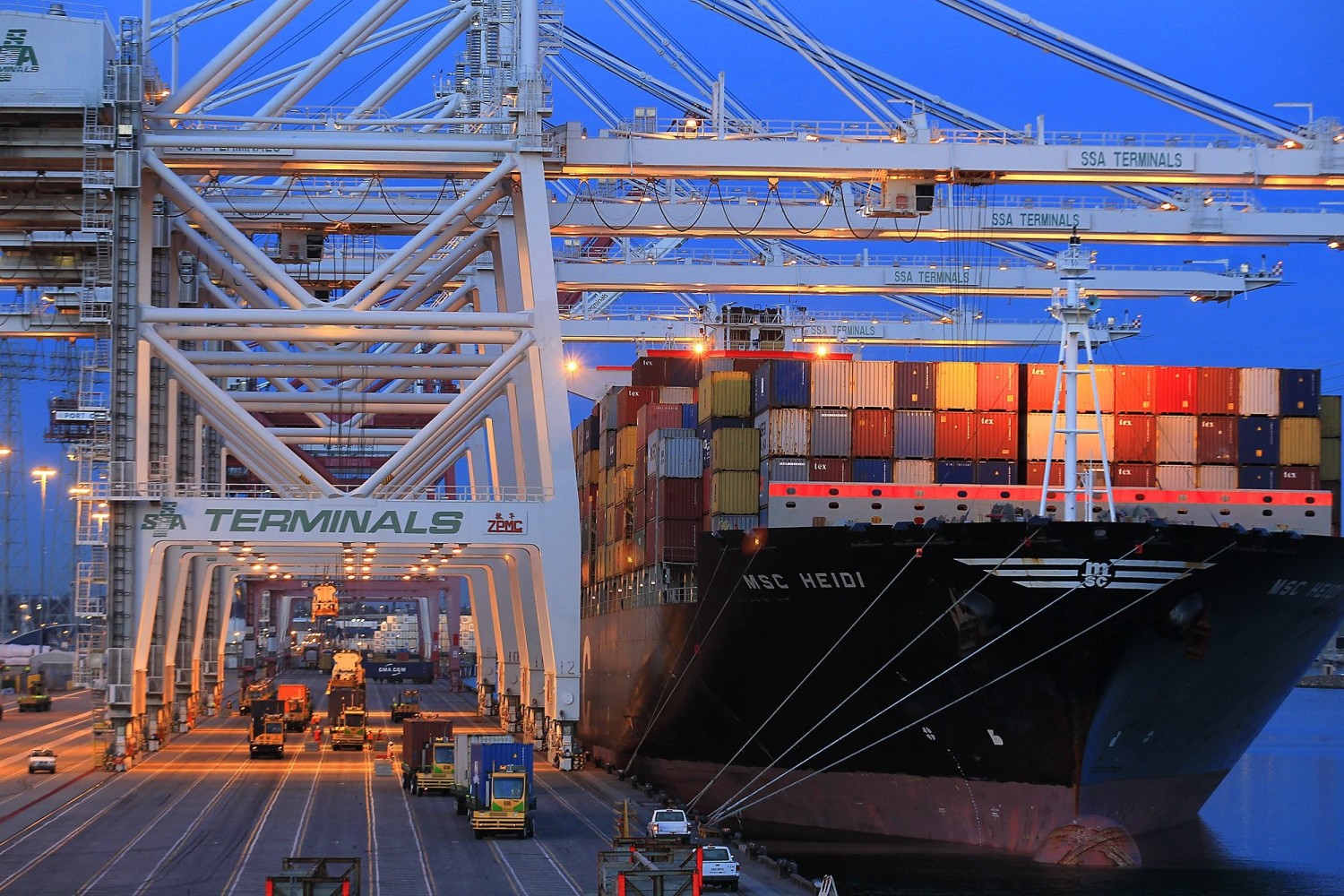 Nearly 700 dockworkers at the twin ports of Los Angeles and Long Beach have contracted COVID-19 and hundreds more are taking virus-related leaves, raising fears of a severe slowdown in the region’s multibillion-dollar logistics economy.

A growing longshore worker infection rate, which parallels the surge of the virus across California, is exacerbating a massive snarl at the ports due to a pandemic-induced surge in imports. Port executives, union leaders and elected officials are mounting an urgent campaign to initiate dockworker vaccinations, fearing that a labor shortage could force terminal shutdowns.

“We’ve got more cargo than we do skilled labor,” said Eugene Seroka, executive director of the Los Angeles port. “We are told 1,800 workers are not going on the job due to COVID right now. That can [include] those who are isolating through contact tracing or awaiting test results. Or maybe [those who] fear … going on the job when a lot of people are sick.”

Workplaces across California, from behemoth warehouses to neighborhood businesses, face soaring coronavirus cases while trying to stay afloat amid seesawing restrictions. As the pandemic has worsened, containing the virus has become more difficult, especially among the L.A. region’s essential workers — who include dockworkers as well as grocery store clerks and nurses.

“My heart goes out to the dockworkers,” L.A. County Health Department director Barbara Ferrer said in a news conference Wednesday. “I’ve heard from many of them that there have been a lot of outbreaks. There is a lot of fear.”

The longshore workers are among many essential employees wanting vaccinations soon, she added. “Hundreds and hundreds of outbreaks have been reported with this latest surge. A lot of community transmission. A lot of workplace transmission…. Right now we’re moving fairly slowly because we just don’t have enough vaccine.”

In the first months of the pandemic, container volume at the Port of Los Angeles plunged nearly 19%, but in the second half of 2020 it rose nearly 50%. “We’re not buying airplane tickets or going to ballgames and movies,” Seroka said. “We’re spending money on retail goods.”

A backlog at the ports is now colliding with the COVID crisis. On Tuesday, 45 vessels were anchored outside the twin ports waiting to unload, part of a months-long bottleneck not seen since a work slowdown six years ago.

“Without immediate action, terminals at the largest port complex in America may face the very real danger of terminal shutdowns,” Rep. Nanette Diaz Barragan (D-San Pedro) and Rep. Alan Lowenthal (D-Long Beach) wrote to California and Los Angeles County health officials on Jan. 15. “This would be disastrous not only for the communities of the South Bay, but also the entire nation which relies upon the vital flow of goods through these ports.”

The warning from the two members of Congress came days after Los Angeles Mayor Eric Garcetti, Long Beach Mayor Robert Garcia and other local officials wrote Gov. Gavin Newsom and Mark Ghaly, California’s health and human services secretary, urging them to speed up the vaccination of Southern California’s 15,000 dockworkers “as soon as possible.”

The ports, they wrote, “are deemed critical infrastructure for national security purposes and medical supplies for the pandemic.” Pandemic equipment imports from Asia, including masks, sanitizer and ventilators for hospitals and other businesses across the nation, flow mostly through the Los Angeles and Long Beach complex.

Seroka said logistics companies, port directors and officials with the International Longshore and Warehouse Union “have worked every angle possible” since December to get help with testing and vaccinating dockworkers. “We haven’t seen a longshore worker get a vaccine yet.”

The state determines vaccine priority, Ferrer said. So far healthcare workers, first responders and residents and staff in skilled nursing facilities are first in line. About 450,000 Los Angeles County healthcare workers still need to be vaccinated and other groups will move up in priority once those workers receive their shots — probably not until early February.

Port executives, union leaders and local elected officials want dockworkers to be eligible for vaccines after medical and other front-line workers.

Last week, Newsom announced vaccinations would open to Californians 65 years and older and this week the city and county of Los Angeles opened portals to offer appointments to residents 65 and older. But the county has yet to receive enough doses to meet the demand.

Newsom’s office did not respond to a request for comment on dockworker vaccinations.

Longshore workers report infections through a portal operated jointly by the ILWU and the Pacific Maritime Assn., which represents terminal employers. According to the ILWU, of the 694 dockworkers who reported COVID-19 infections as of Jan. 17, 12 have died.

In a letter this week to the maritime association, three presidents of Southern California ILWU locals said a single terminal, Fenix Marine Services, out of the twin ports’ 12 terminals has reported an outbreak since the beginning of the pandemic, involving 15 workers.

Under Los Angeles County regulations, if a workplace has three or more confirmed COVID-19 cases in 14 days, the employer must immediately notify the county public health department. “This is not being done by terminal operators at the San Pedro Bay port complex,” the representatives wrote. “The vast majority of terminal operators are failing to report at all.”

James McKenna, president and chief executive of the maritime association, said: “There’s probably a chance that [terminals] have underreported.” After receiving the letter, he added, his group “reiterated with them they need to report on an ongoing basis and a timely basis.”

Asked about enforcement, Ferrer said if workers have concerns about serious violations at their sites, they can report them to the health department anonymously both online and through the department’s call center (888-700-9995). “We investigate all outbreaks,” she said.

The county does not track infections by occupation because the data are limited, she said.

McKenna disputed the number of dockworkers currently idled by the pandemic, saying that the 1,800 cited by the ILWU, port executives and elected officials represents a total for all California ports and includes workers on leave for other illnesses.

According to the longshore union, the positivity rate, which measures the prevalence of infections when compared with the number of tests, is 65% for the Port of Los Angeles and 71% for the Long Beach port. But McKenna said those percentages are unreliable because workers with negative tests may not be entering their information in the portal.

Neither Seroka nor Mario Cordero, executive director of the Port of Long Beach, said they expect any imminent terminal shutdowns. “But I don’t want to wait until it’s too late and then say, ‘Now we’ve got to shut this thing down,’” Seroka said. “We got to keep it rolling.”

Cordero endorsed the need for immediate dockworker vaccinations. “If we don’t do something fast,” he said, “we are jeopardizing the fluidity of the movement of cargo.”