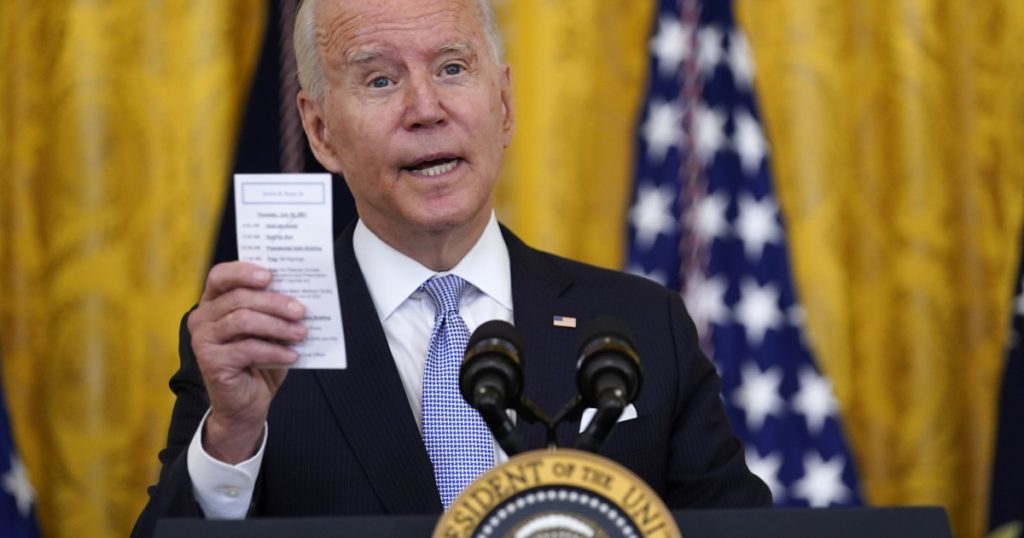 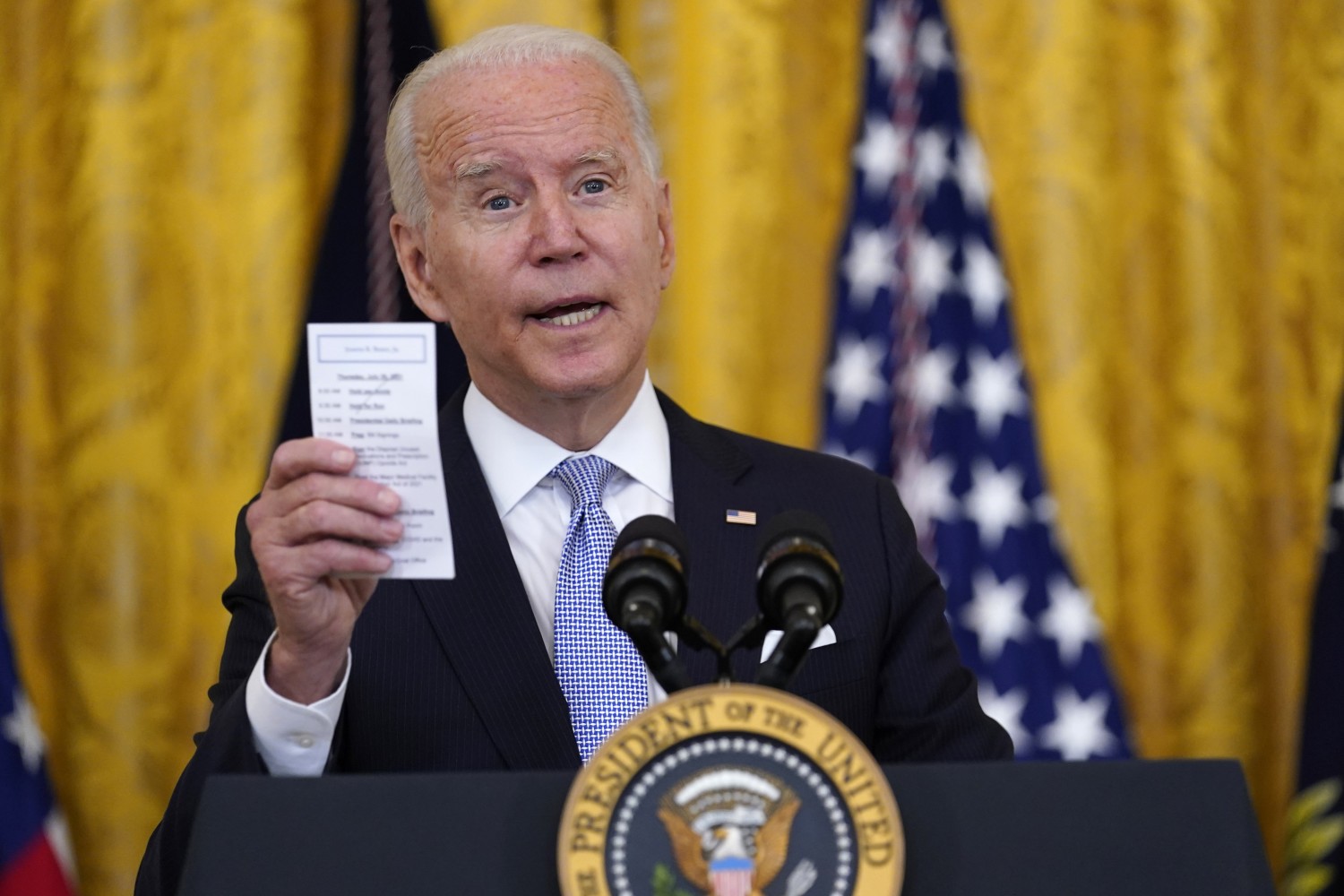 The virulence of the coronavirus Delta variant has ushered in a new phase of the pandemic, prompting tougher vaccine and mask requirements and stoking a volatile mood among Americans that poses peril for both political parties.

Reflecting the urgent need to guard the country against climbing rates of infection, Republicans and Democrats alike have shifted focus in recent weeks. The GOP, mindful of lagging vaccination rates in conservative communities, has begun making more robust appeals for inoculations. Democrats, meanwhile, have embraced mandates as an additional tool to reach the remaining unvaccinated.

In the clearest sign yet of this escalating response, President Biden announced Thursday a new slate of incentives — including $100 for those who get vaccinated — and requirements, ordering federal employees and contractors to get the shot or submit to regular testing, mask-wearing and social distancing.

“I say to all those who are unvaccinated — please, please get vaccinated,” he said in an address from the East Room of the White House. “To the rest of America, this is no time to be despondent or let our guard down. We just need to finish the job with science, with facts, with the truth.”

These moves are set against a backdrop of palpable anger in the country — be it the vaccinated seething at uninoculated holdouts or those chafing at new mask and vaccine impositions from the government.

With the majority of American adults already inoculated, Republicans risk being seen as responsible for the “pandemic of the unvaccinated,” given higher rates of vaccine hesitancy in their ranks. But Democrats, with control of both the White House and Congress, may shoulder the blame for any plunge in the nation’s hopefulness about halting the virus — and possibly hand the GOP a potent campaign issue in next year’s midterm election.

Mandates will be denounced by the right “as a way to fire up and mobilize their base against this big, overreaching federal government,” said Cornell Belcher, a Democratic pollster. “None of this conversation is about what will fire up young voters, minority voters — the college-educated women who were key to the Biden coalition. Where’s their red meat?”

The resurgence of the virus after months of declining infections is good news for nobody, least of all Biden, who made a return to pre-pandemic normalcy a centerpiece of his first months in the White House. A recent ABC News/Ipsos poll found that a majority of Americans are now pessimistic about the direction of the country, a 20-point slide in optimism from less than three months ago.

But the president still gets relatively high marks for his leadership in combating the virus, significantly outpacing voters’ overall assessment of his job performance.

“People have confidence that the Biden administration’s approach is competent,” said Jesse Ferguson, a Democratic strategist, “and that he’s telling the truth.”

That trust is now being tested by the return of mitigation measures. The U.S. Centers for Disease Control and Prevention this week issued new guidance recommending that everyone wear masks indoors in parts of the country with surging transmission rates — just two months after the public health agency said indoor masking was unnecessary for the fully vaccinated.

The reversal was not only a symbolic blow to the nation’s pandemic recovery, but also gave ammunition to administration critics. Public health experts wondered whether the CDC was too hasty in initially lifting the mask guidance. Republicans, meanwhile, jumped on the chance to decry what they say is bureaucratic overreach and raise the specter of harsher measures such as lockdowns.

Rep. Kevin McCarthy of Bakersfield, the House GOP leader, criticized the decision as “conjured up by liberal government officials who want to continue in a perpetual pandemic state.”

Republicans have been particularly apoplectic over new mask requirements set by the Capitol physician for the House of Representatives, with some risking a fine by refusing to wear a face covering. Aiming their ire at House Speaker Nancy Pelosi (D-San Francisco), they questioned why the Senate does not have similar rules. (Nearly all senators have publicly stated they are vaccinated, while almost half of House Republicans have refused to disclose whether they are inoculated, according to CNN.)

Pelosi, asked by reporters to respond to McCarthy’s complaints, appeared to call her fellow Californian “such a moron.”

While the GOP has coalesced around antipathy for mask mandates, the messaging around vaccines has been more muddled. The Delta variant prompted a notable shift in Republicans advocating for the shot, albeit often in cautious terms that emphasize personal choice, while some in the party continue to loudly disparage vaccination with inflammatory rhetoric.

The current wave of infections is hardly just a Republican problem. About 60% of American adults are fully vaccinated, according to the CDC, but surveys say the vast majority of those most eager to get the jab have already done so. Among the remaining unvaccinated population, Black, Latino and younger Americans — all groups that tend to skew Democratic — are overrepresented, according to the Kaiser Family Foundation, a nonprofit that does nonpartisan healthcare research.

Still, looking at vaccination rates across the country, the partisan alignment is stark.

“It is 100% that we know that Republicans are getting vaccinated at a much lower rate than Democrats and independents,” said Ashley Kirzinger, associate director for polling and public opinion research at KFF. “In counties that disproportionately went for [President] Trump, they have a lower vaccine uptake.”

While unvaccinated younger adults and people of color tend to take a “wait and see” approach, Republicans are more firmly set against ever getting the shot, KFF found.

“What’s most important is that we be compassionate, we be understanding, we don’t try to shame or blame or ridicule,” said Rep. Mariannette Miller-Meeks, an Iowa Republican and ophthalmologist who has been administering shots in her district for months. “We know the answer to the pandemic is to get vaccinated.”

Rob Stutzman, a Sacramento-based GOP consultant, said the increased pleas were a sign Republicans “see the real cost. They realize people are dying.”

“Politically, there has to have been a realization … that this is going to have longer-term political consequences to be on the wrong side of history by not being clearly pro-vaccine,” he said. He pointed to Senate Minority Leader Mitch McConnell, a childhood victim of polio and consistent COVID vaccine advocate, who used campaign funds to pay for radio ads to promote the shot in his home state of Kentucky.

Nevertheless, some of the party’s most provocative members, such as Reps. Marjorie Taylor Greene of Georgia and Lauren Boebert of Colorado, are proudly defiant of any mitigation efforts.

“The bestselling item to the Republican base is still the vaccine conspiracies being pushed by Marjorie Taylor Greene,” Ferguson said.

The prospect of new vaccine mandates could open a new front in the COVID culture wars. In addition to imposing new rules on federal employees, Biden on Thursday said the Department of Justice has determined that vaccine rules are legal for local businesses and governments to impose. The Pentagon later said military members will be subject to the same vaccination or testing requirements as federal workers.

At least 19 states, however, all led by Republicans, have some form of ban on requiring proof of vaccination, either for local governments, state agencies or private businesses.

But the trend toward vaccine requirements has accelerated quickly in recent days. The University of California system has said it will mandate the shots for almost everyone on campus in the coming school year. Gov. Gavin Newsom and the city of Los Angeles soon followed suit for state and city workers, requiring vaccines or frequent testing. The trend has carried over to the private sector, with major companies such as Google and Morgan Stanley requiring employees be vaccinated to return to the office.

With no clear signal on how the public will respond to these new rules, politicians would be wise to proceed with caution, said David Winston, a Republican pollster who advises House and Senate leadership.

“Everything is up in the air after people thought they got to a resolution [with the pandemic]. The challenge here is that politicians need to realize this is anything but a political issue to the average person,” he said. “The idea that somehow political points can be put on the board — that would be a serious mistake.”