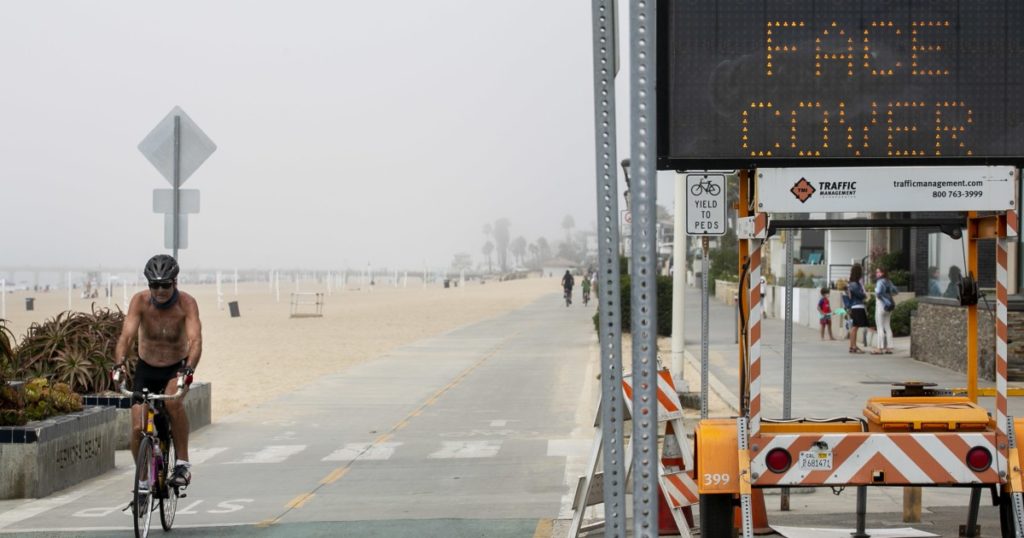 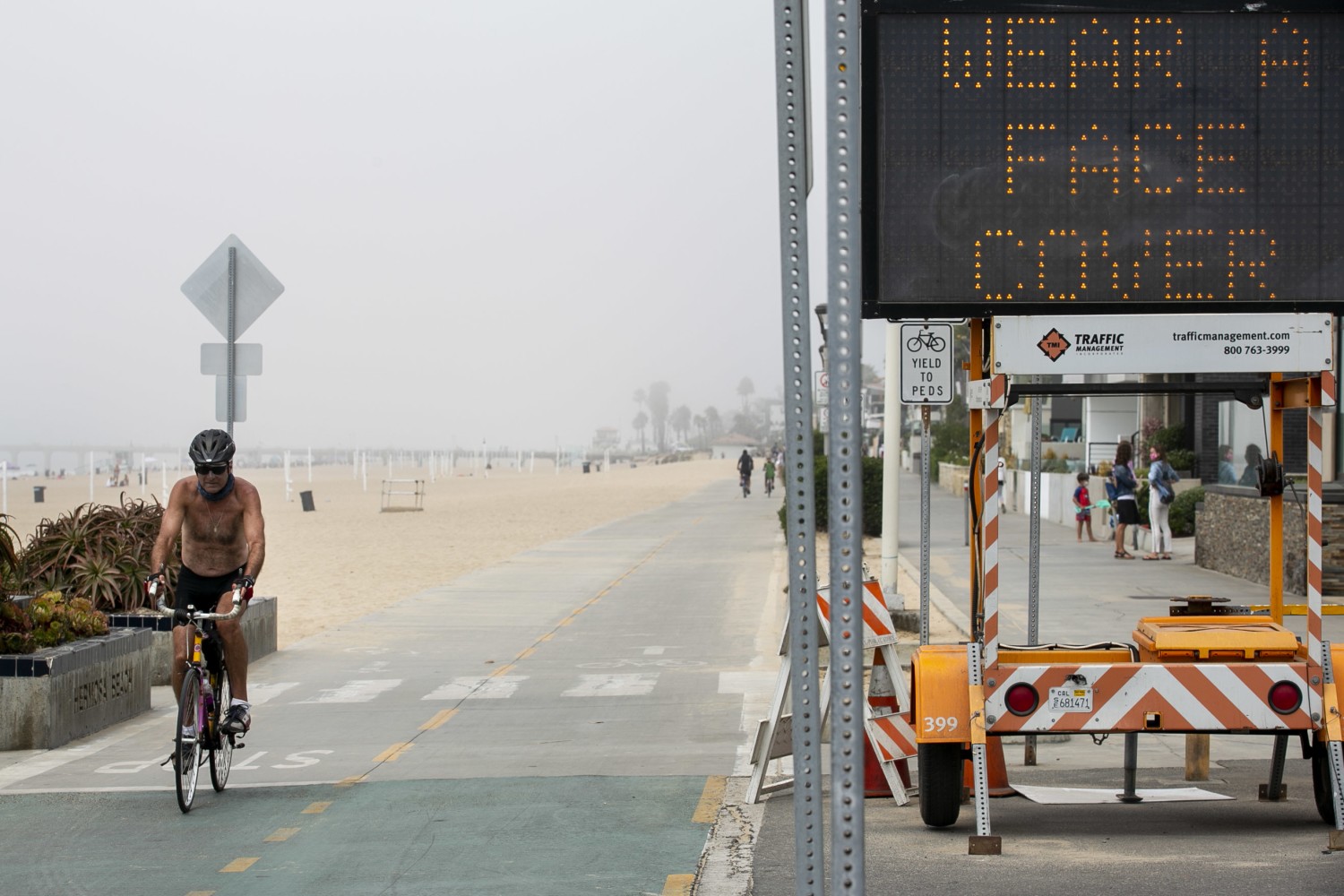 They stroll by, many of them maskless. They pay absolutely no attention to the massive signs that remind people to obey the statewide order to cover their faces. They also pay absolutely no attention to the people hired to enforce the mask order. Instead, these men and women, dressed in bright yellow vests, seem to spend their time standing around, making halfhearted attempts to hand out tickets. Tickets that are often tossed in the nearest trash can.

Nine months into this coronavirus scourge, with cases again surging to terrifying levels, California is losing buy-in even from the pandemic-believing public — and it’s not hard to understand why.

Gone is any semblance of clear communication of a clear plan with clear reasoning about how best to beat back COVID-19. In its place has emerged a haphazard, layered mess of rules and restrictions. And, for the most part, our elected leaders have no one to blame but themselves.

On Thursday, for example, Gov. Gavin Newsom finally pulled his long-threatened “emergency brake,” as the United States broke yet another record for COVID-19 cases, logging more than 3,100 deaths. In California, an average of 67 people have died a day over the last week — a 60% jump from mid-November.

Under a new set of restrictions that will be triggered at the regional level and tied to the state’s rapidly dwindling number of beds in intensive care units, there will be limits on gatherings, shopping and dining. Los Angeles and 10 other counties in Southern California could be forced to switch things up as soon as Friday.

Hair and nail salons will have to close. So will campgrounds. Hotels won’t be allowed to accept tourists. It will be takeout only at restaurants, with employees required to ensure that no one eats or drinks indoors.

Even essential businesses, such as grocery stores and drugstores, will have to limit their capacity to 20%, the same as heretofore nonessential retail businesses.

“The bottom line is, if we don’t act now, our hospital system will be overwhelmed,” Newsom explained Wednesday during his midday news conference. “If we don’t act now, we’ll continue to see our death rate climb, more lives lost.”

“These are transparent triggers,” he added.

Perhaps. But I’d be a lot less triggered if all of this supposed transparency from the governor’s office hadn’t come within 24 hours of Mayor Eric Garcetti announcing a separate set of restrictions for the city of Los Angeles. His attempt at an explanation of the stay-at-home order, which is the same as what Los Angeles County’s implemented Monday, bordered on political malpractice.

Even the text of the order itself was confusing and contradictory. It started off well, with an “all persons living within the City of Los Angeles are hereby ordered to remain in their homes.” But it went on to list 11 pages of exemptions.

Among them, tattoo parlors are still open, along with nail and hair salons, and shopping malls. So are golf courses and tennis courts, and beaches, parks and trails. And producing music is still OK.

However, the city is now banning gatherings of people from multiple households, except for religious services and protests. And using playgrounds is still banned, along with dining outdoors.

Garcetti insisted Wednesday that his “message couldn’t be simpler: It’s time to hunker down. It’s time to cancel everything. And if it isn’t essential, don’t do it.” And yet, even for those of us who wear masks and are doing the right things to slow the pandemic, it’s hard to take that seriously when adults can go play pickleball, but cooped-up toddlers can’t go to a playground.

It’s just one more layer of confusion that has left Californians ending each day not knowing why some things are open, why other things are closed, why some rules are being enforced and why other rules are not.

It’s no wonder then that Beverly Hills and Pasadena have refused to ban outdoor dining, and why the restaurant industry is suing to bring it back across L.A. County. Restaurant owners argue the decision wasn’t sufficiently backed up by data or science.

It’s the same argument that Jessica Millan Patterson, chairwoman of the California Republican Party, was making when she tweeted that “Californians have a right to public health data that is being used to shape their lives.”

In fact, it’s the same argument that many of us are now making as we scratch our heads in confusion and frustration.

Put on the spot by my colleague John Myers, Newsom tried to defend his decision about what should open and what should close as being very much grounded in data and science. And as always, the governor had to remind us that he’s a restaurateur by trade and, as such, completely understands and empathizes with small-business owners.

“We want to mitigate mixing, period, full stop,” he said. “We want to diminish the amount of mixing. And we really need to send that message broadly. And we need to create less opportunities for the kind of contact and extended period, extended time of contact, that occurs in many of these establishments.”

Dr. Mark Ghaly, the state’s Health and Human Services secretary, said the “message is not about how do we mix safely. It’s about how we reduce our mixing altogether, staying at home unless it’s absolutely essential for you to leave your home.”

They are right, of course. We should all be staying home as much as possible, wearing masks, practicing social distancing and washing our hands. This is the only science that truly matters.

But let’s not pretend that what’s happening in California is only about that. It’s also about politics and about Newsom, like many other Californians, prioritizing what he thinks is important, both for public health and for the economy. He is prioritizing what is worth the risk.

A sitdown in the sand in Hermosa Beach. A shopping trip to the mall. A game of pickleball. Or just dinner with a few friends at the French Laundry.