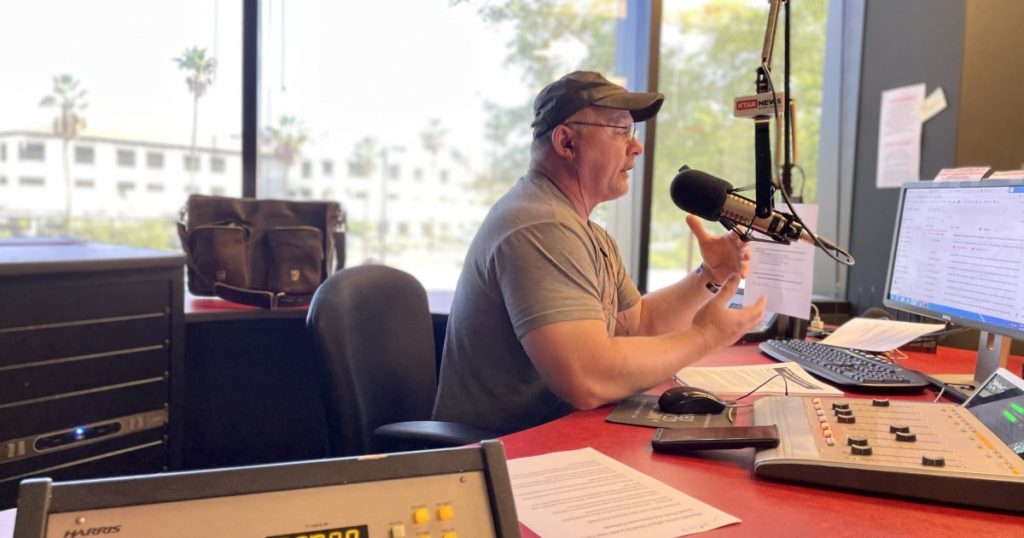 Mike Broomhead talks for a living, but for a moment last week, all he could do was sigh.

With that flash of wordless exasperation behind him, he continued with his work: delivering the latest update on the Maricopa County election recount to listeners of his eponymous morning talk radio show. That day’s news was of a forthcoming conspiracy-theory-riddled documentary on what organizers call an audit — but Broomhead soon turned his attention to the officials overseeing this unfolding spectacle.

This is the type of criticism one might expect from Democrats, who opposed the recount effort from the beginning, or from one of the many election experts who raised alarms at the stark departure from established audit practices, or from a Never-Trump Republican trying to wrest the party from the former president’s grip.

But Broomhead is a two-time Trump voter, a staunch conservative and a onetime supporter of this recount. In recent weeks, he has fashioned himself as a reality check for fellow Republicans.

As the recount of 2.1 million ballots cast seven months ago drags on, Broomhead and others are contemplating just how this saga will end. The recount’s most ardent supporters believe former President Trump will be reinstated in the White House (despite there being no legal mechanism for that to occur). Its fiercest critics predict a damaging precedent that will embolden others to baselessly challenge results of elections they don’t like.

An increasingly vocal share of Arizona Republicans see the recount as an act of self-sabotage, creating an albatross for statewide candidates in the run-up to a pivotal election year. Broomhead is in this camp, with another lingering concern.

“No matter where you stand, the one thing we can all agree on is it has put a great big wedge in this community,” he told listeners earlier in the week. “That to me is the worst part of this. It’s one more reason for us to stand on opposite sides of the streets and complain about each other.”

Seated at his microphone, wearing a Harley-Davidson T-shirt, Broomhead, 54, put in his earbuds, fixed his gaze straight ahead and gesticulated as he talked. The unnatural pantomime translated as natural conversation on-air, as he took his listeners on another recount riff.

“Here’s where we stand. It is June,” he said. “It is June. We have less than a year and a half before another election.”

Proponents of the recount, however, are keeping their eyes firmly fixed on the last election.

Joe Biden won the state with a wafer-thin margin, a result immediately contested by Trump and his allies, although they never presented evidence of ineligible or altered votes. The Board of Supervisors in Maricopa County, comprising mostly Republicans, commissioned two independent audits to quell fears of fraud. Both reports said the vote count was accurate.

But Republicans in the state Senate demanded a broader recount and hired an obscure firm, Cyber Ninjas, which did not have experience with audits of this scale and whose leader had promoted baseless theories of rigged voting machines robbing Trump of votes.

Since the recount began at Phoenix’s aging Veterans Memorial Coliseum, it has been beset with snafus, including ballot security lapses, opaque procedures and technical errors.

Then there are the conspiracy theories — the search for nonexistent watermarks or bamboo fibers in the ballots, sparked by unfounded rumors of ballots flown in from Asia. Organizers granted preferential media access to far-right network OAN, whose personalities are leading grass-roots fundraising drives for the recount that do not disclose donors.

The more the effort veered away from expert-sanctioned best practices and toward groundless speculation, the less Broomhead had faith in its integrity. He tried to imagine if the parties were reversed, if liberal Democrats were pushing an identical process. It’s only fair to admit, he said in an interview, that “Republicans would lose their minds.”

Senate GOP President Karen Fann has said the recount is not intended to overturn the 2020 election results but to simply put to rest any question about the results and perhaps find ways to improve elections. (Broomhead said his initial support for the recount was similarly to restore voters’ faith in the system, and that he never believed the election was stolen from Trump.)

“Whether they are legitimate concerns or not, our voters — our constituents — deserve to have answers,” Fann told The Times in February. Her spokesman did not respond to an interview request last week.

Bill Gates, a Republican Maricopa County supervisor, said the shambolic nature of the proceedings has thoroughly undermined that purported goal.

“I don’t see how anyone in their right mind can argue what’s been going on at the coliseum is instilling any voter confidence,” he said.

The review has no authority to change the 2020 results — and Trump, who frequently praises the recount, would have come up short of the presidency even if he had won Arizona’s 11 electoral votes. Nevertheless, at least some supporters, and the former president himself, see the recount as a step in restoring Trump to power, according to reporting in the New York Times and Washington Post.

Kelly Johnson, a retired lawyer from Huntington Beach, doesn’t just hope that’s the case; he’s certain it will be. Arizona would be the “first domino to fall” in overturning the 2020 results, he said, echoing a prediction promoted by believers of QAnon, an amorphous pro-Trump conspiracy theory.

Johnson, 60, has driven three times to Phoenix to show support. In triple-digit heat, he arrayed his collection of Trump flags on extendable flagpoles, while other supporters relaxed in camping chairs under a canopy, surrounded by handmade pro-recount signs.

Johnson intends to come back midsummer, when the final report is expected to be released, he said, taking a break from the sun in the taco shop across the street.

“I think a lot of us kind of know what the result’s gonna be,” he said, but stated he would believe the Senate Republicans if they say no fraud was found.

Among the recount’s harshest critics, few think that conclusion is likely.

“There is no scenario I can anticipate where Cyber Ninja’s audit report says, ‘There is no fraud in Arizona,’” said Arizona Secretary of State Katie Hobbs, a Democrat. “The way they’ve set it up is primed for cooking the books.”

Broomhead is not shy about his opinions — that’s the whole point of being a talk radio host. But anytime he starts to talk about the recount’s backers, his tread becomes notably lighter.

“I don’t want to make the people that believe this angry,” he explained during a commercial break. “I don’t think they are crazy. I think that these are people that genuinely believe the election was stolen.”

Every time he talks about those involved, be it officials like Fann or Ken Bennett, a former GOP secretary of state who has largely been the recount’s public face, or the volunteer ballot inspectors at the coliseum, he takes pains to praise their intentions. Nevertheless, he catches heat from some listeners who accuse him of being biased against the effort.

Bitter GOP infighting is hardly new in the state; party activists constantly clashed with the late Republican Sen. John McCain for not being sufficiently conservative. To Broomhead, this rift is resurfacing at the worst time, right before the 2022 election, when Arizonans will vote in six statewide races, including for governor and U.S. senator.

“That division is coming to a head right now,” he told his audience, warning that the state party’s all-in support for the audit is leaving moderate Republicans and independents out of the fold. “And if you don’t get everybody on board … we are going to watch the Democrats win the majority of those six important races.”

For state legislators in safe GOP districts, backing the recount is good politics. A poll by HigherGround, an Arizona consulting firm, found that more than three-quarters of Republicans support the audit. Winning over that base of voters ensures a primary victory, and effectively, reelection.

But the same poll found that 55% of Arizonans overall oppose the effort, which means it could drag down statewide and swing district candidates come November 2022.

The recount has already rippled into next year’s governor’s race, which Hobbs jumped into last week. Days earlier, OH Predictive Insights, a Phoenix-based pollster, had put Hobbs at the top of its power rankings of Arizona officials, based in part on her growing name recognition and favorability. Mike Noble, the firm’s director of research, tied her surge to her high-profile challenge to Cyber Ninjas and the state Senate.

“The GOP keeps providing their chin to Hobbs in a proverbial political sense, and she keeps capitalizing each time they stick their chin out, which seems quite often in the audit,” Noble said.

Most Republican hopefuls for statewide office have largely stayed mum on the topic, fearful of alienating either their party’s base or the broader electorate. Also quiet is termed-out GOP Gov. Doug Ducey, even as Trump continues to blast him for certifying the election last fall.

“The fact this is not being called out by other Republican elected officials is mind-numbing to me,” said Gates, the Maricopa County supervisor.

As the recount drags on, some Arizona Republicans are losing patience. The Maricopa County Board, which had long opposed the recount, has ratcheted up its pushback with uncommon vehemence. Former GOP Gov. Jan Brewer said auditors should “call it quits,” speaking in an interview on “The Gaydos and Chad Show,” Broomhead’s afternoon counterparts on KTAR 92.3 FM. Two GOP state senators have signaled varying degrees of discomfort with the proceedings.

In the best-case scenario, said Rebecca Rios, the state Senate Democratic leader, those legislators would “come to their senses and work with Democrats to shut the audit down.”

All indications, though, are that this drama is set to dominate Arizona’s political landscape for some time. There are reports the state Senate is considering yet another digital recount. The Maricopa County Board is primed to sue the state Senate, while American Oversight, a nonpartisan anticorruption nonprofit, has gone to court seeking public records regarding the recount.

And the question of the total price tag remains unknown, particularly after Hobbs told the county it should obtain new voting machines because those turned over to the state Senate may have been compromised.

This is what Broomhead fears — months more of preposterous headlines. It may make for great radio, but it might not be great for his party, or his state. And so he keeps talking about the recount, bemoaning the debacle it has become and hoping its officials will listen.