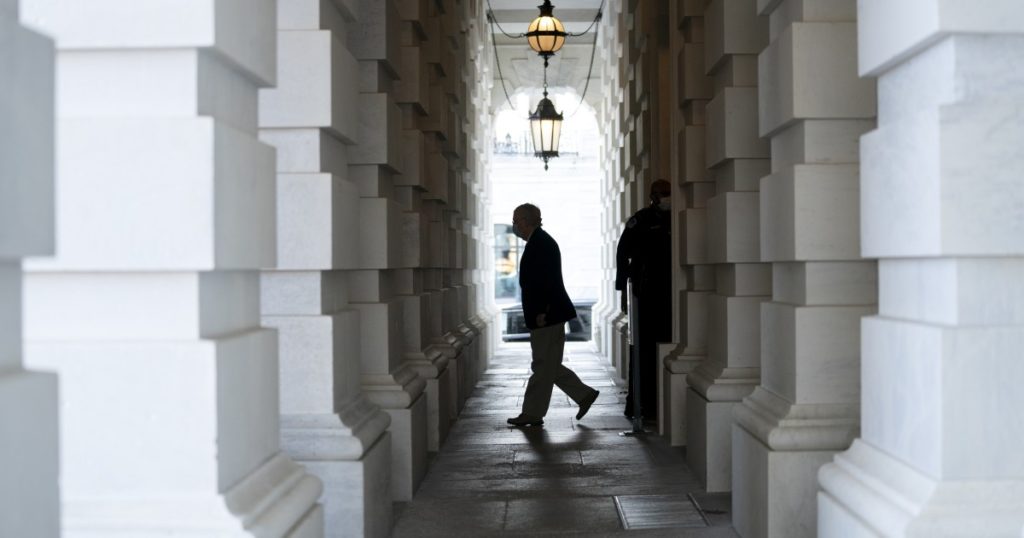 After months of impasse, House and Senate leaders were on the brink Wednesday of announcing an economic aid package of about $900 billion, which is expected to add $300 a week to state compensation for the unemployed and provide a one-time direct payment of at least $600 for most Americans.

The compromise is also expected to include another round of Paycheck Protection Program loans for small businesses as well as money for vaccine distribution, food assistance, rent payments, child care and schools.

Senate Majority Leader Mitch McConnell (R-Ky.) said on the Senate floor early Wednesday that the leaders had made “major headway” toward getting a “targeted relief package” and have committed to not leaving Washington until a deal is reached.

Senate Minority Leader Charles E. Schumer (D-N.Y.) seemed to agree, saying, “As we race the clock to reach a final accord before the end of the year, we are close to an agreement. It’s not a done deal yet. But we are very close.”

The news was welcomed Wednesday at the Federal Reserve, where Chairman Jerome H. Powell has urged passage of additional federal relief.

“The case for fiscal policy right now is very, very strong,” he told reporters. “With the expiration of unemployment benefits, the expiration of eviction moratoriums, with the virus spreading the way it is, there’s a need for households and businesses to have fiscal support.”

“Getting through the next four, five, six months — that is key,” Powell added. “Clearly there’s going to be need for help there, and my sense and hope is that we’ll be getting that.”

Many of the deal’s details have not been made public, and some are not yet settled. For example, the direct payment will go to Americans with incomes below a certain threshold, but that amount isn’t yet known. And the deal is expected to include rent assistance, but few details of who might be eligible have been released.

“We’ve made progress. Now it’s just the fine details that we’ve got to get done. But those are the most important ones,” House Minority Leader Kevin McCarthy (R-Bakersfield) told reporters Wednesday afternoon.

The aid is expected to be tied to a $1.4-trillion package funding the operations of federal agencies through this fiscal year ending Sept. 30; Congress must pass that measure by Friday to keep the government open. If congressional leaders can negotiate the final details and get their members on board with the deal, a vote on the combined spending and aid package could be held as soon as Thursday.

The new relief package is based largely on a $748-billion relief bill that a bipartisan group of Senate and House moderates unveiled Monday as a compromise, with the addition of the new round of stimulus checks.

Negotiations had stalled for months over the total cost of the aid package, whether to provide money to state and local governments struggling with a drop in tax revenue because of the pandemic, and whether to shield businesses and organizations from liability if customers or employees contract the coronavirus. The state and local aid was a Democratic priority, the liability shield a Republican priority.

Little time remains before many of the remaining benefits under last spring’s relief measure, known as the CARES Act, expire at the end of the year. Without further aid, millions of Americans would lose the unemployment payments that have been a lifeline as the pandemic has worsened, reducing business activity. Evictions would be allowed to resume on properties with federally backed mortgages, food aid would end, and money to help states and cities weather the pandemic would have to be returned.

Legislative leaders agreed in a closed-door meeting late Tuesday that the provisions on state and local aid and business liability should be set aside for the next debate over aid that is expected in the new year.

President-elect Joe Biden has urged lawmakers to pass what they can now, in hopes of another package in early spring once he’s in office. President Trump has largely been absent from the months of talks for relief, except for an occasional tweet urging Congress to spend what it takes — advice Republicans have not been inclined to follow.

Without a deal, up to 12 million Americans could lose unemployment benefits the day after Christmas. Pressure on Congress to act has built for weeks as jobless Californians like Ed Saleh, 62, of Anaheim have depleted their bank accounts.

“The lockdowns have been so long, we just need some way to just get by,” said Saleh, who has been furloughed since the bowling alley where he is a night manager closed in March.

Without unemployment payments, Saleh said he has no idea how he would pay rent or buy food. He has no family to rely on, and with a partial disability, he has not been able to find work during a pandemic-induced slowdown.

Rep. Mark DeSaulnier (D-Concord) said he is hearing from a dozen constituents a day who are panicked about what they’d do without more help. People have used up savings and run out of options, he said.

“Things are starting to hit the proverbial fan,” DeSaulnier said. “We’re really tempting fate. This is a fragile economy.”

Maria Cortez, 54, of Santa Monica said she and her three adult children have been laid off, and she didn’t know how they would afford housing if unemployment payments ended.