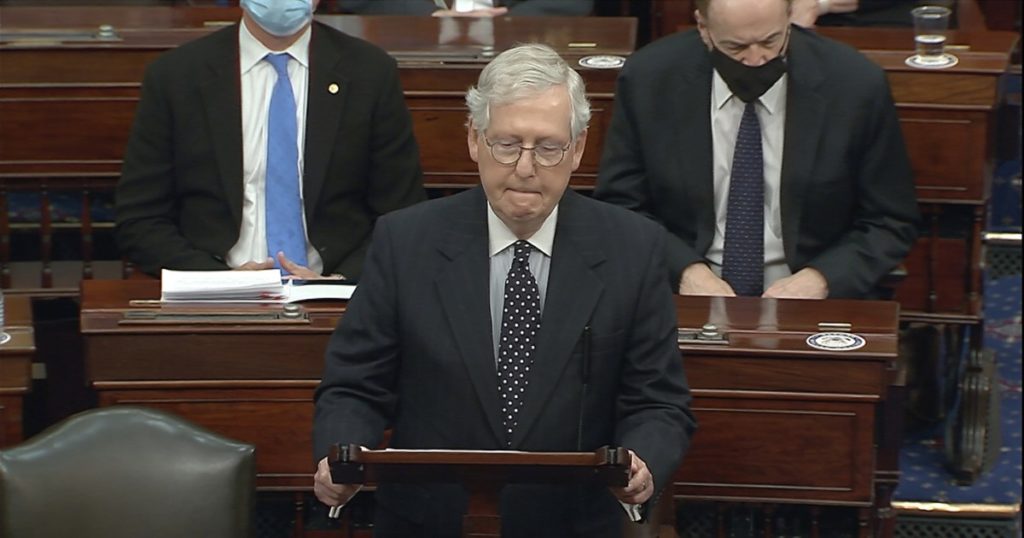 In the first days after a mob invaded the Capitol to try to halt President Biden’s election, a welcome wave of bipartisan anger rippled through Washington.

Sen. Mitch McConnell of Kentucky, the Republican leader in the Senate, condemned the riot as an assault on democracy, accused former President Trump of provoking the mob and even said he would consider voting to convict Trump in an impeachment trial.

But if the Kentucky senator seemed for a moment to be embracing Biden’s call for unity, it didn’t stick.

In Week One of the Biden presidency, McConnell opted for a more familiar pursuit: partisan combat. As the price of a routine agreement to organize the Senate, he demanded that Democratic leader Charles E. Schumer renounce a major goal of his party’s progressive wing, the end of the filibuster rule.

The proposal was a nonstarter, and Schumer quickly rejected it.

But that’s what makes the odd little clash so intriguing. McConnell knew his demand was almost surely doomed. So what was he up to?

He was sending a message — to Biden, to the Democrats, and to his own party — that as Senate minority leader, he will be the same tough-as-nails obstructionist that he was a decade ago when Barack Obama was president.

He was establishing his ground rules for life in a 50-50 Senate: Never mind Inauguration Day rhetoric about unity or gauzy stories about his warm relationship with Biden. In McConnell’s view, the duty of the opposition is to oppose — and to do everything it can to win the majority back.

We shouldn’t be surprised.

In 2009, McConnell faced a challenge similar to his situation today: a newly elected Democratic president who talked optimistically about unity and bipartisanship. Back then, in a less polarized nation, Obama was more popular than Biden is now; early in his first term, his popularity neared 70%.

McConnell was audacious but candid: He declared himself an opponent of bipartisanship.

“When you hang the ‘bipartisan’ tag on something, the perception is that differences have been worked out and there’s a broad agreement,” he explained in a 2011 interview with the Atlantic. “The only way the American people would know that a great debate was going on was if the measures were not bipartisan.”

So he began whipping other Republicans to stand together and resist, to deprive the new administration of any support from the opposition.

Those memories — and his plans for the next couple of years — are undoubtedly what drove McConnell’s attempt this week to win a formal pledge from Schumer not to abolish the filibuster rule, under which most legislation requires a 60-vote supermajority to advance.

As McConnell knows well, the filibuster divides Democrats. A growing progressive majority wants to get rid of it, because it stands in the way of ambitious laws they want to pass, like the “Medicare for all” proposal of Sen. Bernie Sanders (I-Vt.). Traditionalists like Sen. Dianne Feinstein (D-Calif.) want to keep the rule, because they believe it forces the Senate to adopt moderate, broadly acceptable legislation.

So, one of McConnell’s goals may have simply been to drive a wedge between progressive and moderate Democrats — and to force Schumer into an early, preemptive concession.

But McConnell had another, more important reason for trying — despite the odds — to keep the filibuster rule: It’s his favorite legislative weapon.

It’s the main procedural tool he plans to use to stop Biden’s ambitious legislative agenda.

As Senate minority leader during the first six years of the Obama administration, he wielded the rule often to bring that Democratic president’s program to a virtual standstill.

Obama managed to pass a massive economic stimulus bill in 2009 and a landmark healthcare bill in 2010 — but after the 2010 election, when the Democrats’ Senate majority shrank to 53 , McConnell was able to block most of the Democrats’ major legislation.

Moderate voters, impatient with gridlock, blamed Obama and deserted the Democrats. Republicans regained a majority in the House of Representatives in 2010 and the Senate in 2014.

That history is what McConnell wants to repeat in the Biden era: politics as guerrilla warfare, battling the majority to a standstill.

Obstruction is where McConnell excels. He’s never been much of a visionary: After 48 years in the Senate, there are no landmark laws that bear his name. But give him a monkey wrench, and he knows precisely where to throw it to jam up the works.

That will be a problem for Biden, whose agenda includes ambitious proposals for immigration reform, climate change programs and a $15 minimum wage, among many other goals.

White House aides say the new president learned a lesson from Obama’s experience in 2009 and his own experience in 2012, when many Democrats believed McConnell bested him in negotiations over a fiscal cliff bill.

They’ve said Biden plans to seek bipartisan buy-in for his initial legislation on the COVID pandemic and economic relief — but if Republicans stand in the way, he’ll resort to reconciliation, the Senate procedure that allows budget measures to pass with a simple majority.

Biden, a Senate traditionalist, says he doesn’t seek repeal of the filibuster rule. Some of his allies think he may have occasion to reconsider that stance in the years ahead.

Either way, they should harbor no doubt about where McConnell will stand. He will plant himself squarely in their way.