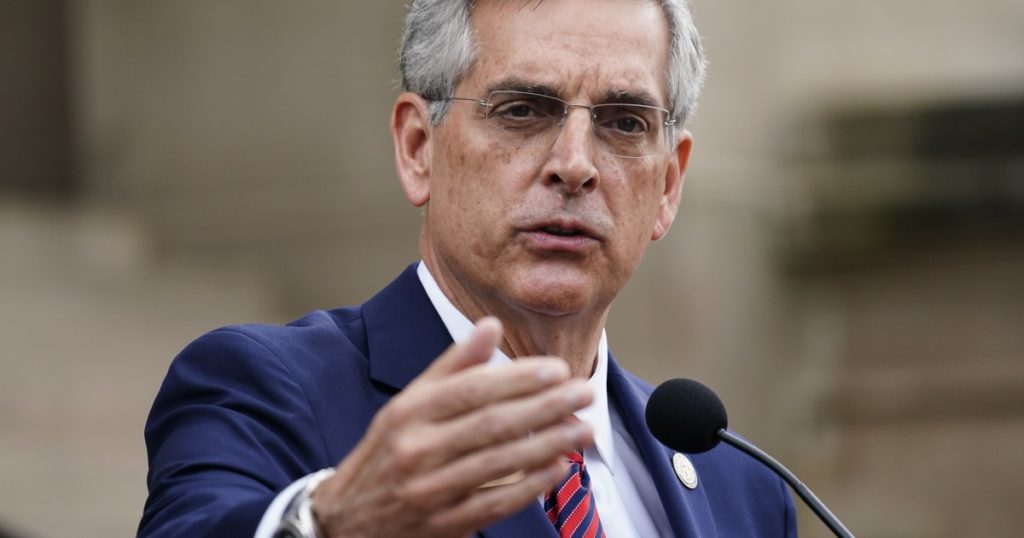 Donald Trump’s campaign to steal the 2020 election after clearly losing at the ballot box failed for a couple of reasons.

His baseless claims of fraud were thrown out by virtually every court that heard them. Perhaps most important, many GOP officials refused to play along — including Georgia Secretary of State Brad Raffensperger, who declined to “find” the 11,780 more votes Trump needed, and then-Vice President Mike Pence, who turned down a demand from the president that he block Joe Biden’s victory from being certified by Congress.

But the former president and his allies aren’t done.

Pro-Trump forces in dozens of states are now working to change election laws to make it harder for Democrats to win — and easier for Republicans to challenge the results if their candidate loses. If they’re successful, the chaotic aftermath of the 2020 election may only have been a rehearsal for a second round in 2024.

“What was really scary about 2020 was how close we came to a meltdown,” Edward B. Foley, an election law expert at Ohio State University, told me. “It’s not too early to worry about Jan. 6, 2025.”

One part of the GOP election-law campaign has gotten plenty of publicity: new laws in Georgia and elsewhere to make voting more difficult, including a statute that makes it a criminal offense to give people water while they wait to vote.

But other, less visible actions may be even more important. In at least 36 states, Republican legislators have proposed laws to weaken the autonomy of local election officials and put more power over vote-counting in the hands of legislators.

That’s a recipe for political meddling in election results. “It’s the opposite of what good election administration should be,” Jocelyn Benson, Michigan’s Democratic secretary of state, said recently.

In Georgia, for example, the same law that criminalized giving water to thirsty voters also gave the Legislature the right to appoint the chair of the state election board — and gave the board the right to take over a county’s election management.

“The most destabilizing thing is the effort to change who’s in charge of the vote-counting process,” Foley said. “That’s really dangerous.”

And the most important battle over the ground rules for the 2024 presidential election will happen in plain sight with the 2022 elections of governors, secretaries of state and state legislators, plus members of the U.S. House of Representatives.

To understand why those jobs matter for the 2024 presidential election requires a brief refresher on the creaky machinery of the electoral college.

The Constitution gives every state legislature the power to regulate the elections that produce electoral votes. In advance of election day, the legislators write the rules. Then each state’s secretary of state administers the election and oversees the vote count.

Once the votes are tallied, it’s up to the governor to certify the electoral college result and send it Congress. Congress counts the electoral votes and confirms the result.

In most election years, that process is uncontroversial. But when a losing candidate contests the election, it can turn into a thicket of ill-defined powers.

Last year, for example, Trump asked several GOP governors to refuse to certify their states’ results — under the legal theory that if electoral votes for Biden weren’t certified, they couldn’t be counted.

When Georgia Gov. Brian Kemp refused, Trump called him “worse than a Democrat” and threatened him with a primary challenge.

Next step: If no candidate has a majority of certified electoral votes, the House of Representatives decides the winner — under a peculiar system in which each state’s delegation gets one vote.

If Trump had succeeded in throwing the 2020 election to the House, he could have won a second term, because 27 of the 50 House delegations have Republican majorities.

“To control the outcome [in a given state], one party has to be in control of both the legislature and the governorship,” Foley told me. “That makes the gubernatorial elections in 2022 critical in swing states like Wisconsin, Pennsylvania and Michigan.”

The otherwise obscure races for secretary of state will matter as well. In Georgia, where Raffensperger refused Trump’s request to “find” extra votes, the former president has already endorsed a challenger, Rep. Jody Hice, who is casting himself as a Trump loyalist.

“They are trying to lay the groundwork [for 2024] to make sure local officials will jump if Trump tells them to jump,” Foley said. “They didn’t jump last time, but they might the next time.”

Do Republicans really want to win a presidential election this way? Probably not; any political party would rather have a clear and convincing majority, without any need to resort to chicanery.

But Trump clearly has no such scruples — and his supporters like House GOP leader Kevin McCarthy of Bakersfield, who hopes to be speaker of the House by 2024, have fallen in line. McCarthy signed on to a pro-Trump lawsuit that asked the Supreme Court to invalidate Biden’s electoral votes in four states, and was one of 126 GOP House members who voted against accepting the electoral votes from Arizona and Pennsylvania, which Biden won.

When voters choose governors, legislators and secretaries of state next year, they need to realize that there is far more at stake than what happens within the boundary of state lines. The outcome of the 2024 presidential election may be on the ballot, too.