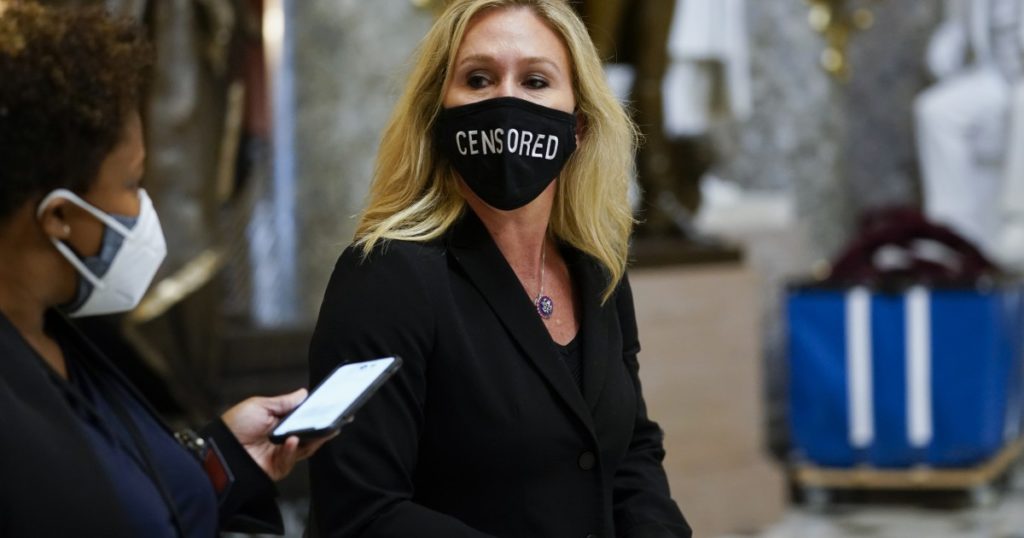 Last week, two of the Trumpiest Republicans in the House of Representatives, Marjorie Taylor Greene of Georgia and Paul Gosar of Arizona, said they were forming a new “America First Caucus” to champion former President Trump’s policies during his exile at Mar-a-Lago.

Among the principles in its draft manifesto was this passage, under the heading of “Immigration”: “America is a nation with a border, and a culture, strengthened by a common respect for uniquely Anglo-Saxon political traditions.”

It said legal immigration should be curtailed because too many recent immigrants have “refused to abandon their old loyalties.”

House Republican leader Kevin McCarthy of Bakersfield quickly disavowed the move. “The Republican Party is the party of Lincoln,” he tweeted, “not nativist dog whistles.” Greene and Gosar abruptly announced that they didn’t plan to form a caucus after all.

But don’t expect that to be the last we’ll hear of the sentiments in their abandoned manifesto.

Their views date to an ugly strain in American history, the 19th century nativism that held that the “Anglo-Saxon race,” meaning white Protestants from northern Europe, was superior to all other civilizations.

No wonder McCarthy felt compelled to denounce it; the GOP is small enough without expelling Irish Americans like him.

Greene and Gosar were right, however, to think they were carrying on the tradition of Trump, who stoked white fear, defended Confederate monuments and called Black Lives Matter “a symbol of hate.”

And it’s not a long way from there to Tucker Carlson, the ratings king of Fox News, who has been telling viewers that Democrats want to increase legal immigration to “replace” white voters with “new people, more obedient voters from the Third World.”

That appeal to racism was so blatant that the Anti-Defamation League denounced it as “white supremacist” and demanded that Carlson resign. Fox News, which is owned by an immigrant from Australia, said its executives didn’t see anything racist in the evidence-free conspiracy their star was peddling.

In fact, Carlson’s “replacement theory” is more dangerous than Greene and Gosar’s loopy Anglo-Saxon manifesto. Night after night, he tells Fox News viewers that immigrants are participants in a deliberate plot to end white preeminence in American life. The accused perpetrators of several mass murders, including the 2018 attack on a synagogue in Pittsburgh that killed 11 and the 2019 attack on an El Paso Walmart that killed 23, are believed to have posted anti-immigration screeds before the shootings.

And the message is falling on other receptive ears. A survey last year by the nonpartisan Public Religion Research Institute found that 71% of Republicans — and 82% of those who said they trust Fox News — believe new immigrants are “a threat to traditional American customs and values.” Among all Americans, only 39% share that view.

Those attitudes put McCarthy and other Republican leaders in something of a dilemma. Most of their loyal voters — the “base” the GOP relies on every election day — believe that immigrants are their enemy and that white people are victims.

That’s presumably why McCarthy’s rebuke to the Anglo-Saxon screed was milder than it might have been. He didn’t call for the caucus’ organizers to be expelled from the GOP conference, as dissident Rep. Adam Kinzinger (R-Ill.) did. He didn’t call nativism “evil” and “malicious hate,” as Rep. Liz Cheney (R-Wyo.) did. All he did was assert that his party shouldn’t indulge in “nativist dog whistles.”

I asked the GOP leader’s spokesman if McCarthy would expand on his comment. He did not reply.

So I can only describe what I see: McCarthy doesn’t want his party to look racist — but he feels a need to make it welcoming for voters and members of Congress who hold racist views. Whether or not that makes the GOP a racist institution, it has chosen to be racist-friendly. Republican politics, including the noisy version that appears on Fox News, looks like a series of attempts to normalize white nationalism.

So far, it’s not working very well. One reason Trump lost his campaign for reelection was that his nativist rhetoric drove college-educated white voters away. It may also be one of the reasons the percentage of voters who consider themselves Republicans has sunk to 25% in the Gallup Poll, a nine-year low.

As the non-Anglo-Saxon part of the electorate grows, staying cozy with white nationalism will be a losing strategy for the GOP.