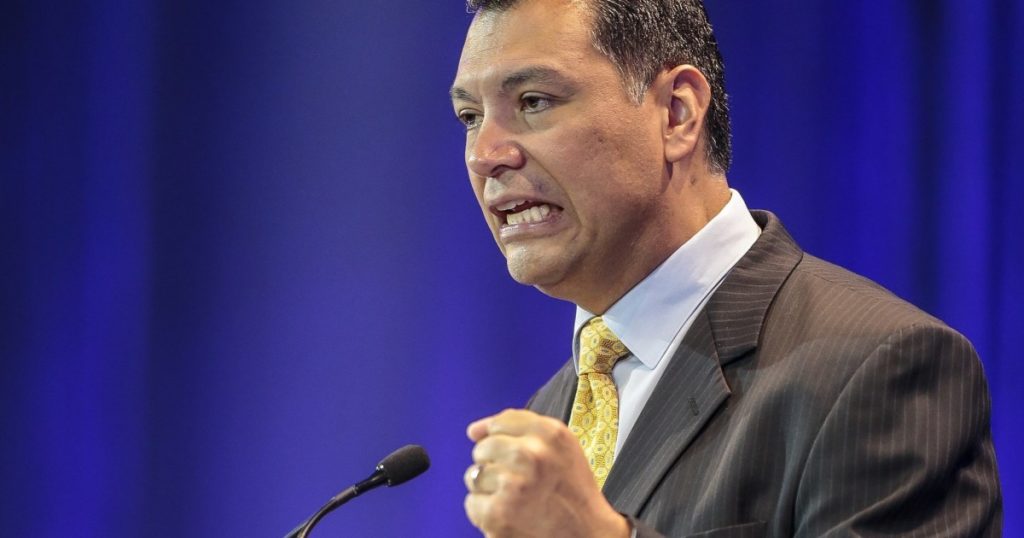 In November, I wrote that he should pick a Latino from the San Fernando Valley to replace Kamala Harris as a California U.S. senator.

The governor got the location and ethnicity right, but not my guy: I suggested Hollywood macho man Danny Trejo, aka “Machete,” but Newsom went with Secretary of State Alex Padilla.

The Pacoima native is the first Latino to ever represent California as a U.S. senator. And it’s truly a historic, wonderful moment, because Padilla exemplifies everything good that this state needs right now.

He’s the first-ever California U.S. senator born in Los Angeles. The son of Mexican immigrants. Grew up working-class in the suburbs. Graduated from MIT, which already makes him smarter than nearly all of his new colleagues combined.

The 47-year-old is from the generation of Californians who became radicalized as teens and young adults due to Proposition 187, the 1994 anti-immigrant ballot initiative that nearly two-thirds of voters passed but which instead turned California into a national Democratic hammer.

He has climbed a political ladder — Los Angeles city councilmember, state senator, secretary of state — that will serve him well in D.C. as a senator who knows the needs of local and state governments.

Latinos are a plurality of California’s population — and we just got a U.S. senator?

We’re the ethnic group who helped the Democrats take control of the Golden State once and for all. And the only way Latinos could get one of our own to become U.S. senator is through an appointment?

Padilla’s move doesn’t prove that Latinos have finally fulfilled our political potential. It’s a reminder that we have so much further to go.

With Padilla now our senator, and former California Atty. Gen. Xavier Becerra in line to become President-elect Joe Biden’s secretary for the Department of Health and Human Services, that means Insurance Commissioner Ricardo Lara is the sole Latino in California’s executive branch — and that position is about as potent as an iPhone after a swim.

Padilla, while well-liked in Democratic circles, must run for election in two years. Already, Adam Schiff and Katie Porter — the apples in the eyes of progressives who find Padilla not radical enough despite his successful fights against Donald Trump over allegations of voter fraud — have amassed war chests for likely runs against their fellow Democrat.

I still don’t see a Latino that can win in a gubernatorial race after Newsom leaves office. A Latino is unlikely to take Dianne Feinstein’s seat when she finally retires.

And the California Republican Party — headed by a Latina, no less — is ready to channel widespread anger toward Newsom and a better-than-expected turnout among Latinos for Donald Trump to wrangle up more of us into the GOP camp than ever before.

Over the 20 years of my journalism career, I’ve heard again and again that Latinos have finally flexed our proverbial political muscles. We’ve done a great job of finally representing our communities on the local and state legislative level through strategizing and willpower. But when it comes to following through on our potential statewide power, we’re 90-pound weaklings.

A lot of the fault lies in the missteps of some of the very people we’ve pushed as our Brown Moses to lead us out of the political wilderness.

Padilla’s announcement takes me back to 2005, when he sat on the Los Angeles City Council. That year, the future seemed easy for a Latino reconquista of California’s corridors of power. Antonio Villaraigosa was Los Angeles mayor, Jose Huizar headed the L.A. Unified School District. Rocky Delgadillo was city attorney, and Gloria Molina chaired the Los Angeles County Board of Supervisors.

In Sacramento, Cruz Bustamante was lieutenant governor, and Fabian Nuñez was speaker of the house. Throw former L.A. County Sheriff Lee Baca into this Mexican mix, and Latinos had a farm system of talent ready for the big leagues to rival the Dodgers under Branch Rickey.

Today, only Padilla — the quiet kid among that group — remains in political office. With the exception of Molina, everyone else flamed out or got caught up in scandals that set back the cause of Latino politicians for a good generation.

We’ve been waiting for this moment — and we’re still not there just yet. So I hope Padilla celebrates tonight, then takes a second to ponder the profundity of what he now means.

He reached the top of a ladder that shouldn’t have been this high. Now, with him all the way up there, may he lift up more of us — by throwing away the ladder, and opening the door on the first floor.