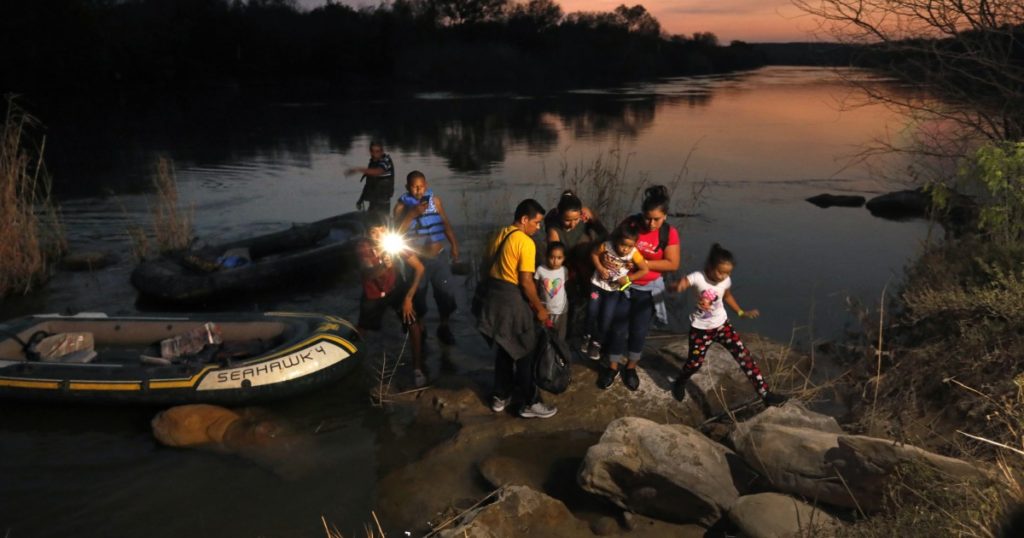 A toddler’s muddy shoe.
An empty wallet.
A pink hairbrush.
A line of Scripture.

These and other possessions litter the dirt path leading uphill from the Rio Grande. Bright spots quickly coated with dust, they are what was carried and what was dropped by mothers, fathers and children, like the boy whose size 6 Batman underwear lay in a clearing beyond a thicket.

Birth certificates. Scribbled phone numbers. Prized belongings hauled for weeks over hundreds of miles. These, too, are scattered along the trail by migrants, their footsteps quiet in the night after they’ve crossed the river. But what shine most are the plastic wristbands — a rainbow of yellow, gray, red and blue spreading through the brush — some cinched to fit the smallest arms.

Many are printed with a single word: entregas. Deliveries.

Mexican traffickers have been ferrying families and unaccompanied children, many from Central America, across the river on rafts and into Texas’ Rio Grande Valley this month. They affix the wristbands to migrants as proof of payment. The wristbands are migrants’ claves — their keys to safe passage — and those without them say they’ve been kidnapped by smugglers and held until relatives or friends agreed to pay their fee, at least $6,000.

The wristbands dangle from the brush like strange ornaments. Some who wore them would be sent back to Mexico. Others would die trying to find home in a new land.

State troopers who patrol the area with night vision goggles say a smuggler recently dropped a 2-year-old in the river to divert the troopers from seizing a raft. Earlier this month, a pregnant woman went into labor on the riverbank and lost her baby. More recently, about 200 miles upriver from Roma, a 9-year-old girl died while crossing the river with her Guatemalan mother and young brother.

When migrants near shore, troopers yank at their inflatable rafts, puncturing some and setting them aside like trophies. The migrants shed what they own as they hustle up the path from the river toward U.S. Customs and Border Protection agents in a hilltop parking lot. From there, the migrants are taken to an overcrowded holding area, where more than 4,200 people are squeezed into a space designed for 250. Many are crossing this month for the first time; they aren’t worried about what they might need if they’re sent back to Mexico.

“I’m going to help him until the day I die.”

Martha Ramirez Amaya has come north from Honduras after losing her home in Hurricane Eta. Smugglers force her and her 5-year-old son, Elvin, out of the raft. She tumbles into the shallows, soaking her black coat and jeans. When she makes it to shore, Ramirez, 20, feels for the gold medallion she wears around her neck for protection. It’s there. She hurries toward the Border Patrol flashlights on the hill.

Ramirez and others follow the trail as it splits and winds through the brush, their possessions often falling onto land owned by Jorge Barrera’s family. Barrera, who fishes from the riverbank at dusk, has called Border Patrol to complain about bags of Cheetos, powdered baby formula and other trash. But it continues to accumulate as migrants push on despite the pandemic, smugglers’ threats and the needle-sharp crown of thorn bushes.

The migrants begin to shed all but their most prized possessions once they reach shore. Jonatan Cruz, 31, and his Guatemalan family drop their expired Mexican residency permits. Others have left sweatshirts, size 23 toddler shoes, Avon strawberry lip balm, disposable diapers, masks, Garanimals khakis (size 2T), a red Hello Kitty purse and a Texas flag backpack. When their wet jackets snag on trees, they slip them off and leave them suspended in the dark, like ghosts.

They stumble forward without flashlights into the scrubby oak and sage. They clutch what they need most: valid identification and scraps of paper bearing the phone numbers of friends and family in the U.S. Youths traveling alone keep contact numbers tucked in their pockets, if not written on their chests by their parents before leaving home.

Bessy Yamileth Gómez Flores carries a notebook scribbled with Matthew 21:22: “If you believe, you will receive whatever you ask for in prayer.” Another woman drops a pink pleather purse stuffed with a wad of wilted Honduran bills.

Others carry their hopes. Salvadoran Fatima Pineda Vasquez, 16, wants to be an architect. She has come with her 12-year-old nephew, who wants to be a surgeon. They plan to join his mother, Fatima’s older sister, in Missouri.

Many bring pruebas, or proof, of the threats and violence they’re fleeing in Central America. They hope to present them as evidence to request asylum. They also carry Central American birth certificates, precious to migrant parents anxious about being separated from their children by U.S. authorities, and to youths traveling without adults. Those who can show they’re under 18 are released to friends and family in the U.S. and can pursue their immigration claims. Those who can’t prove their age face potential expulsion to Mexico.

As migrants pick their way uphill, vital paperwork is lost, including two birth certificates tucked inside a black diaper bag discarded along the trail. They belong to Honduran migrant Maryi Jennifer Amaya Mejia, 22, and her 2-year-old daughter, Jenice Paola. Across the top of one of the papers, someone has printed a Connecticut phone number.

Amaya’s mother, Lidia Mejia, answers the call. She crossed into the U.S. six years ago after her two sons were slain. When the men who killed them threatened the family again this year, she says, she sent for her daughter and granddaughter. Amaya and Jenice arrived in Waterbury, Conn., a week ago, she says.

She passes the phone to Amaya, who says she is happy to have crossed the river safely. She had forgotten to retrieve her documents when she left the diaper bag behind. As her toddler babbles in the background, Amaya asks to have the certificates mailed to her new address, the one she scrawled across the copies before leaving Honduras.

Another crumpled scrap of paper adrift in the brush near the river has “Papi” and “Mari” scrawled in pen next to northern Virginia phone numbers. The first one doesn’t work. But Mari Vicente answers the second.

Vicente, 30, a homemaker from Guatemala living in the U.S. legally, says she isn’t sure who carried her number across the border.

“I can’t tell you because I don’t have family coming here,” she says.

Vicente has a friend in Guatemala, a 24-year-old woman with a 7-year-old son, who talked about migrating to the U.S. recently after she was threatened by gangs. But Vicente is sure her friend is still in Guatemala.

“She heard parents with children could come,” says Vicente. “So she may come for the opportunity.”

Lodged at the foot of a mesquite tree near the river, wrapped in a small plastic bag, is a neatly folded copy of the Salvadoran birth certificate for 15-year-old Erick David Landaverde Galdamez. Inside, someone tucked a small rectangle of notepaper with handwritten phone numbers and email addresses, including the number for his mother in Ohio.

Border Patrol agents called the number late at night last weekend to ask: “Are you the mother of Erick?”

Agents say her son is in custody, ask for her address and say to expect another call. They don’t say when.

The Border Patrol doesn’t usually allow youths to make phone calls. Agents confiscate their belts and shoelaces and issue them wristband IDs. But the agency is required by law to transfer youths within 72 hours to federal shelters. Once there, the young migrants are supposed to be allowed to call their parents. But Erick — who goes by his middle name, David — hasn’t called.

On Wednesday, Galdamez calls a federal hotline. A woman tells her David is at a federal shelter. She must wait for a government social worker to call this weekend.

A few days before he crossed the river over a week ago, David sent his mother a message on Facebook telling her not to worry. But Galdamez, 39, has been having headaches ever since her eldest son received threats from a gang in El Salvador and fled March 4.

He’s a shy boy, she says — good at math, a homebody who lived with his grandmother and 8-year-old sister in Nueva Concepción. He helps around the house after school and hopes to study business administration or maybe become a doctor, his mother says.

Galdamez left for the U.S. with her husband when David was 2. They built a new life with three younger children. She’s a homemaker; her husband paints houses. One night this week, after he came home from work, she caught him crying in his room, desperate to see their son. They paid $4,000 to smuggle David north. They have a room waiting for him, and she has made him pupusas.

“I’m going to help him until the day I die,” she says by phone from her home in Columbus, where she is awaiting the social worker’s call about when and how she might claim her son.

Galdamez asks to have the dusty copy of her son’s birth certificate mailed to her. She hopes it might help him stay in the U.S. legally.

“He has his pruebas,” she says. “I’m not here legally, but I’ve never done anything against this country.”

Before leaving the riverside, migrants receive plastic property bags labeled “Homeland Security” and government “baggage check” tags for their belongings. The night wind snatches a few, strewing them across the bushes, including one belonging to 9-year-old Jacsi Carranza Novoa of Honduras, whose tag says she arrived alone.

Some of the property bags accompany youths like Jacsi to federal shelters. Others are returned to migrant families being released to a local church, where they receive donated food, clothes and prayer cards that read: “I do not see the road ahead of me. I cannot know for certain where it will end.”

Not everyone makes it to the church. The bags belonging to migrants expelled to Mexico blow in drifts on border bridges.

At the foot of the bridge in Reynosa, Mexico, migrant families, many still wearing Border Patrol-issued wristbands, open their bags only to discover that they have lost more than a chance at a new life.

“We don’t have phones or anything to communicate with people. What can we do?” says Norma Najera Perez, 23, holding out her empty hands to her daughter, Sandy Ortega Najera. The 7-year-old wears a wristband that reads “Property: None.”

“We dropped everything at the river,” says Cesar Garcia, 50, a Guatemalan machine operator who crossed the Rio Grande with his three sons, ages 8, 10 and 12, hoping to join his wife in Los Angeles.

Reynosa is a cartel hub where Central American migrants are easy prey. Those who stay near the bridge risk assault, kidnapping and extortion. But so do those who try to leave by taxi. Few can even afford the fare.

“Where are we supposed to go without money?” asks Najera. “I’m scared to spend the night here.”

“Many don’t have homes to go back to,” says a 17-year-old Guatemalan, Yan Alfaro.

Scores of migrants camp together in a nearby park. They spread their few belongings across the concrete floor of a gazebo. They ponder what to do next.

And they long for the Mexican cellphones, snacks and pesos they dropped in haste in the dust of the opposite riverbank, in the land that wouldn’t take them.