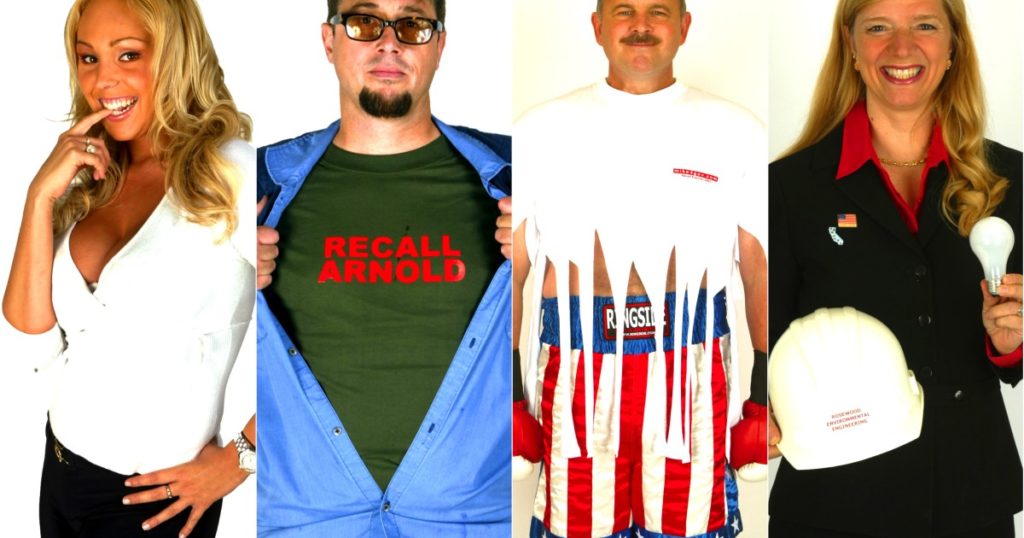 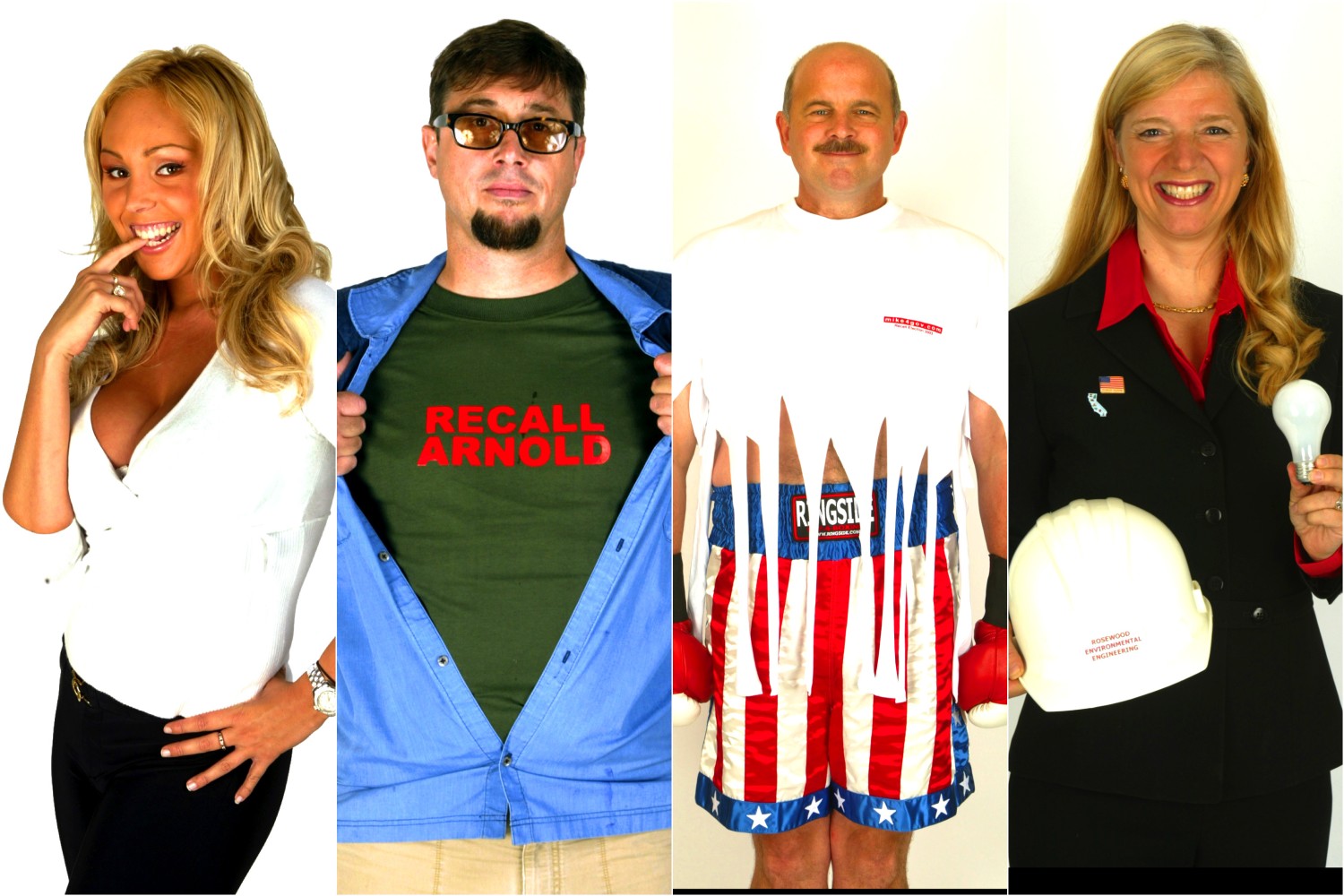 In the summer of 2003, Jayson Haedrich, Nick Regalbuto and Robbie Stauder took a flight from New York to Los Angeles with hand-held cameras in their luggage and hopes of big-screen glory.

The twentysomethings had just read up on the circus that was California’s recall election of then-Gov. Gray Davis. They wanted in and began to cold-call nearly all of the 158 candidates in the race, Stauder said, to see who were “the funniest ones we could find.”

Each, to put it nicely, had quirks.

Bly-Chester was a no-nonsense soccer mom easily frustrated by the ocean of civic clowns that floated around her. Russell sold thongs that read “Georgy for Governor 2003.” Carey had a habit of flashing reporters. McCarthy was perpetually dressed in star-spangled boxing trunks, a robe and an Uncle Sam hat. And Tsangares — get this — ran to protest the recall.

Haedrich, Regalbuto and Stauder eventually shot more than 200 hours of footage that they hoped to craft into a hilarious documentary that would air on public television and at film festivals, and earn back some of the $100,000 of their own money they put into production.

None of that happened.

Their final product, titled “Gubernatorious,” instead turned out to be a wry, heartfelt treatise on American politics. The lesser-known recall candidates appeared not as the punchlines that the documentary’s directors originally intended, but rather as model citizens who finally had a shot to be heard in a political system stacked against them.

But by the time the filmmakers were ready to premiere a rough cut in 2003, no one was interested.

“People were sick of anything recall,” Stauder said.

He and his partners screened it for friends and family to raise funds, at a film festival that none of them attended, and at a free Sacramento State event in 2013 attended mostly by students who showed up to earn extra credit. After that, “Gubernatorious” sat untouched across 10 hard drives for the next eight years as Stauder and the others went on to successful film production careers.

Then in April, the California secretary of state announced that opponents of Gov. Gavin Newsom had gathered enough signatures to force a recall election. Now, the “Gubernatorious” guys are going to tidy up their long-shelved effort and try one last shot at cinematic immortality.

“If there’s ever a chance to find an audience for this,” said 45-year-old Haedrich with a laugh, “this is it.”

“It’s a time capsule and an interesting story about people going for it with no chance in hell to win,” said Regalbuto, 44. “It’s silly for it to be on a shelf.”

“When we finished, and there was no interest, so it didn’t seem like it had any meaningful impact on the future,” said Stauder, also 44. “But I hope now, people think differently.”

They let me see “Gubernatorious,” and I didn’t honestly expect much. Really, what could three guys based on the East Coast tell me about a moment in my state’s history that I lived through and remember well?

But the documentary is actually a mini-marvel. “Gubernatorious” is a brisk delight that public television stations across California should air for its entertainment value, but also its simultaneous lessons in history and decency. It works as an important visual and audio archive of a key moment in California history. And it’s one of the few artistic efforts about the Davis recall I’ve ever come across that didn’t treat lesser-known candidates as a bunch of one-liners.

In the mad spectacle that was the 2003 recall, “Gubernatorious” argued, the sanest ones were the supposed crazies.

Stauder said he and his partners already knew the outcome of the film “before we even started: Everyone we were going to follow was going to lose.” So they focused on just quietly following their quixotic subjects over the course of the 2003 recall campaign, letting what transpired speak for itself instead of butting in with off-camera narration or on-camera questions.

“They didn’t have a polished persona, so there’s an earnestness about them,” Haedrich said. “They just wanted to be heard. The arcs happened naturally.”

The approach exposes who really deserves mockery: the rest of us.

Male reporters openly smirk as they interview Bly-Chester and ogle Carey wherever she went. Law enforcement boot candidates from rallies for eventual winner Arnold Schwarzenegger, who pals around at events with current laughingstock Rudolph W. Giuliani. Crowds blindly cheer on the Terminator as they heckle Tsangares, who’s arrested at one point for standing in front of Schwarzenegger’s bus. Russell repeatedly tries to engage in impromptu debates with then-candidate Arianna Huffington, only to see the socialite, her face dripping with disgust, brush off Russell as staff — including a young Van Jones — shoo her away.

Haedrich says neither he nor his partners have any interest in doing a similar documentary on the Newsom recall effort. It doesn’t have the same cachet as the Davis one, for one.

“It really was a lightning-in-a-bottle moment,” he said. “Schwarzenegger, people loved that guy. The state was more conservative. Now, it’s bluer. And no one seems like they’ve captured the public imagination. This time, it seems like it’s going to be a circus that ends with a fizzle.”

Stauder argues that today’s media and political landscape has also leveled the David-versus-Goliath atmosphere of 2003.

“They couldn’t penetrate the mainstream back then because the media ignored them or ridiculed them, so that naturally created tension,” he said. “But now you have social media, and the rise of people like AOC [Rep. Alexandria Ocasio-Cortez] who know how to plug into that. Ideas now have a far easier way to reach the public.”

Besides, he continued, the political climate has changed for the worse.

“The contrast of the innocence of what happened [nearly] 20 years ago compared to the danger of what we experienced six months ago [during the Jan. 6 Capitol invasion] hit me pretty hard about how far we’ve come,” Stauder said. “Yes, there were scuffles and people yelled at each other back then, but it was innocent. Now, those same divisions have turned violent and scary.”

The “Gubernatorious” guys understand the historical weight of what they captured so long ago, so they’re touching up the documentary — some color corrections, a new soundtrack, and captions to identify the dozens of other candidates who made cameos. The plan is to put out the movie one way or another: a network, a short tour, an online screening, anything. The directors are once again spending money and time that no one ever expects to recoup, which doesn’t faze Haedrich at all.

“I feel like I’m one of these candidates now,” he said. “Why do it? Because you have to.”