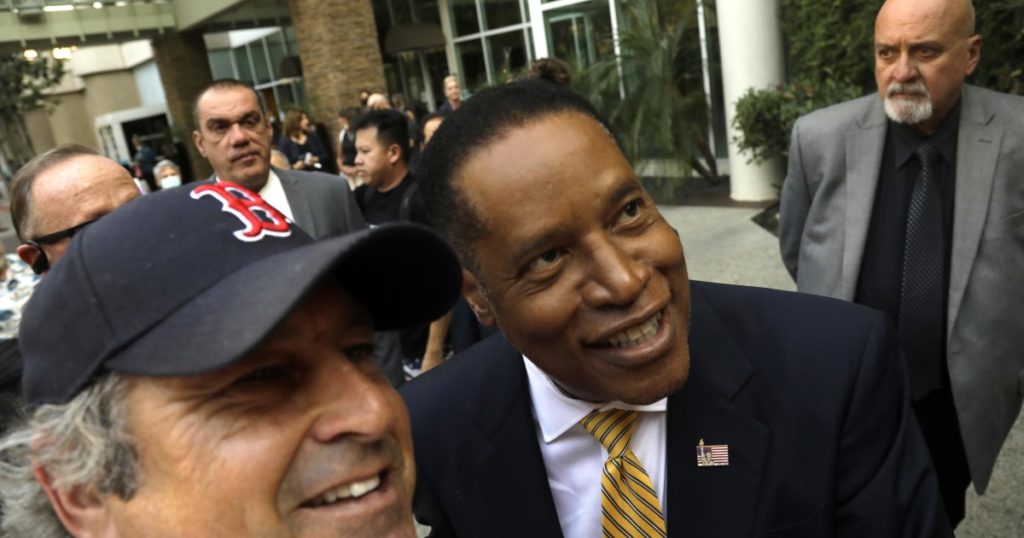 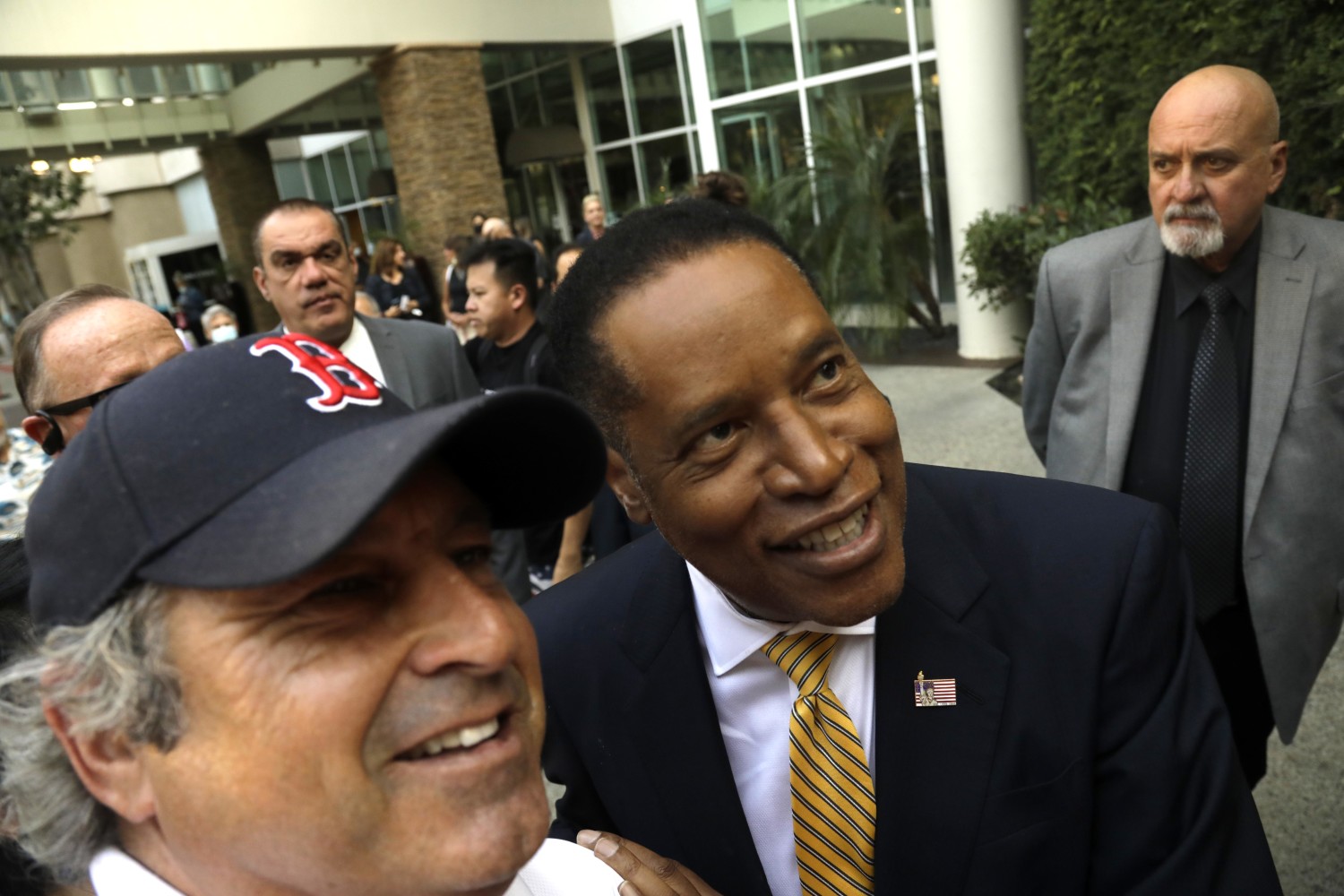 You read the headline right.

Larry Elder is el más Latino of the major candidates in the California recall. Even though one of his campaign advisors is former California Gov. Pete Wilson, who rode anti-Latino sentiment in the 1990s to reelection but also turned off Latinos to the GOP for a good quarter-century. Even though Elder still serves as a mentor to Stephen Miller — who’s basically to immigrants what a shark is to a seal.

But hear me out:

Elder’s father was stern and distant; his mother, a saint. Both of them were California newcomers who scraped together earnings from blue-collar jobs to buy a home in a middle-class neighborhood that got tougher to live in as the years went on. But the couple kept Elder and his siblings in check, mostly by telling them to never whine and to always work harder.

The young Elder absorbed that no-excuses mentality. He overcame an underachieving high school to find academic glory in college. He returned to his community and mentored young people who found themselves facing the same obstacles he once did. All these decades later, Elder still thinks that what society needs more of than government is the plainspoken wisdom of his parents.

There’s a knee-jerk familiarity with Elder any time I hear him babble. His swagger and respectability politics are what my blue-collar cousins say six Tecates into a carne asada Sunday.

When I read on Elder’s campaign website life lessons from his parents — like “Hard work wins. You get out of life what you put into it. You cannot control the outcome, but you are 100% in control of the effort” — I did a double take. Did Elder say it, or was it my dad, whose name — Lorenzo — is the Spanish version of Elder’s given name, Laurence?

It’s an origin story that Elder shares with me and multitudes of Latinos in the Golden State. Elder’s campaign knows this, so did a huge swing for Latinos last week. He held a video conference to boast about how polls then showed Latinos were almost evenly split on the recall. Joining him was former California Senate President Pro Tem Gloria Romero, a Democrat whose influence among Latinos is about as much as the third-string quarterback for the Las Vegas Raiders. And three days earlier, Elder released a laughably bad Spanish-language commercial in which he’s obviously reading from a script with phonetically spelled out words.

Two days later, polling showed Latinos were now largely rejecting the recall of Gov. Gavin Newsom, although the percentage of them who favored kicking him out was still higher than among other ethnic groups.

The talk show host’s token efforts and a shared narrative with Latinos aren’t going to be enough to get more of them on Elder’s side. Because he has an Achilles’ heel the size of a big rig, and it’s the same one his party has left exposed for decades: illegal immigration.

Elder, to put it nicely, doesn’t like it. He doesn’t want undocumented immigrants to get citizenship — not even DACA recipients — or get any healthcare from California. Elder reprimanded the L.A. Times’ editorial board for using the term “undocumented immigrants” during a Zoom chat, preferring the nastier-sounding “illegal alien” because using the former “soften[s] the attitude towards illegal aliens and minimize the harm that illegal aliens do to our country.”

Such blathering might play for the Stephen Millers of the world, but Elder’s thoughts on the matter are wildly out of touch with Californians. Surveys released this spring by the nonpartisan Public Policy Institute of California found 85% of California adults surveyed favor a pathway to citizenship for undocumented immigrants, and 66% approve of them getting state healthcare.

For Latinos, the numbers who support each scenario are even higher: 92% and 83%, respectively.

It’s just the latest example of how clueless conservatives remain on Latinos a quarter-century after Proposition 187, the 1994 California ballot initiative that sought to make life miserable for illegal immigrants but instead created a generation of Latino Democrats. You almost feel bad for the GOP and Elder on this matter — they’re like the blind pig who nearly gets the truffle but keeps missing because, well, the pig is blind.

Elder’s mantra that government should bow down to the might and insight of the individual taps into rancho libertarianism, a strain of Latino politics that Democrats pretend doesn’t exist and that Republicans are just realizing does.

It’s the mantra of the silent majority of Southern California Latinos — not the ones who march to defund the police or identify themselves as Latinx, but the ones with roots in rural Latin America. Parents upset at school shutdowns. Workers and small-business owners angry that flojos — lazy people — collect coronavirus unemployment and stimulus checks while they continue to grind. People who don’t want to hear about victimhood. Who helped to make “The Fast and the Furious” a multibillion-dollar empire but didn’t care for the much-hyped “In the Heights” flop of this past summer.

Rancho libertarian ideology is what helped Trump gain more Latino voters during the 2020 election than in 2016. They didn’t necessarily like Trump, but they felt left out by liberal politicians who seem to focus more on pie-in-the-sky initiatives for the neediest instead of bills to support those who “made it.”

Democrats call those type of Latinos vendidos — sellouts. I call them the people I grew up with in Anaheim — and we’re the liberal ones in our circles. They’re the Latinos that can put Elder in Sacramento.

But the rancho libertarian never forgets the rancho part of that label. They still remember that either he or she or their older relatives once came to this country with little more than dreams — sometimes legally, sometimes not. The “how” didn’t matter; it’s what happened once they established themselves in the U.S. that counts.

That’s why those Latinos don’t mind big government programs to help out undocumented folks. Because they were once them, the very up-by-the-bootstraps defenders of work, faith, and freedom Elder and Republicans claim to champion.

Enough Latinos continue to support the recall effort against Newsom in numbers that have shocked pundits, a phenomenon I wrote about in a previous column. But wanting to kick out Newsom won’t translate into support for Elder. He reminds me of a quote said by Gaddi Vasquez, the former Orange County supervisor who now sits on the Public Policy Institute of California’s board of directors. During the 1988 Republican National Convention, Vasquez ridiculed then-Democratic presidential nominee Michael Dukakis, who gave part of his acceptance speech en español.

“The Democratic candidate may speak Spanish,” Vasquez said back then. “But he doesn’t speak our language.”

Lorenzo Elder: Get back to us when you’re fluent in Latino.