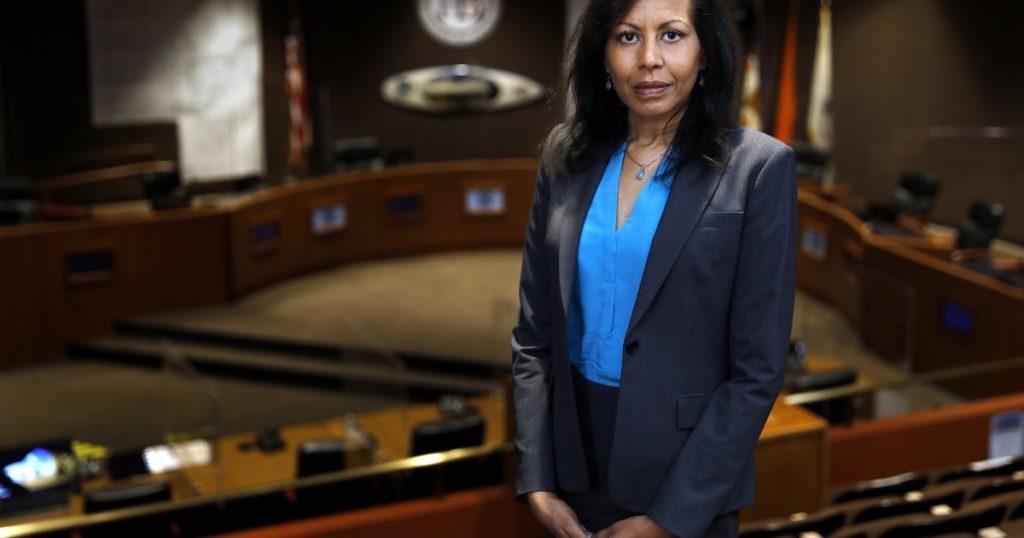 She was appointed to the seat, in a city notorious for its white supremacist scene, after the resignation of Tito Ortiz, the mixed martial arts legend and coronavirus skeptic who won a council seat in November with the most votes ever but lasted barely half a year.

Some speakers congratulated Bolton, a Democrat, on her new position and historic accomplishment. But because Huntington Beach is Huntington Beach, the council meeting quickly turned into a spectacle reminiscent of a kindergarten scrum.

The ugliness started the week before, when Bolton was sworn in to jeers and shouts of “Transplant!” — a curious insult likely motivated by the fact that she and her family moved to the city, which is 1.4% Black, about eight years ago from Washington, D.C.

At her first meeting, audience members booed after a staffer for Orange County Supervisor Katrina Foley presented Bolton with a certificate of recognition.

Speaker after speaker lobbed wild-eyed accusations at Bolton — that a “globalist ideology” facilitated her selection, that she is an “extremist” who indulged in “racial pandering” through her diversity consulting firm, that she wants to impose a “radical agenda on the innocent youth of our city.”

An online article that Bolton published last year on July 4 expressing her faith in the U.S. despite enduring a lifetime of racism was dismissed as “hateful, spiteful [and] anti-white.” A Mexican American woman who identified as conservative claimed that Bolton took a council seat “from Latinos.”

And then came the grand reveal of the night: A member of the group Save Surf City announced an effort to recall Bolton and five other council members. The group’s rationale, according to its website: Bolton’s appointment was “disenfranchising the voters of Huntington Beach.”

There was only one problem, according to City Clerk Robin Estanislau: California law doesn’t allow Bolton to be recalled until she has served at least 90 days.

The council member had served barely half an hour.

Bolton didn’t address her critics during the meeting. Asked for comment afterward, she replied via text, “I’m focused on continuing to work on matters that help make the city even better.”

I watched the City Council proceedings online with increasing bemusement as the parade of unmasked pandejos proceeded. They didn’t even bother to let Bolton govern before targeting her for removal.

That’s a power grab I seriously doubt they would have pursued if Gracey Van Der Mark, not Bolton, were Surf City’s latest council member. Van Der Mark, who finished fourth in the November election, is of Ecuadorean descent and was Ortiz’s choice to replace him. She fears that Huntington Beach is turning into Los Angeles, whatever the hell that’s supposed to mean.

Conspiracies and spittle drive politics today nationwide, sadly. But nine hours earlier, at a juice bar on the edges of downtown H.B., I got a different vision of what’s possible.

There, Bolton tried to convince me that Huntington Beach — a town Orange County lifers like myself have criticized for years for ugly, xenophobic politics proudly out of touch with modern-day O.C. — is a great place to live.

“It’s a vibrant city,” said Bolton, who gave her age as “over 40” as she slowly sipped a protein shake.

Soft-spoken, with a cheery laugh, the mother of two had moved to H.B. after becoming head of diversity initiatives at the Irvine headquarters of car company Kia America.

Bolton had always wanted to live in a beach town, but new colleagues warned her and her husband about Huntington Beach’s racist reputation.

“If that’s what people are aware of, they’ll hesitate about a place,” she said. “But it didn’t deter us. We loved what we saw, and I don’t regret it.”

I asked if she had ever experienced racism in Surf City. Only her children had at school, Bolton replied, demurring on the specifics.

“But that happens anywhere — that’s just a fact of life for people of color,” she said. “It’s not exclusively Huntington Beach.”

This is H.B.’s Manchurian candidate. Someone whose favorite television show is “Engineering Catastrophes” on the Science Channel, because “I like problem-solving in any capacity.” Who doesn’t attack haters. Who looks past stereotypes to give people and places a chance — to give Huntington Beach a chance as a Black woman.

All this recall fuss over her? No wonder the city’s MAGA crowd hates her. Their scorched-earth ways make QAnon believers seem as logical as Vulcans.

Bolton beat out a field of 105 candidates to take Ortiz’s seat. The appointment made her one of a handful of Black City Council members in the 152-year history of Orange County, the only major metro area in the U.S. with a Black population of less than 5%. (U.S. Census Bureau estimates for 2020 clock it in at 2.1%.)

Her vote means that Huntington Beach — the too-tanned crucible of what’s left of Republican power in Orange County — now has a Democratic majority.

The council member downplays her historic role. “It shouldn’t matter, but it is what it is,” she said. “I didn’t say I was Black on my City Council application. But you can’t ignore it. I’m happy I’m a first, but it’s 2021. I can’t believe that we still have firsts.”

The daughter of a chemist and a teacher, Bolton grew up in Dallas and spent about 15 years working in Washington as a congressional aide and lawyer before getting into the world of diversity consulting because “there was a lack of people of color the higher I went.” She never considered a career in politics until Ortiz’s resignation, when she figured it was “time to stop yapping and do something.”

Bolton had already participated in civic life through the Huntington Beach Human Relations Task Force, for which she moderated virtual forums to cool down the city after a summer that saw residents ridicule Black Lives Matter activists during downtown rallies.

“She was always the last person to speak, because she was listening to everyone,” said Huntington Beach Councilwoman Natalie Moser, who voted for Bolton’s appointment and is now threatened with recall because of it. “That’s the type of leadership that we need on our council. Open to listening to all people, and not someone who’s going to rush to judgment.”

Bolton wrote in her council application that, if picked, she would “get down to business with minimal delay or distractions, and with a positive, collaborative attitude.”

Bipartisanship is a theme she emphasized during our conversation.

“Hyperpartisanship is stopping people from governing,” she said. “The people in the middle, we have to stand up now. No one wins or loses 100% of the time. Public policy is not a football game.”

Bolton knew even before her first meeting that she would become a flashpoint for our nation’s political debates. She found the gestures at her swearing-in “shocking” but took it in stride.

“Everyone has a right to criticize public officials,” she said. “But the rule I apply is that, what would your mom tell you? And chances are that your mom wouldn’t tell you to go into chambers and scream at someone.”