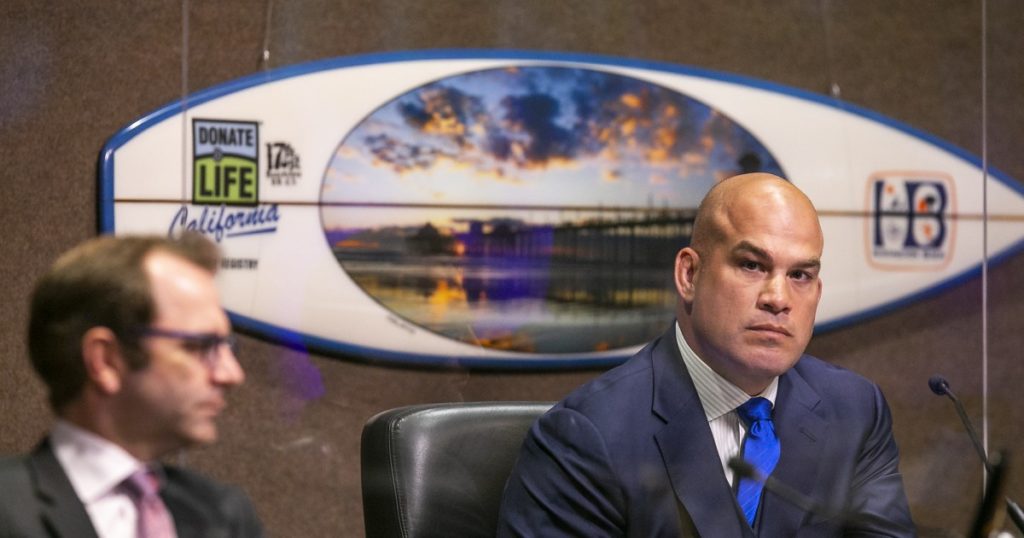 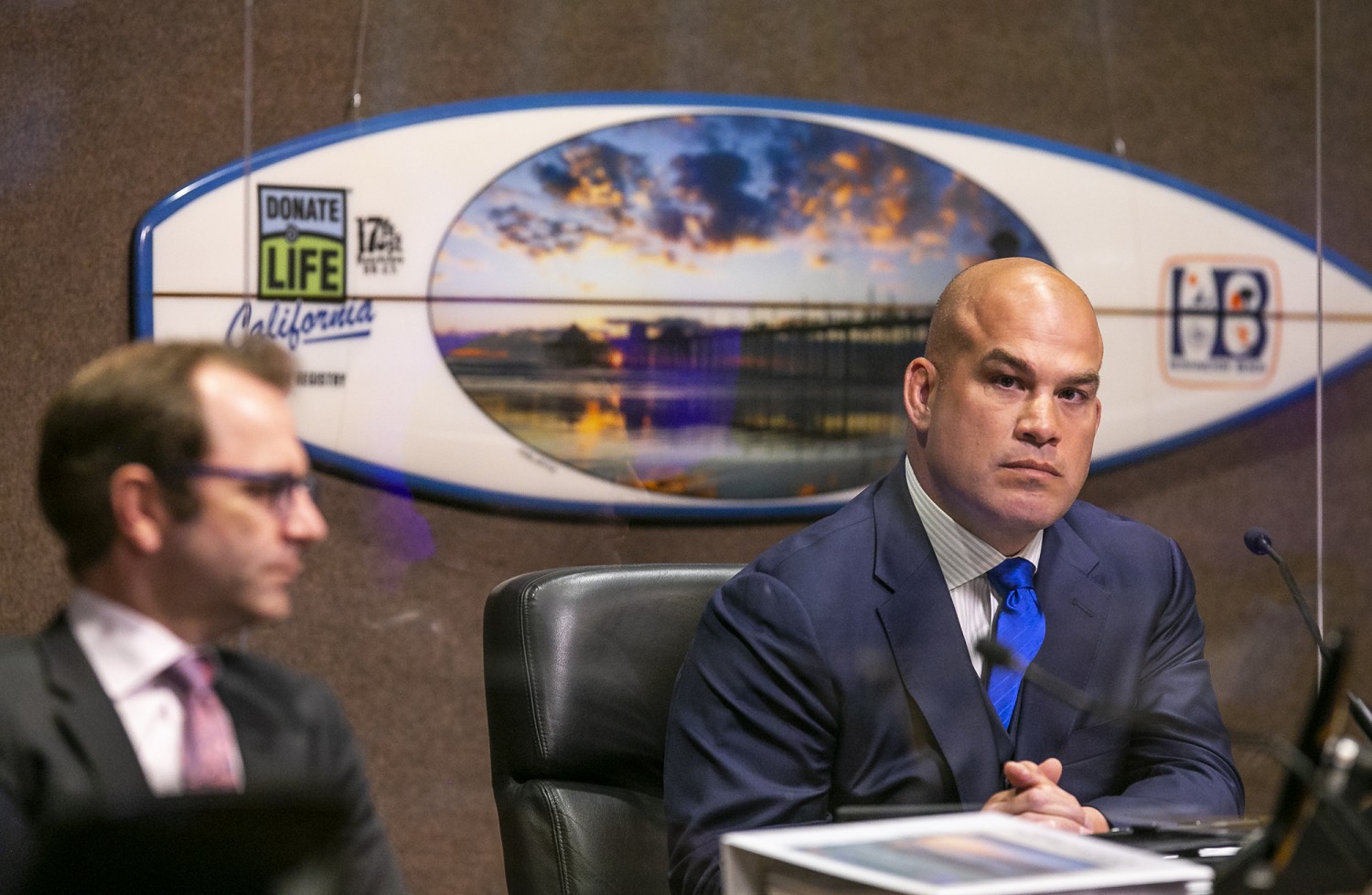 The political career of Tito Ortiz was short and flashy before fizzling like a meteor plunging into the Pacific.

The former mayor pro tem of Huntington Beach fancied himself the Donald Trump of Orange County, gaining national attention for calling COVID-19 a “plandemic” and “political sham” and for his confrontational refusal to wear a mask in public.

He recently quit less than six months into his first and only City Council term, apparently finding the minutiae of local governing — budget reviews, committee hearings, personnel decisions — less fun than sailing his boat through Huntington Harbour with “Trump” and “Tito” flags flying.

Brief though it was, Ortiz’s stretch in small-time politics reflects something much bigger: a political culture that spurs conflict, rewards intransigence and empowers the loud and adversarial, even if polls show most voters would rather their lawmakers give in some if it means getting things done.

Increasingly, politicians from City Hall to Capitol Hill are incentivized — by the bases of the two major parties, the flow of campaign contributions and by the outsized media attention they receive — to stake out unyielding positions, shun compromise and treat those who disagree with them as evil and the enemy.

“The electorate as a whole is not there,” said Mo Elleithee, a former Democratic campaign operative who heads the Institute of Politics and Public Service at Georgetown University. “That’s where the big disconnect is.”

With Ortiz and other COVID deniers leading the charge, Orange County came to be seen as a hotbed of resistance to medical science and emergency health mandates. Some local leaders resisted a state order to close beaches. Orange County’s chief health officer quit after receiving death threats and little backing from a timorous Board of Supervisors.

(Before seeking office, Ortiz, 46, was a professional mixed martial arts fighter, which he may have seen as training for how one is supposed to engage in elected office.)

And yet in a poll conducted in the winter as the pandemic was raging, an overwhelming majority of Orange County voters approved of government efforts to stem the deadly virus, including social distancing and a national mask mandate. Only about a quarter of those questioned felt the government had gone too far.

“Political extremists make the headlines, but a reasonable silent majority persists in our county,” said Fred Smoller, who teaches political science at Chapman University and helped conduct the poll.

There’s room for robust debate, Smoller went on, which is both healthy and necessary in a functioning democracy. “But a small group of people protesting in Huntington Beach and the [Orange County] Hall of Administration” shouldn’t have cowed elected officials, he said, or been taken as reflecting the broad sentiment of county residents.

But that’s one of the big problems with today’s politics: The system disproportionately empowers a rowdy minority and helps drive lawmakers toward the extremes.

Thanks to the internet, grass-roots fundraising has exploded, decreasing the influence of corporate contributions and political action committees. (Yay for the people!) But it also happens that the best way to get folks to open their wallets is to rile them up — “Give generously so I can thoughtfully negotiate and then settle for the best deal possible” isn’t exactly a clarion call.

The perverse practice of letting many lawmakers draw their own political districts also pushes the two sides apart. (In California, it’s done by an independent commission.) Lines are often drafted to minimize competition between parties and virtually ensure a Democrat or Republican gets elected. So the greatest fear many lawmakers have is losing a primary, which attracts the most ideological and uncompromising members of their party.

“Those are the people who are funding campaigns and working in campaigns and making phone calls,” said Kirsten Kukowski, a veteran Republican strategist, who has worked on national polls Georgetown has conducted over the last several years. “They’re the ones on [lawmakers’] Facebook feeds, they’re the ones tweeting at them, so those are the people they’re seeing and hearing from.”

Polls have repeatedly found most voters consider themselves closer to the middle than the far reaches of either major party, and they wish their political leaders would be more willing to compromise.

In the latest Georgetown survey, voters rated the country’s political division as their top concern, a sentiment shared across partisan, racial and ideological lines.

The bipartisan poll of 1,000 registered voters nationwide also found an overwhelming majority believed compromise for the sake of getting results was far more important than ideological purity, a finding consistent with other research.

There is no organism on Earth more sensitive to heat and light than a politician, so it’s no surprise they respond to their most clamorous constituents, even if they represent a minority viewpoint.

“That’s the default position,” said Elleithee, the former Democratic operative. “Take no prisoners; accept no compromise — because that’s what is rewarded by the party bases.”

None of that will change until and unless politicians find it in their interest to listen to those who are less strident and ideologically dug in.

In politics, as in nature, the loudest voices carry. If people are tired of the extremes commandeering the political discussion, they need to speak up more.