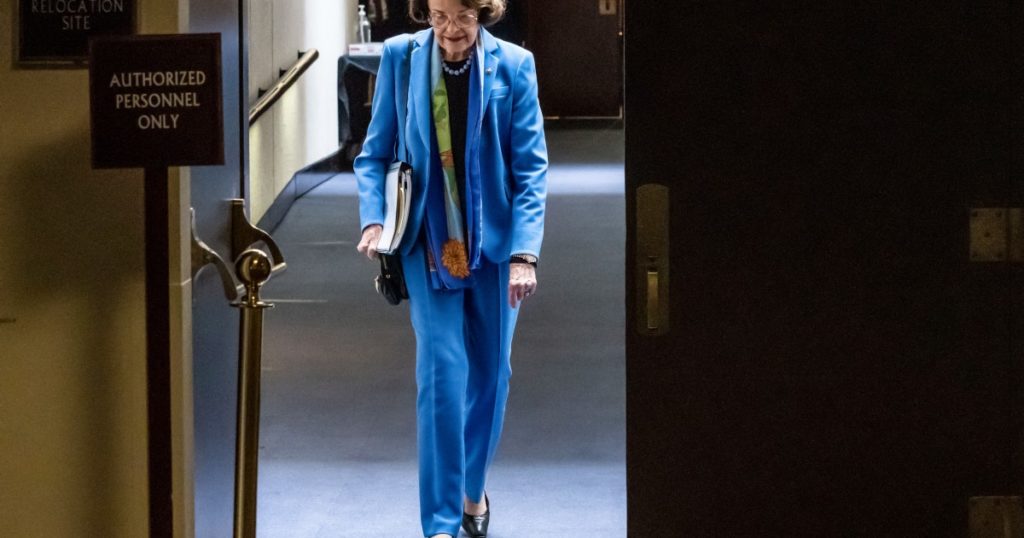 They came from various backgrounds, in business, education and government. One had been a social worker, another a paralegal, a third a civil servant.

All, save one, had retired. All for different reasons. Burnout. Health issues. A wish to travel more.

Virtually all agreed it was time for Feinstein and Breyer to do the same — quit and relinquish their power — and each member of the Democrats of Rossmoor Club gave the same rationale: for the good of the country.

“If Feinstein were thinking the way we’d like her to think,” said Jim Ware, 78, “she’d be looking at, ‘How can I bring in someone who has more energy to do this than I do?’”

“This is our opportunity,” Karl Livengood, 82, said of Breyer stepping down, saying it would give President Biden the chance to name a younger successor who could serve a good deal longer on the court.

Age has nothing to do with it, the Democratic activists insisted. It was a matter of urgency and a question of who might replace the two octogenarians if they don’t leave soon.

With insurrectionists overrunning the Capitol and poor losers challenging the country’s foundational principles, “This is a dangerous time,” said Gil Peterson, 78.

Feinstein, the oldest member of the Senate, observed her birthday Tuesday, an occasion marked by news accounts that noted her accumulation of years, occasional mental lapses and increased estrangement from liberals in the Democratic Party. The latest provocation came last week, when Feinstein told Forbes magazine she saw no need to end the Senate filibuster to pass voting rights legislation, as she sees no peril to democracy in this moment.

Breyer is subject to the usual retirement speculation that comes at the end of a Supreme Court term, heightened this time by the narrow window many see for Biden to push a nominee through the Senate while Democrats enjoy at least nominal control.

“As much as I loved her all those years, I’m really mad at RBG,” Alice King, 77, said of liberal Justice Ruth Bader Ginsburg, who stayed on the court until her death last September at age 87. Her passing allowed President Trump to replace her with the conservative Amy Coney Barrett, who is 49.

The small discussion group came together in Jim and Cindy Wares’ townhouse, high up in a 55-and-older community in the East Bay hills, where the strong opinions offered a stark contrast to the tranquil setting.

This was no collection of restless youth, eager to shove their elders aside. Many spent decades in their careers and came to the inevitable point of asking whether they still had something to offer, or should be replaced by someone younger and fresher. Most answered that question by working into their 70s, and even their 80s.

To a person, they opposed any sort of mandatory retirement age.

“I think we all have something to contribute, if we’re able,” said Peterson, who left the medical device field in his mid-60s only after facing his fifth bout with cancer.

But virtually all supported term limits, for legislators as well as members of the U.S. Supreme Court. Too much time in power makes both lawmakers and judges too entrenched, they said, and too unresponsive to the wishes of voters.

If Breyer listened more closely, most said, he would appreciate the near-panic among Democrats who fear a repeat of Barrett’s appointment or another procedural roadblock by Republican Senate leader Mitch McConnell, who left a Supreme Court seat vacant for more than a year to keep President Obama from filling it. McConnell recently suggested he would also obstruct Biden if the GOP wins back control of the Senate in 2022.

Gourdine disagreed. There are no guarantees in life, she said, so who knows whether Biden’s pick would be the progressive many Democrats hope for, or whether he or she would live to serve a good long time.

Ware was ambivalent; maybe term limits are better than singling out any particular justice, he said.

There was no division, however, over the desire for Feinstein to exit.

She came and spoke to hundreds of members of the Democratic club in October 2018, when she was seeking reelection to her fifth full term. (With 1,000 members, Rossmoor claims the largest such party organization in the country.)

The jury of 11 was not impressed.

Feinstein seemed heavily scripted and controlled by her staff, they said. She leaned on others to answer questions during a limited give-and-take. “It was more managed than when [Kevin] de Leon came,” said Hartley, referring to Feinstein’s main Democratic rival in 2018. “He took a ton of questions.”

Feinstein handily won reelection, but since then discontent among Democrats has only grown.

She’s seemed confused at times. She hugged Sen. Lindsey Graham and praised the South Carolina Republican for his handling of Coney Barrett’s Judiciary Committee hearings, causing liberal heads to combust. Bowing to pressure within the party, Feinstein ceded the committee chairmanship when Democrats took over the Senate in January.

Would Democrats be calling for her retirement if, say, Feinstein was in her 40s and hugged Graham? “She would not have done that if she was 40,” Gourdine shot back, seeing the embrace as further evidence of the senator’s political and mental decline.

“She’s had a fabulous career,” said Gourdine, who worked in human relations for the cities of San Francisco and Oakland before retiring in her late 60s. “But at this point in time, where is she taking a leadership role? Is it infrastructure? Is it police reform? Voter suppression?

“She’s a senior senator from the largest, most populous state in the country,” Gourdine went on, now leaning forward in her chair, “and I would expect her to take a leadership role somewhere, and I haven’t been able to find it.”

Others were similarly riled. Mostly, though, there was sympathy tinged with sadness that Feinstein’s storied career has been diminished by its last chapter — splattering mud on an “otherwise sterling reputation,” as Linda Walonen, at 75 the youngest of the bunch, put it.

Not one in the crowded living room felt used up, or as if they’d outlived their purpose in life. Each said they’d found ways to stay active and productive and meaningful, by mentoring or consulting in their old profession or doing community service. They wished Feinstein would do the same.

From somewhere outside the U.S. Senate.