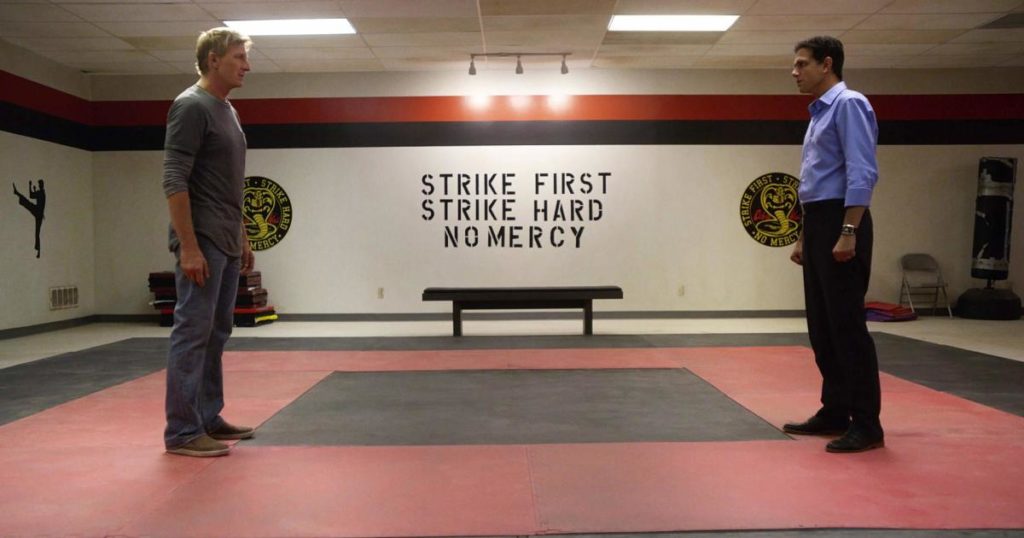 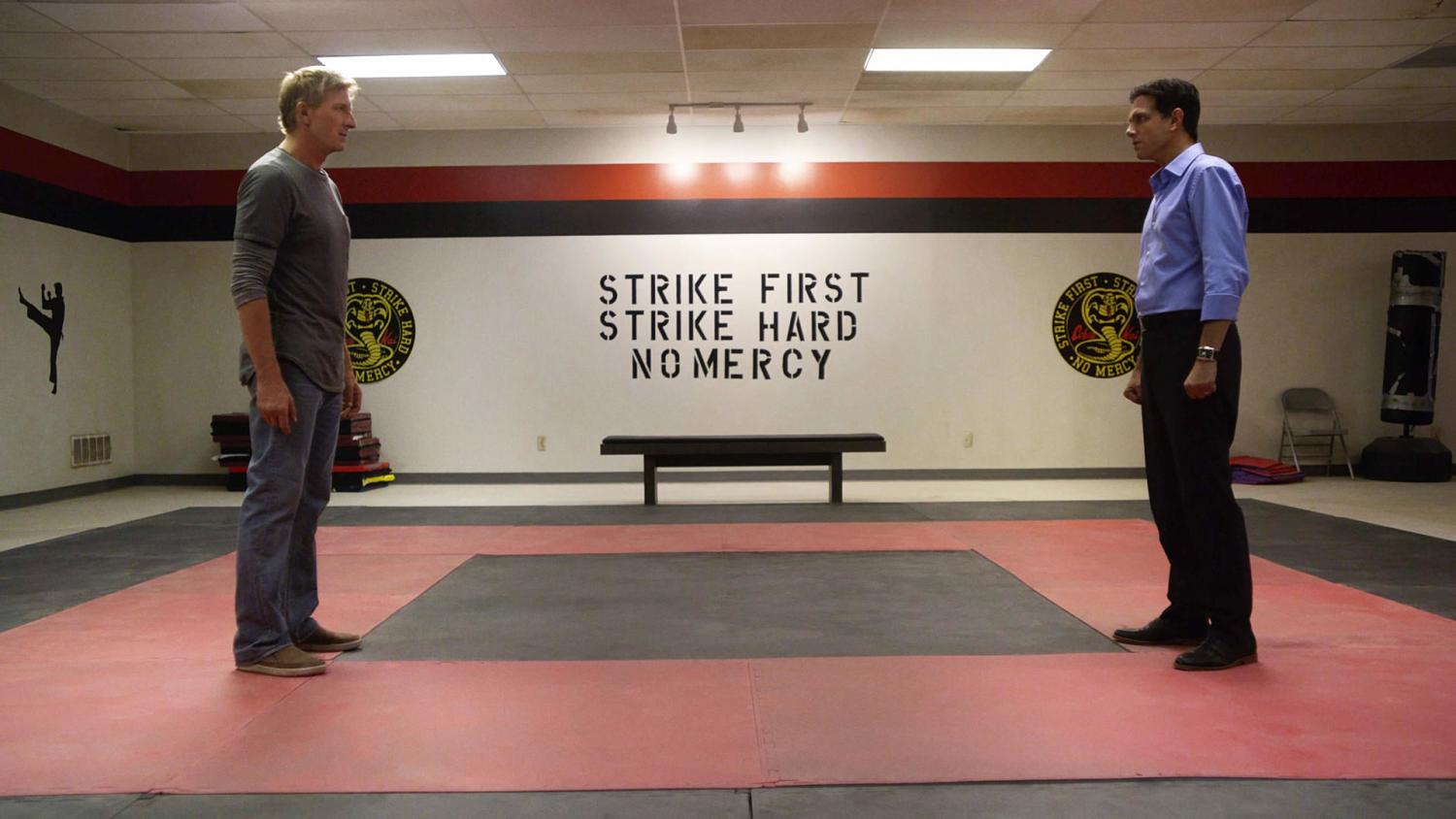 You know what this divided, embittered, frightened country needs right now to help heal ourselves after four years of Donald J. Trump?

A national binge-watch of the hit Netflix series “Cobra Kai.”

The dramedy, which saw its third season premiere Jan. 1, flips the script of the original movie; Daniel LaRusso is now the rich, cocky guy who lives in Encino, while Johnny Lawrence is the working-class handyman from Reseda — like Mr. Miyagi in the first four movies — who trains teens in martial arts so they can fend off bullies.

(Quick aside: As an Orange County lifer, can someone explain to me the difference between Encino and Reseda? It’s all Canoga Park to me).

With its campy dialogue, flurries of kicks and punches, a killer ’80s soundtrack and just the right amount of nostalgia, “Cobra Kai” is irresistible. It also inadvertently offers in the travails of teenage karate warriors something extraordinary: a way forward for all of us during these tumultuous times.

Unlike what Trump and previous “Karate Kid” efforts preach, “Cobra Kai” teaches that the bad guys and girls of the world shouldn’t be vanquished but rather brought into the light of good — deprogrammed instead of defeated. There are profound insights about repentance, redemption, forgiveness for past sins and unity in the face of existential evil. It’s the medicine we need to take in order to purge this past presidential term out of our democratic system forever.

Massive spoilers alert: If you plan to see “Cobra Kai,” put my column aside and read it next week, after you’ve watched all 30 half-hour episodes. If you’ve already watched them, or don’t plan to? Put on your intellectual gi, because your media-studies class begins now.

The series begins about 35 years after the last face-off between LaRusso and Lawrence, when the former beat the latter in a championship match that still remains one of the great upsets in cinematic history. (You remember the scene and quotes from that first “Karate Kid”: “Sweep the leg.” Crane kick. A smiling Mr. Miyagi in the final shot.) We learn that Lawrence never got over that humiliation, which left him a deadbeat dad, a low-key alcoholic and someone still living in the past and thus unable to flourish in the present.

Lawrence finally finds a positive purpose after he rescues an Ecuadorian American teen named Miguel from a beatdown. He reopens his old Cobra Kai dojo with the goal of toughening up nerds, a sharp contrast from its first iteration as a place solely for jocks bent on the mantra of “No mercy.”

Lawrence’s success draws the concern and jealousy of LaRusso to the point he opens a rival studio, Miyagi-Do Karate. The proteges of LaRusso and Lawrence summarily face off in competitions and around town, although their shared enmity is mostly within decorum until the arrival of John Kreese, Lawrence’s sociopathic sensei. He steals Cobra Kai and its students away from Lawrence, tells his new wards to destroy Miyagi-Do and its devotees, and ushers in an era of nastiness that leads to bloodshed and near-death.

Sound familiar? Yes, I’m comparing Kreese to Trump — although unlike Kreese, who flexes his own muscles to personally throw down, Trump is more of the school of inciting other people into insurrectionist violence while sitting his butt in front of the TV, popcorn in hand, to watch it like it’s “Monday Night Raw.”

Lawrence reminds me of the Republican Party. Both are incapable of getting over a long-ago loss (in the GOP’s case, Bill Clinton and Barack Obama) and thus being unable to adapt to modernity. Even when each tries to improve itself, it falls back on past habits — one kick forward, two kicks back. LaRusso is the Democrats — underdogs-turned-winners who spend too much time wanting to humiliate their eternal antagonists and thus are blind to their own hubris.

And Kreese, like I said, is Trump: the villain who cares only about himself to the point of using and abusing allies and enemies alike to destroy the very thing he claims to care for.

Where the show could have just continued down an easy road of mutually assured destruction, just like both the right and left seem hellbent on pursuing, “Cobra Kai” challenges viewers to consider an opposite route. You shouldn’t obsess over revenge, it proclaims. It shouldn’t be about an eye for an eye, or that old saw about the enemy of my enemy is my friend.

Instead, your enemy deserves forgiveness, because they were at one time most likely your friend. And if they weren’t, they nevertheless merit mercy and understanding because, as Oscar Wilde once wrote, every saint has a past and every sinner has a future. (Well, you would hope that of the GOP — which sometimes seems on a dangerous path toward turning into the “QOP” if it keeps accommodating QAnon and other conspiracy-theory wackos among its ranks).

The best manifestation of this is in the relationship between two characters named Demetri and Eli, who start the series as the dorkiest of the dorks. Once Eli falls under the sway of Johnny, he casts off Demetri to turn into a ruthless machine now named Hawk, complete with a resplendent tattoo of the raptor across his back. He becomes even nastier under Kreese, to the point where Hawk breaks Demetri’s arm during a brawl just because he can.

But Hawk eventually realizes that Kreese operates a death cult, right around the time both LaRusso and Lawrence acknowledge that their rivalry must end in order to stop Kreese forever. By the last episode of the third season, the two have united their dojos, and Demetri and Hawk are teammates and once again friends. Even Kreese agrees to have his students stand down with their attacks against their rivals until the next official tournament — the one part of “Cobra Kai” that sadly has no chance of happening in real life.

I saw this uplifting season finale the weekend before the Jan. 6 U.S. Capitol invasion. My rage and desire for fire and brimstone in its aftermath were tempered by the lessons that “Cobra Kai” had just depicted.

Criminality must be punished, yes. But we must also believe that people can snap out of their miasma, that people, as “Cobra Kai” concludes, can change for the better. Because if not, then democracy in America is going down in a painful heap like a guy kneed in the you-know-where.