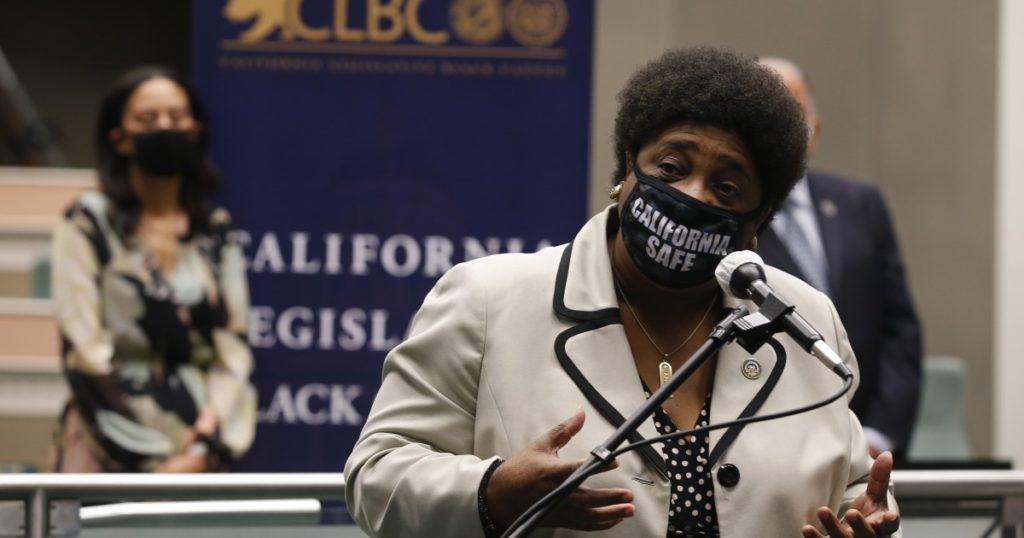 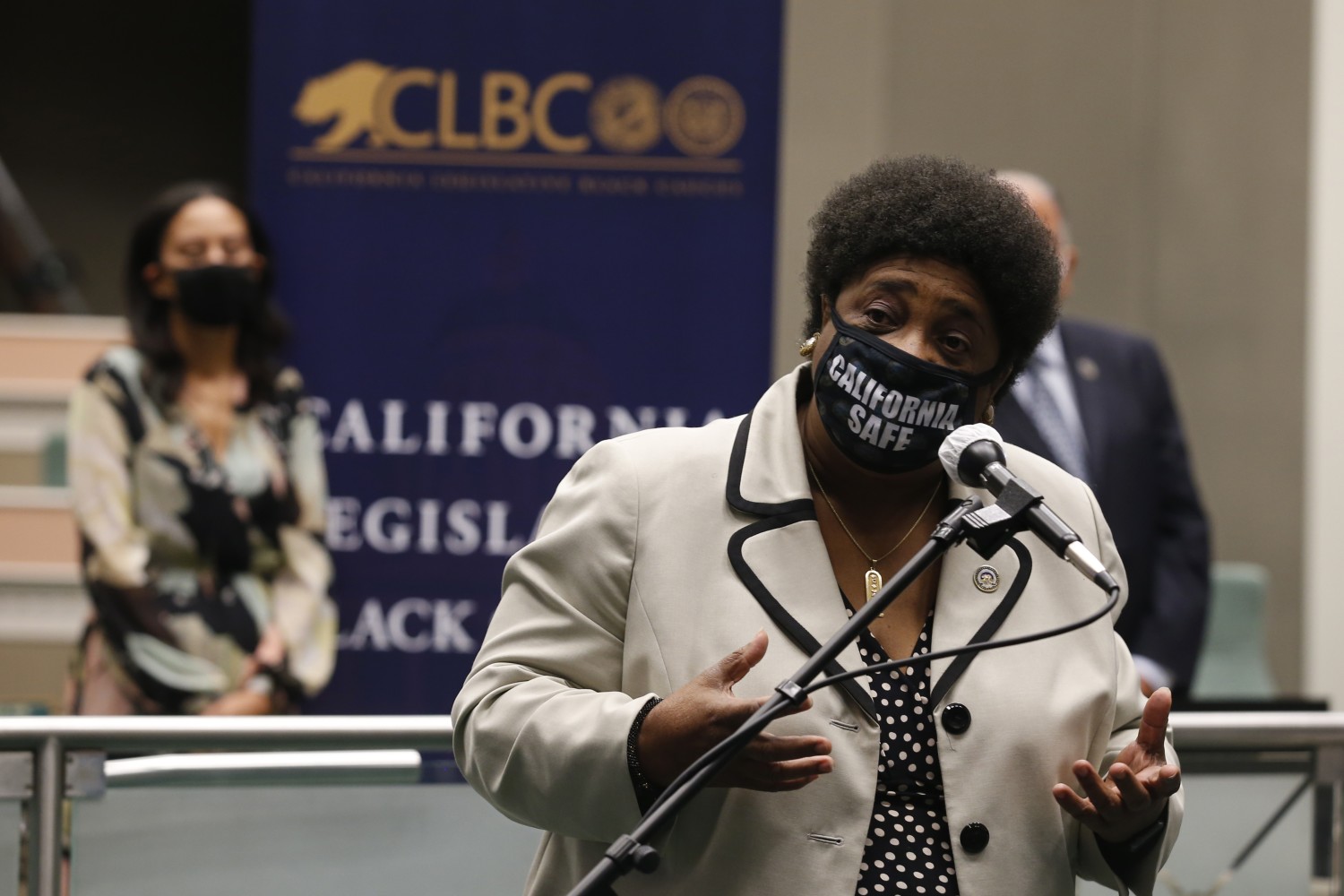 The grandchild of a man who never had the chance to cast a ballot because he died before the Voting Rights Act of 1965. The daughter of parents who felt so strongly about voting that they allowed their Los Angeles home to be used as a polling place.

It’s impossible to listen to Assemblywoman Shirley Weber tell her life story and not be grateful that Gov. Gavin Newsom picked her to be the first Black woman to serve as secretary of state in California.

Unfortunately, it’s also impossible not to see her historic appointment as some sort of a consolation prize for the U.S. Senate seat that Black women lost.

Long before Newsom tapped Weber to be secretary of state, the San Diego Democrat was one of the main people needling him to pick a Black woman to replace Kamala Harris in the U.S. Senate, preferably with Rep. Barbara Lee or Rep. Karen Bass. Weber also warned the governor what might happen if he didn’t.

“Keep the seat” was the hashtag-driven rallying cry echoed by members of California’s Legislative Black Caucus, which Weber leads, and by a coalition of Black politicians, lobbyists and activists from across the United States.

“If you don’t have a seat at the table,” she told me earlier this month, “then you’re on the menu.”

It didn’t take long for Black Twitter to erupt in righteous fury.

A fearless advocate with unimpeachable integrity and moral clarity — there’s no one better suited for the job of Secretary of State than @AsmShirleyWeber.

With her, CA will continue to be a model for the nation in expanding democratic participation and access to the ballot box. pic.twitter.com/fcpuZuYQ8e

“After everything that Black women did for democracy in the 2020 election AND all that we are STILL doing for the Georgia Runoff,” tweeted Jotaka Eaddy, a Silicon Valley tech executive and strategist. “I’m not sure how anyone thinks that a US Senate without the voice of a Black woman is okay.”

“If I could sum up in one phrase what Black women are thinking about not having representation in the United States Senate…. ‘UNTIL YOU DO RIGHT BY ME…’” tweeted Dallas Fowler, president and board chair of the Museum of African American Art in South L.A.

“Gavin Newsom didn’t #keeptheseat. So now, Black women are not in the U.S. Senate,” tweeted author and activist Brittney C. Cooper. “#BlackWomenWontForget when you make your presidential run, Newsom.”

At issue is not so much Padilla or the 40% of California’s residents who are Latino and have been waiting for far too long for a Latino to represent them in the U.S. Senate. The Los Angeles Democrat will make an excellent senator and California is lucky to have him.

As I’ve written before, I firmly believe we need both a Latino senator and a Black senator to solve this state’s many race-based inequities. I also firmly believe that California’s senior senator, Dianne Feinstein, should step down early to allow this to happen, but I digress.

No, the issue is that, when Harris becomes vice president in January, there won’t be a single Black woman in the U.S. Senate. That’s a statistic that can’t be said of Latinos. And that this loss of representation is happening months after Black voters, most of them women, delivered the White House to Democrats is particularly infuriating.

“With the swipe of a pen, one man, Gavin Newsom, has effectively set back Black women and really all women,” said Kimberly Ellis, director of San Francisco’s Department on the Status of Women.

Harris was only the second Black woman to serve in the U.S. Senate, after Carol Moseley Braun of Illinois. And with Harris becoming vice president, there are now only three Black women in California’s congressional delegation — all in the House.

“One thing that I know for sure is that Black women, not just in California, but across the country, will not forgive this,” added Ellis, a longtime progressive activist. “I think that many of us were already — and this will just add to that — reevaluating our relationship with the Democratic Party and with some of those who profess to be supporters and allies of ours. This decision will not help in that calculation.”

Kerman Maddox, a longtime political consultant who was involved with the #KeepTheSeat campaign, had similar thoughts, calling it “a terribly insensitive decision that will not be well received by African American voters in California and African American women nationwide.”

San Francisco Mayor London Breed described the appointment of Padilla rather than Lee or Bass as “a real blow” to the Black community.

“It’s really challenging to put it into words, but it was definitely a surprise,” she said at a news conference. “And it’s an unfortunate situation as we are trying to move this country forward and making sure that Black lives truly matter and that African Americans have a seat at the table.”

Some might call this sour grapes. Or misguided identity politics. Or, as one public relations professional put it, an inability to see Padilla’s historic appointment as a victory for “the interracial quest for more equitable representation.”

Whatever you call it, the Democratic Party should call it a problem. At best, it’s a short-lived one.

“One or two things could happen,” said Earl Ofari Hutchinson, president of the Los Angeles Urban Policy Roundtable. “One, it will be accepted (and) it will go away, no issue. Or it could build resentment, it could backfire and people will say, ‘Wait a minute. We’re not good enough for the Senate, but we’re good enough for secretary of state? What the heck is that?’ ”

The political fallout for Democrats could come in many forms and in many states.

Most likely, newly disillusioned Black voters in California could turn against Newsom, who is facing a possible recall election. And if he indeed does run for president someday, trust and believe this will come up as he tries to win over the crucial voting bloc of Black women.

Also likely, it will put more pressure on Harris and President-elect Joe Biden to make good on their campaign promises to Black voters and to ensure their administration is diverse. So far, Biden has appointed three Black women to his Cabinet, including Cecilia Rouse as chair of the Council of Economic Advisors, Linda Thomas-Greenfield as U.N. Ambassador and Marcia Fudge as secretary of the Department of Housing and Urban Development.

Far less likely, but still possible, is that Black voters in Georgia who haven’t already cast ballots will decide to stay home rather than support the Democratic Party in its quest to regain control of the U.S. Senate. Republican Sens. Kelly Loeffler and David Perdue must lose to the Rev. Raphael Warnock and Jon Ossoff, respectively, for that to happen.

“I’d bet the house on this,” Hutchinson said. “Over the next couple of weeks, we’re gonna hear that — definitely on social media and maybe even publicly — that, ‘Hey, we now have no representation in the Senate from a Black female. And we have (had) that for a while.’”

Earlier this month, I asked Weber what the backlash might be if Newsom decided against appointing a Lee or Bass to succeed Harris.

“Women,” she said after a moment, “will be very, very, very upset, and I would be most disappointed. Now what people do about it, I don’t know. And what he tries to do to compensate for that would be something he has to deal with.”