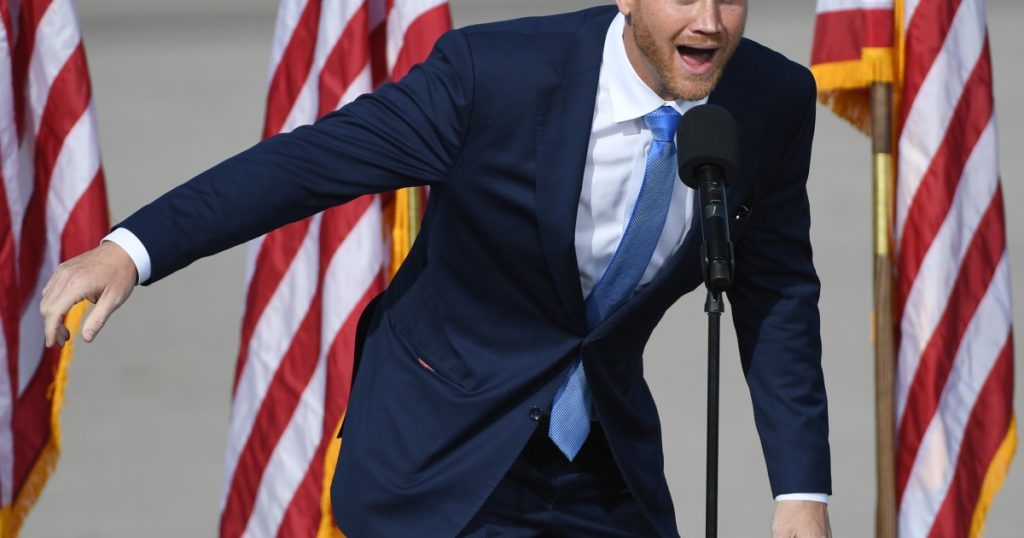 Seems “the three dirtiest jobs in the world are professional wrestling, politician and bull ridin’ ” — at least according to “Big Dan” Rodimer, who’s ready to saddle up and head to Washington so he can take on “the commies” and “kick some left-wing ass.”

Except, er, swaggering Big Dan is actually a Florida law school grad, by way of a New Jersey prep school, who just last November was running for Congress in Nevada as a soft-spoken family man. He spent 11 whole seconds riding a bull for his Texas ad — or so he claimed — which is just about the amount of time he spent in the Lone Star State before launching his bid for a congressional seat outside Dallas-Ft. Worth and acquiring a new-fangled Southern drawl.

Political reinvention is, of course, nothing new. Patricians become populists. Ivy Leaguers turn into wildcatters and roughnecks. Swaddled sons of fortune transform themselves into rough-hewn outdoorsmen.

But Rodimer’s makeover is so obvious, his buckaroo act so nakedly opportunistic, it’s thicker than the stuff carpeting the rodeo ring.

“Sounds a lot like somebody from outside Texas getting a consultant’s advice on how to run in Texas,” said Jim Henson, who heads the state politics project at Texas’ flagship university in Austin.

“Men in women’s bathrooms,” Rodimer growls as he moseys through the rodeo arena. “Boys in girls’ sports. Higher taxes, higher gas prices. They’re building a wall around D.C., but they’re not protecting our borders. They’re laughing at us. Now they’re going to try to take away our guns?”

If Rodimer didn’t already have a campaign slogan, “Make America Texas Again,” it could be “Leave No Right-Wing Campaign Trope Behind.”

The former entertainer — he went by plain old Dan Rodman as a professional wrestler — is one of 23 candidates running for a congressional seat vacated when the Republican incumbent, Ron Wright, died in February of COVID-19.

Rodimer is certainly the most audacious.

He says, with no evidence so far, he was urged into the contest by members of the Trump family. The former president, who endorsed Rodimer in his Nevada congressional race, has kept mum.

The contest is the first competitive special election of the Biden presidency and will provide a test of both Trump’s continued appeal and Democrats’ hopes of continuing their incremental improvement in Texas. The factors that have boosted Democrats in the state — support among Black and Latino voters, GOP defections in the suburbs — are very much in play. Trump easily won the district in 2016 but only narrowly beat Biden in November.

The folks who live there are like most Texans — which is to say as far removed from sod-busting and cattle-roping as the fresh veggie wrap at Arlington’s baseball stadium is from campfire pork and beans.

Few states, however, cling as proudly and boastfully to their mythologized past, which is how Rodimer (or, he now concedes, a body double) wound up astride a bucking bull by way of his Texas introduction.

The get-up is quite a change from his on-screen appearance in Nevada, where Rodimer — wearing a baby-blue Izod shirt — sat on a couch with his wife and five children and sought to explain a history of violence outside the wrestling ring.

The Associated Press said Florida court records and sheriff’s documents detailed three incidents from 2010 to 2013 in which Rodimer was accused of punching or throwing someone to the ground in disputes at nightclubs and restaurants. The AP also reported that Las Vegas police responded to two 911 calls in 2018 from Rodimer’s now-wife, alleging domestic violence.

In his defense, Rodimer said: “I have no convictions and no criminal record.” He spoke humbly, earnestly and, notably, sans accent.

Rodimer’s hot-tempered past has yet to become an issue in his latest congressional bid, though rivals have mockingly seized on his costumed candidacy. (Don’t mess with Texas!)

“Doesn’t take a bull to notice someone completely full of it,” tweeted Democratic hopeful Lydia Bean.

“As a wrestler he is fake, and as a candidate he is fake,” Matthew Langston, a strategist for the front-runner, Wright’s widow, Susan, told the Dallas Morning News.

The Houston Chronicle weighed in with an editorial suggesting Rodimer “was aiming for ‘Stone Cold’ Steve Austin” — the actor and retired pro wrestler — “but landed on Yosemite Sam.”

“Anyway,” the Chronicle scoffed, “we look forward to seeing his Tony Soprano impression during his inevitable run for office back in Jersey.”

Election handicappers are equally dubious of Rodimer’s chances in the May 1 election, in which all candidates will share the same ballot. If no one clears 50%, the two top finishers will advance to a runoff.

“There are some serious people in this race,” said Cal Jillson, who teaches political science at Southern Methodist University and lives not far from the congressional district. “Rodimer is not one of them.”

But at least he’s been good for some laughs. Just like a rodeo clown.