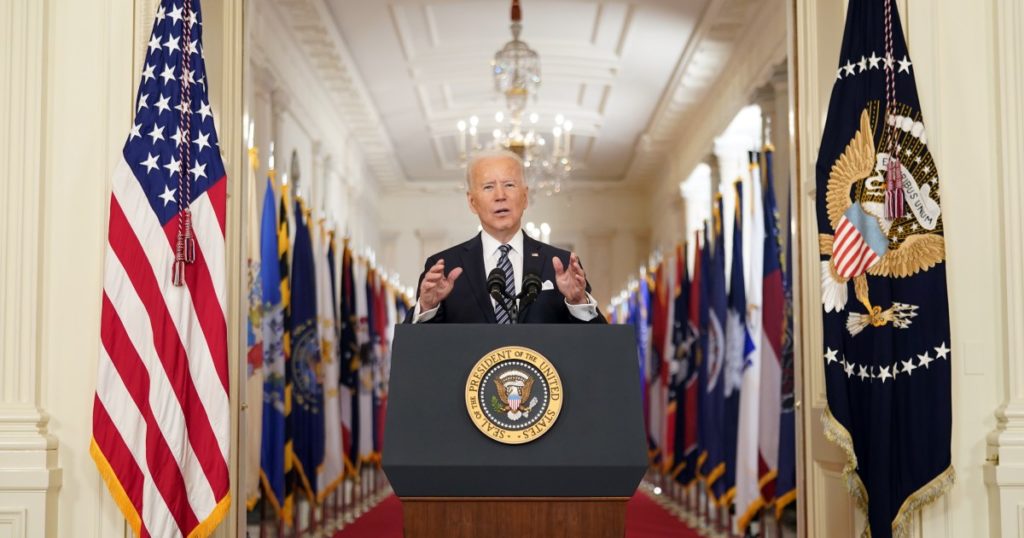 Aaron Elkins is a political independent with little use for Democrats or Republicans. He’s never been a fan of Donald Trump and couldn’t bring himself to support Joe Biden. So in November he voted for a third-party candidate he can’t even remember.

But 100 days into Biden’s administration, Elkins is largely pleased with the president’s performance.

It’s not so much what Biden has done: the massive COVID relief bill he pushed through Congress, the stepped-up federal response to the pandemic he’s overseen, or the gargantuan infrastructure bill he’s dangled before lawmakers.

Rather, it’s what the president hasn’t done: rage and howl and push the country to a state of nervous exhaustion.

“Pleasantly boring” is how Elkins described the budding Biden era, which, the 40-year-old insurance agent said, is exactly how politics should be for bystanders like himself. “It’s better than what we had the previous four years. Politics should not be a spectator sport.”

In 2020, Democrats presented a shiny array of more than two dozen candidates, but most voters settled for Biden, the well-worn alternative, in the primaries and then the general election. “Not great, but good enough” could have been his unofficial campaign slogan.

But if Biden fails to excite most voters, he doesn’t antagonize them either — not the way Trump or Hillary Clinton did — which is no small feat in this era of fierce partisan division.

It’s why he won Pueblo County, a traditional Democratic stronghold that Trump carried in 2016 in a surprise victory that underscored the political newcomer’s appeal to a broad swath of angry, disaffected Americans.

It’s also why national polls show a majority of Americans supporting Biden and his expansive agenda. His approval rating stands a few ticks above 50%; not flashy, but a level of backing Trump never achieved his whole time in office.

“I don’t think he’s a knock-it-out-of-the-park president,” said independent Ivan Valles, 44, a geographer for a land survey firm who voted for Biden after his preferred candidate, Andrew Yang, failed to win the Democratic nomination. “But at least he’s brought some stability, some normalcy, some dignity back to the office.”

Pueblo lies almost two hours south of Denver and a world away from the Colorado of picture postcards.

It is high desert — flat, brown, scrubby — with few natural attributes, save an abundance of sunshine that helps fuel a booming cannabis industry.

The city’s storied history was cast long ago, in the steel mills that made Pueblo an oasis of blue-collar opportunity. It was a brawny place where generations forged the raw materials that built railroads, bridges and skyscrapers, and in the process hoisted themselves up into the middle class.

Today, the city of roughly 115,000 is devoted to reinvention, after much of the steel production has ended and thousands of good-paying jobs have gone away, forever.

A gracefully landscaped riverwalk and expanded convention center speak to the city’s aspirations as a tourist destination, and several “creative” districts — chockablock with galleries, cafes and funky emporiums — offer refuge to the young and hip.

Politically, though, Pueblo and its worn neighborhoods of modest homes are more akin to Youngstown, Ohio, the forlorn buckle of the Rust Belt, than to Denver, Boulder or any of Colorado’s other booming liberal bastions.

The discontent that delivered much of the industrial Midwest to Trump — and put him in the White House four years ago — also helped achieve his narrow 2016 victory in Pueblo County. He won by just 390 votes out of nearly 79,000 cast — the first time a Republican had prevailed here since 1972, when President Nixon beat the liberal George McGovern in a nationwide landslide.

Trump told people “what they wanted to hear, whether he could do it or not, whether it was true or not,” including extravagant promises to rebuild the country’s manufacturing might and revitalize the shrinking steel industry, said Pueblo Mayor Nick Gradisar. (In his City Hall office, the mayor proudly displays a poster-size photo from 1961 of his father catching hot steel as it comes off a 10-inch roller.)

Things have improved some. The local mill is recalling workers after last year’s pandemic-related layoffs. But even with plans for a sizable expansion, the operation will employ nowhere near the 12,000 workers who labored in Pueblo’s steel industry at its height in the 1950s.

“People were willing to take a chance on [Trump] four years ago. Things weren’t going so good, so they thought they’d try something different,” said Gradisar, a Democrat. But in the end, he said, the former president proved to be a flimflam man who “put P.T. Barnum to shame.”

Still, Biden’s victory in Pueblo County was narrow, 50% to 48%, at the same time he carried Colorado by more than 13 percentage points. The disparity reflects how much the state has changed and how much Pueblo hasn’t.

While most of Colorado has moved decidedly leftward — especially the Denver suburbs, a onetime political battleground — Pueblo County is still home to a good number of moderate and conservative Democrats who feel the national party doesn’t always pay attention or have their best interests at heart.

Unlike most partisans, they don’t vote strictly along party lines, which makes them a rarity — not just in Colorado, but anywhere in the country.

When it comes to sizing up Biden’s first 100 days as president, Shirley Lemerond sounds like many of her fellow Democrats.

Asked whether the country is better off than it was under Trump, the 60-year-old paralegal responded with a burst of exuberant laughter, as if releasing four years of pent-up anxiety. “Oh, 100%,” she exclaimed. “Yes!”

“I don’t fear that we’re making enemies overseas,” Lemerond said as she paused outside Pueblo’s main post office. “I think he’s doing better with the COVID virus, he’s doing better getting us vaccinated, and I have confidence he can make the right decisions.”

Still, she allowed as to how Biden worries her with his sometimes clumsy way of speaking. “I know he’s a wise man,” Lemerond said, “but it does make him appear as though he’s not wise.”

Stephanie Kroeze, a 30-year-old real estate broker, has a different concern about a president she otherwise wholeheartedly supports. She appreciates the calm Biden has brought to the White House, especially after Trump’s pugnacity. But Kroeze is troubled by the massive debt the president has already piled up with nearly $2trillion in COVID-related spending.

“It brought short-term relief,” Kroeze said, “but we’re going to be paying for it for years to come.”

Other Democrats offered their own caveats and qualifications. Yes, they said, they’re quite glad Biden was elected. If only he were more charismatic. Or hadn’t announced plans to pull out of Afghanistan. Or weren’t so closed-minded when it comes to legalizing marijuana nationally.

That’s hardly the rapture expressed for Barack Obama or Bill Clinton early in their administrations.

Many Republicans, of course, take a far dimmer view.

Bill Wilcoxson, who owns the Buick GMC dealership in town, wears his USA protective mask upside down — symbolizing, the 68-year-old conservative said, the distress the country is in since Biden took office.

Derek Robinson, 26, who voted to reelect Trump, said Biden is proving every bit as bad as he feared. “He wants to raise taxes,” said Robinson, who works installing highway signs. “The way Democrats always do.”

Eric Yoxey, 58, is a conservative Republican who owns a pharmacy in Pueblo’s Mesa Junction neighborhood, on the hillside overlooking the Arkansas River. He echoed concerns about Biden’s gusher of spending — “too much money being pushed too fast” — and criticized the president’s handling of the immigration crisis on the border with Mexico. “He’s made a bad thing worse,” Yoxey said.

But overall, he gives Biden a B for his performance so far.

“He’s done a great job” handling the COVID-19 pandemic and listening to medical and scientific experts rather than winging it or, worse, downplaying the disease the way Trump did, Yoxey said. “He’s also on the right track trying to pull people together, to bring us together as a nation.”

Trump was willing to tear the country apart to win a second term, he said. Elkins’ hope is that Biden lowers the political heat and lessens the unease many Americans felt — about economic displacement, about the country’s role in the world, about exactly whose interests Washington is serving — which all played large parts in Trump’s election and in the unrelenting turmoil that followed.

“Decisions made out of panic or fear are rarely good ones,” Elkins said, “as we saw.”

But that’s looking down the road. For now, good enough seems good enough.