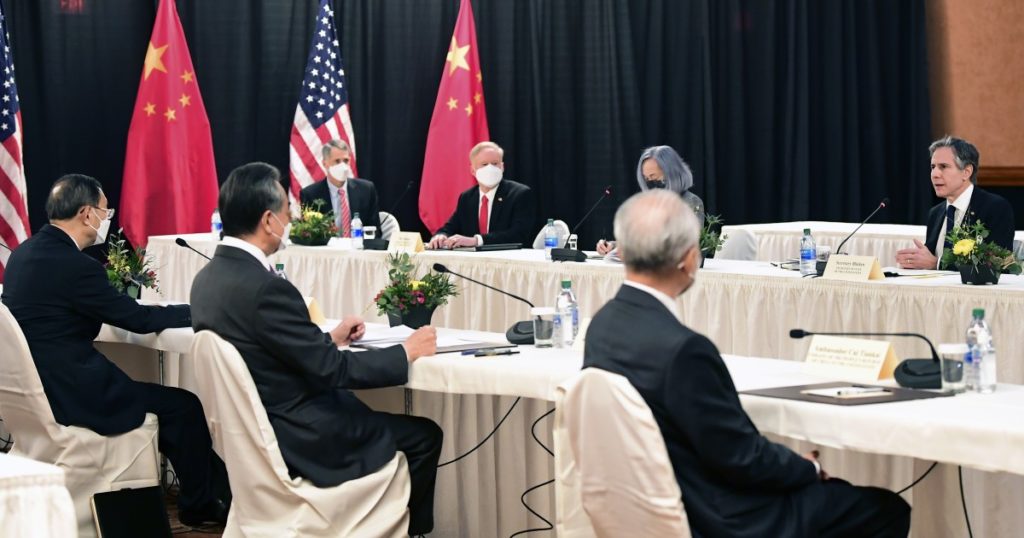 President Biden is attempting to reconfigure the frayed U.S. relationship with China to be both competitive and cooperative. His administration is off to a rocky start.

In two days of talks concluding Friday in Anchorage, two of Biden’s most senior officials have traded barbs with their Chinese counterparts and failed to show any signs of agreement on numerous outstanding issues, from trade to human rights.

Still, despite the frigid and sometimes rambunctious tone of the first face-to-face meetings of the Biden administration with China, the president said he was satisfied with the proceedings thus far.

“I’m very proud of the secretary of State,” Biden said at the White House on Friday as he departed for Atlanta.

The scene in Alaska that Biden was alluding to was quite a departure from the usual polite, anodyne opening meet-and-greet. Instead, the two countries’ representatives launched into mutual recriminations in surprisingly undiplomatic exchanges.

Secretary of State Antony Blinken quickly and pointedly listed several of Beijing’s egregious policies, including China’s harsh repression of Muslim Uyghurs, cyber attacks on the U.S. and aggression against Taiwan, actions that “threaten the rules-based order that maintains global stability.

“That’s why they’re not merely internal matters and why we feel an obligation to raise these issues here today,” Blinken said at the start of talks on Thursday.

The head of the Chinese delegation, Communist Party foreign policy chief Yang Jiechi, launched into a long rebuttal, extolling the virtues of what he called Chinese-style democracy and respect for human rights and dismissing “what is advocated by a small number of countries of the so-called ‘rules-based’ international order.”

Yang attacked the United States’ own human rights record and its domestic turmoil over racism, violence and other problems. He claimed “polls” showed that Americans have many doubts about their democracy, while Chinese leaders remain hugely popular with their nation’s people. And he called on the United States to stop attempting to export its version of democracy.

“The challenges facing the United States in human rights are deep-seated,” Yang said. “They did not just emerge over the past four years, such as Black Lives Matter. It did not come up only recently. So we do hope that for our two countries, it’s important that we manage our respective affairs well instead of deflecting the blame on somebody else in this world.”

Foreign Minister Wang Yi followed in similar fashion, attacking the U.S. for imposing new sanctions on Chinese officials on the eve of the Anchorage meeting, as punishment for infringing on the rights of Hong Kong citizens.

Blinken shot back that unlike China, the U.S. “acknowledges our imperfections” and confronts “those challenges openly, publicly, transparently, not trying to ignore them, not trying to pretend they don’t exist, not trying to sweep them under a rug.”

As the exchanges grew more heated, the Chinese officials drummed their fingers on the table while the U.S. delegates furiously passed scribbled messages to one another.

Several times, organizational staff tried to pull reporters from the meeting, only to be ordered by the American or Chinese leaders to remain as they yet again responded to the opposing side’s comments.

Later, the U.S. delegation took the unusual step of criticizing the Chinese officials for violating protocol by speaking long beyond the agreed-to two-minute statements. The Chinese delegation “seems to have arrived intent on grandstanding, focused on public theatrics and dramatics over substance,” a senior Biden administration official said on condition of anonymity in keeping with bureaucratic rules.

Talks resumed Thursday night and were scheduled to continue Friday. These sessions were closed to the press, and U.S. officials described them as “substantive and serious.”

Under President Trump, relations between Washington and Beijing plummeted. Trump blamed China for spreading the coronavirus worldwide, hit Chinese products with high tariffs and imposed economic sanctions on a wide range of Chinese individuals and companies, as punishment for trading with Iran, helping North Korea and mistreating its minorities.

In its final days, the Trump administration labeled Chinese repression of the Uyghurs a genocide. The Biden administration has concurred with that assessment but also has expressed confidence that it could confront China with “stiff competition” while also cooperating on climate change and global health crises.