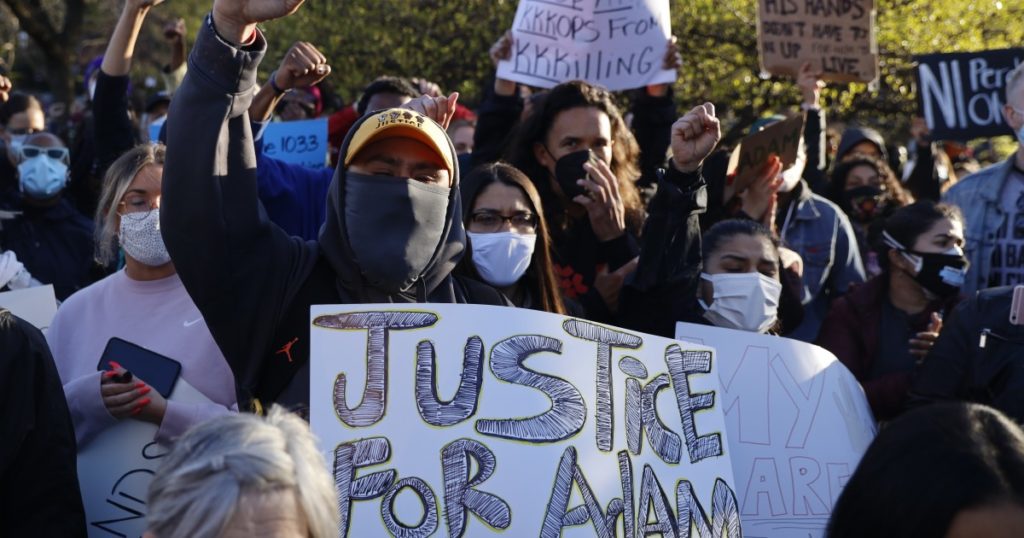 Adam Toledo’s mother stood in front of a makeshift memorial in an alley where her 13-year-old son was fatally shot by a Chicago police officer.

Elizabeth Toledo, 44, wore dark glasses and didn’t speak to the half-dozen onlookers. But Toledo, who lives a few blocks away in the neighborhood of La Villita, Little Village, has said through her attorney that she feels judged by the community since her son’s death last month.

So she surveyed the candles, bouquets and signs calling for justice on Saturday, cried quietly, and left.

A steady stream of mourners visited the memorial this weekend, some pausing to pray. Most were Latino, their roots Mexican, Puerto Rican and Central American. Many said the youth was a victim of police brutality. But some also observed that he was out in the early hours of the morning with a member of the gangs who terrorize them.

“I see both sides: It’s tragic for the officer and for the young man,” said Elsie Franqui, 45, who brought her 12-year-old son and 14-year-old nephew to the memorial Saturday with Viva Honduras masks (she’s Puerto Rican, her husband Honduran) and a homemade votive candle bearing Adam’s photo.

Protests in Chicago over the weekend remained largely peaceful following the release of police body-cam video Thursday. The video and other footage showed Officer Eric Stillman, 34, shooting the 13-year-old Mexican American less than a second after the boy tossed what appeared to be a handgun, turned toward the white officer and began raising his hands on March 29.

At briefings after the shooting, Lightfoot and other officials condemned street gangs, even though Chicago police had not confirmed that Adam belonged to a gang and a police report said the incident was not gang-related. Some officials also said the young victim shouldn’t have been armed and out at 2:30 a.m.

Franqui said her eldest son managed to leave a gang. Now 27 years old, he had moved out of the neighborhood and found work. That’s why she brought the younger boys to see Adam’s memorial. “I want them to see how quickly they can get lost in the streets,” she said.

Franqui said she watched the graphic video up until the point at which Adam was shot. She couldn’t stand to see more. The boys had not seen it.

At the march in the mayor’s Logan Square neighborhood about six miles north of Little Village, some carried Mexican flags and handmade signs that said “He was 13. He was unarmed,” and “Adam Toledo was murdered by a criminal gang named the Chicago police department.”

Jen Dominguez, 24, a Mexican American lab worker who wore a Virgin of Guadalupe sweatshirt, said she had not attended protests against police brutality in the past. But this time, she said, she and a friend felt compelled after watching the video because “We consider all Latinos family. That was one of mine.”

“Once I saw that video, I literally started crying because it could have been any of us,” Dominguez said.

“It could have been any one of my students,” said her friend, Sara Santos, 24, an eighth-grade Chicago public schools math teacher. “I don’t think there’s enough training for cops, especially white cops dealing with Black and brown kids. They’re acting out of fear.”

Fernando Serrano, 48, who rode his bike from his nearby apartment to watch the protest, didn’t see police as the only problem. Serrano said that Adam “clearly had his hands up” in the video and that the officer, a former Marine, appeared “trained to kill.” But Serrano has childhood friends on the police force and said he also thought, “It’s a tough job.

“A 13-year-old should not be on the street at 2:30 a.m. with a gun,” said Serrano, 48, a Puerto Rican-born father of three who works at Home Depot, grew up in Logan Square and married a Mexican woman from Little Village. “It could happen again tonight. There are parents worse off.”

Little Village is a Mexican American mecca of the Midwest, complete with a gate welcoming visitors to its main artery, 26th Street, a block from where Adam was shot to death. Its 75,000 residents are 80% Mexican and Mexican American.

Over the weekend, vendors flocked to the boulevard to sell serape blankets and embroidered dresses out of pickups. The bells of palleta carts rang as they passed elote stands and trucks heaped with mangos. Some cars sported “Back the Badge” stickers. Some children here dream of becoming police. Even Adam did, according to his mother, who has also said the seventh-grader still played with Hot Wheels and Legos.

Standing at the memorial, Sonia Revollar, a cook and mother of three, said she has tried to keep her kids off the streets, but her 23-year-old son, now under house arrest, faces charges because police say they caught him with a gun after he served time on felony drug charges.

Revollar, 40, migrated to the U.S. 27 years ago from Guerrero, Mexico, and is in the process of getting U.S. residency. She said others in the neighborhood without legal status are afraid to complain about being harassed by police.

“We don’t want more of our children to die,” Revollar said in Spanish. “We need police, not assassins.”

Daniel Carrasco, 30, grew up in Little Village and now works with a youth intervention program in Chicago and California. His parents were immigrants, nortenos from northern Mexico, he said. He attended high school next to the alley where Adam was shot.

He snuck out late at night, wore baggy clothes, was beat up by gang members and was often stopped by police even though he wasn’t in a gang, he added.

“I’ve never felt more in danger than when I’ve come across cops in dark streets in Little Village,” he said, and even when he was on his way home from school or baseball practice, “I’d get stopped and frisked, slammed up on cars.”

“There’s a bigger system at play here,” Carrasco said as he prepared to leave the memorial with his 1-year-old son. “Why are our kids joining gangs? Your mistake shouldn’t dictate whether you live or die. I see him in a lot of the kids I’ve worked with and helped.”

Latinos were 1.2 more times likely than whites to be killed by police in Chicago and its western suburbs from 2013 to 2017, Blacks 6.5 times more likely, according to a Harvard study released last year.

“There’s a long record of police brutality, abuse, racial profiling and other kinds of injustice,” in Chicago’s Latino neighborhoods, said Lilia Fernández, associate professor of history and Latino studies at Rutgers University and author of “Brown in the Windy City: Mexicans and Puerto Ricans in Postwar Chicago.”

Yet last year, 67% of Latinos surveyed in Chicago said police made neighborhoods safer, compared with 47% of Blacks. Part of the reason for the disparity: Black Chicagoans have far more encounters with police, said Wesley G. Skogan, professor emeritus of political science at Northwestern University. Black Chicago residents were eight times more likely to be stopped and frisked than white residents; Latinos twice as likely from 2016 to 2019, he said.

“While people talk a lot in Chicago about people of color, it’s simply not useful when talking either about crime, victimization or relationships with the police,” Skogan said. “When it comes to Blacks and Hispanics, they live in entirely different planets.”

“As a teenager I was always outside, walking through the alleys because sometimes that’s a shortcut. Police would stop me and rough me up,” he said while eating a mangonada Saturday outside Azucar, a Little Village Mexican ice cream shop.

In 2014, Almanza moved back to the neighborhood to attend graduate school for public administration and volunteer at a local community development group, UNITÉ. He has been protesting to redirect policing funds to community groups. After the shooting, he was disappointed to see comments from locals on social media and from a local alderman slamming Adam instead of police.

Almanza said he has friends and relatives on the police force who have told him they treat people in wealthier neighborhoods with more respect. Although the officer who shot Adam was a fellow Marine, Almanza said, what he saw in the video was, “He didn’t give him a chance to comply.”

He said he was encouraged by the turnout at recent protests by both Latino and Black Lives Matter groups. His group worked with Black activists to organize a Sunday afternoon protest for Black and Latino victims of police shootings that drew about a hundred people.

“A lot of us were first-, second-generation. Our parents were coming into a new country and didn’t know what to do. We do,” he said. “We know how to organize for transformational policy. It’s time.”

The Rev. Paco Amador, of local New Life Centers church, lives a few blocks away from the site of the shooting with sons Johnny, 12, and Daniel, 14. On Saturday, he walked with them to the memorial and prayed before watching the graphic video together.

Amador scanned his sons’ faces as they registered a flurry of emotions: “Deep sadness, shock, reverence and pain.”

“Most of the time, my kids have a lot to say about everything,” he said afterward. “This time they just sat quiet.”

Amador, 51, is chilango, Mexican slang for those from Mexico City. But Little Village is his home. Neighbors wave as he walks past, calling out pastor. Amador said he helped organize a peace walk Sunday and is working with local youth through the church food pantry, among the city’s largest, because he doesn’t want to pawn off responsibility on others, including the police. That would allow him to absolve himself of blame, he said, which he can’t do.

“There’s elements that clearly need to be confronted: policing, Americans’ love of guns, gangs,” Amador said. “It’s easy and lazy to blame. Really, all of us failed. We say in Little Village that we’re stronger together. If we all can find our little part where we can change, that makes everything better.”

About 300 people filled the alley where Adam was shot ahead of the peace walk Sunday evening, spilling into streets blocked by dozens of police. Mariachis played, Aztec dancers performed and Amador blessed the crowd, which included Adam’s mother and other relatives.

“God bless you with discomfort before easy answers, half truths and superficial relationships so that you can live with depth of heart,” the pastor said in Spanish, which a volunteer translated.

Then the crowd slowly processed past police officers stationed on corners.