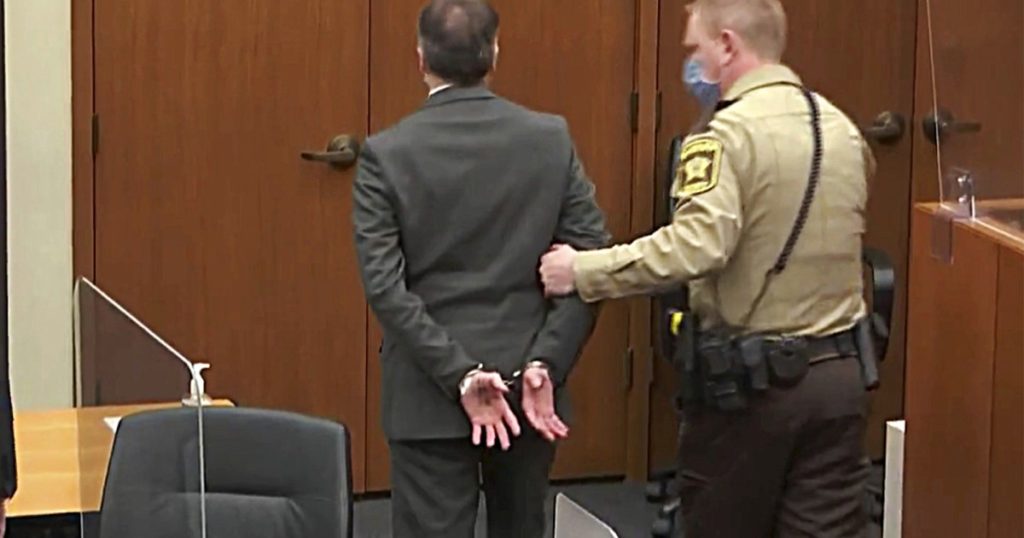 Shortly before jurors returned to the courtroom Tuesday, George Floyd’s girlfriend, Courtney Ross, was asked by TV reporters what it would mean to get convictions on on all three charges against former Minneapolis police officer Derek Chauvin.

“It’ll mean change,” she said through nervous tears. And that, maybe we, the people, “can start to believe again in justice.”

After deliberating for less than 12 hours, the jury found Chauvin guilty of manslaughter, second-degree murder and third-degree murder for using his knee to pin a terrified Floyd to the concrete until he stopped breathing.

Chauvin could spend up to 40 years in prison. His sentencing will come later, but for now, it was enormously cathartic to sit on my couch and watch him blink in confusion before being led out of the courtroom in handcuffs.

“Amen,” is what my mother said, nodding in that way old Black women do.

Indeed, justice was served, for once. But once isn’t good enough anymore.

Cops like Chauvin, who are so arrogant they think they have a right to intimidate, assault and kill Black and Latino people with impunity, can’t continue to be so common in American policing. Nor can what happened to Chauvin, who was convicted for breaking the same laws that those of us without a badge must follow, continue to be the exception.

President Biden accurately described the outcome in Minneapolis as “much too rare” in delivering what was essentially “basic accountability” to the public.

Or as Chris Stewart, an attorney for the Floyd family, put it during a news conference: “The whole world should not have to rally to get justice for one man.”

The family’s other attorney, Ben Crump, went on to cast what happened Tuesday as a “precedent” for overcoming systemic oppression. And, in a phone call with Floyd’s relatives, Vice President Kamala Harris promised that “we’re going to make sure his legacy is intact, and that history will look back at this moment and know that it was an inflection moment.”

I’d like to believe that. But I also know that, if we’re not careful, America will easily slip back into the status quo, with millions upon millions of dollars going to law enforcement agencies to enable more officers like Chauvin to intimidate and brutalize communities of color.

Enacting the George Floyd Justice in Policing Act would certainly help avoid that. Harris, who helped introduce the legislation when she was a senator, has called it “a start.” It would ban chokeholds, end “qualified immunity” and make it easier to hold cops accountable by tracking those with a history of misconduct. It passed the House in March, but faces long odds in the Senate.

Still, even if it passes, it would do nothing to slow a rising national homicide rate — and the excuse that uptick provides to rely on the same old, flawed crime suppression tactics, rather than reimagine policing, either by shrinking departments, rebuilding them or abolishing them altogether.

Last year, fatal shootings jumped 46% across California, starting with the COVID-19 pandemic. It’s a trend in mostly Black and brown communities that played out in other states as well — and has continued well into 2021.

It’s not hard to imagine police chiefs and sheriffs lobbying for even more money, arguing they need to add officers and deputies to catch more gun-toting criminals. It’s also not hard to imagine a majority of Americans demanding the same, out of fear, perhaps, or merely out of habit.

After all, as I wrote earlier this week, nearly 60% of Americans said they’d rather fully fund the police departments in their communities than shift some of that money to community programs, according to a recent Ipos poll.

To one day be able to truly look back at Chauvin’s conviction as a “precedent,” more people will need to let go of the idea that more cops equal more safety. That’s just not true, especially in communities of color, which for decades have borne the brunt of over-policing.
In reality, more cops equal more George Floyds, more Daunte Wrights and more Adam Toledos.

Fernando Rejón, executive director of the Urban Peace Institute, is right when he says we should be building an ecosystem of community-based alternatives to law enforcement.

That includes gang intervention, for which L.A. Mayor Eric Garcetti has proposed spending additional money this year. And it includes programs such as TURN, or Therapeutic Unarmed Response for Neighborhoods, which will, according to Garcetti, enlist social workers and mental health experts to respond to some calls now answered by the Los Angeles Police Department.

The goal of both is to reduce opportunities for gun violence and police brutality.

“If you want sustainable, longer term safety, you have to create new systems,” Rejón said. “That’s what we’re trying to do.”

He blamed the spike in homicides on trauma and economic fallout from the pandemic, noting that the neighborhoods where there have been the most shootings are the same neighborhoods where the most people have died from COVID-19. It also didn’t help that many outreach workers and case managers were sidelined, trying to follow public health guidance for social distancing.

As we emerge from the pandemic, new thinking is a must. So is funding.

For example, investment in gang intervention in California has remained largely flat for years. Meanwhile, police budgets have swelled at a time when crime has largely remained at low levels.

“I think part of why the funding for intervention has not gone up for several years is because we were successful,” said Paul Carrillo, the community violence initiative director at Giffords Law Center to Prevent Gun Violence.

Now, he and several others are pushing Gov. Gavin Newsom to provide more than the $9 million he earmarked in January for the California Violence Intervention and Prevention program, which supports programs across the state.

Meanwhile, many community-based emergency response programs, such as Garcetti’s TURN, are being funded at the local level. However, a bill from California Sen. Sydney Kamlager (D-Los Angeles) would create a state-funded grant initiative known as the CRISES Act, giving such programs that are being created in cities throughout the state a much-needed lift.

Harris, speaking alongside Biden on Tuesday, acknowledged what should be plain to everyone by now. That “Black Americans and Black men in particular have been treated throughout the course of our history as less than human.”

Sometimes that means we must stop investing in old, broken systems and start creating and investing in new ones.