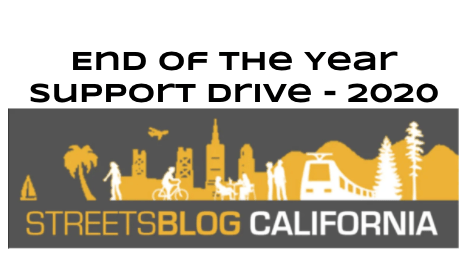 We’re about 1/3 of the way through our end of year Support Drive, and so far it has been a mixed success. While we’re short on reaching our goal, with just over $7,500 raised out of a $50,000 goal, we have received donations from over eighty donors and are on track to be close to our best-ever total of $25,000. So we wanted to take a moment both to thank everyone who has already donated to Streetsblog California, and to encourage anyone who is still considering a donation to make their tax-deductible pledge before the end of the year.

In a letter to subscribers, Melanie Curry offered one example of how Streetsblog California has made an impact this year that I’d like to share with you.

Streetsblog California’s coverage of the California Transportation Commission has been unique in shining a light on the activities of this state agency. Not only is the Commission intimately involved in decisions about individual projects – choosing them, allocating money, granting or denying extensions – it oversees the guidelines that shape those programs and define what projects are eligible for funding. This is important stuff, but it can be hard to track, in part because these meetings go on for two days and take place frequently.

For many years, most of the Commissioners were representatives of business, real estate, and labor, and they favored building more and wider freeways to solve most of California’s transportation troubles. Streetsblog California began quoting Commissioners’ comments, letting them reveal where their interests lay; we covered attempts by community advocates to get a wider, more diverse group of people on the Commission. We wrote about the work to get the CTC and the Air Resources Board to find common ground and work together, instead of at loggerheads and with opposing goals.

We followed along as, over time, the California Transportation Commission began to change. With a new governor, new appointees were brought on board, including people who work as advocates for clean air and equitable transportation. Now, CTC members and staff are beginning to look for ways to incorporate racial equity principles within the organization and its funding decisions. Commissioners are openly discussing the climate impacts of focusing transportation investments in ways that encourage single-occupant vehicle use.

We’re not claiming that Streetsblog California is responsible for bringing about any of these important changes. We do know that our coverage has been useful to change agents by creating a public-facing record of what happens at these meetings, and of who says what to whom. And Streetsblog California is still the only media outlet that regularly reports on this powerful commission, beyond the occasional press releases that local news outlets reprint.

The question is, how will these changes at the top levels translate into the changes we need to see on the streets and highways of our state? Streetsblog California plans to keep asking, to continue watching, and to keep informing our readers.

This is only one example of the ways Streetsblog California brings important information to our readers, and to the state. As California continues to change, to adapt to new realities forced on us by a pandemic and climate change, Streetsblog California will continue to shine a light on what, where, and how transportation is talked about, funded, and supported.

We can’t do our job without your support.