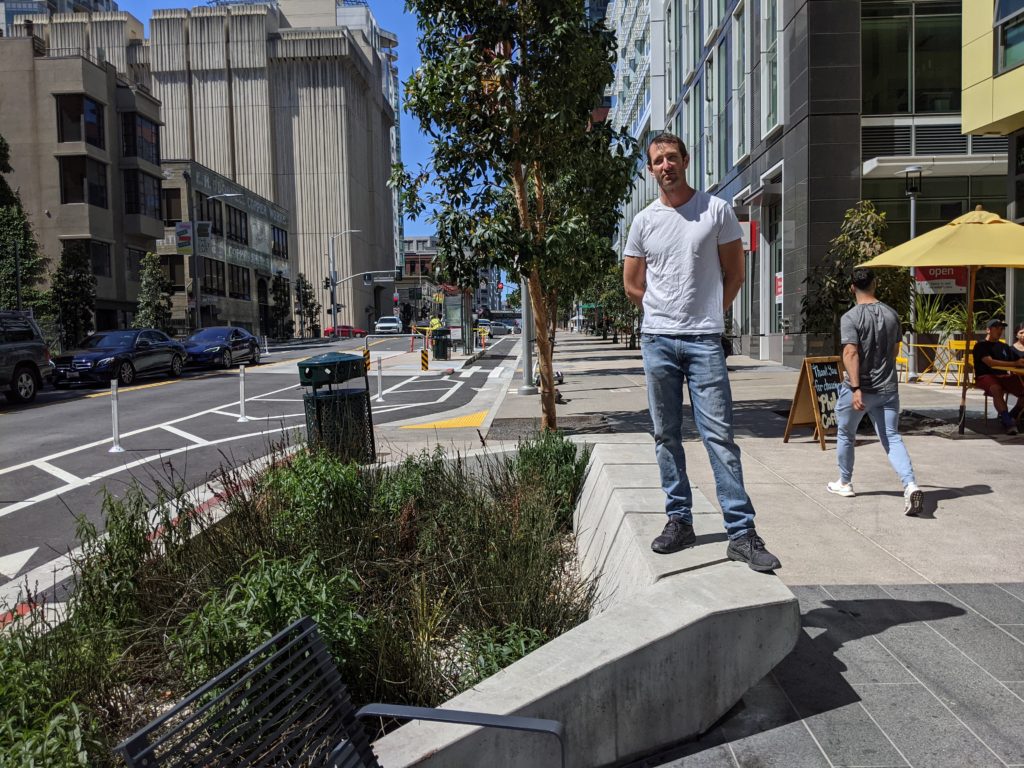 Ten years of planning, designing, and pushing for a more bike and pedestrian friendly Folsom Street came to fruition last April, with the completion of a major project to add bulb outs, protected bike lanes, bus boarding islands, and rain gardens to the street in the Rincon Hill neighborhood.

“I wanted to make sure you were aware that Folsom St, between the Embarcadero and 2nd St, is FINALLY finishing up construction – only a few years behind schedule. I led the design of this project while I was at the City and I’m very excited to see it finishing, because it is the most radical prioritization of people over cars in SF – protected bikeways, all parking removed, every signal has a scramble phase, super wide sidewalks and crosswalks, transit boarding islands, etc etc etc.,” wrote Greg Riessen, formerly of San Francisco planning and SFMTA, in an email last spring. “Tragically there likely will be no ribbon cutting celebration due to the lockdown. But if you’d like I would be honored to show you all the amazing features on this corridor. Let me know if you’d like to walk the street with me sometime.”

With two jabs in the arm and the Bay Area’s COVID crisis subsiding, Streetsblog finally got to take that bike ride and walk of the “Folsom Streetscape Improvement Project” for an editorial “ribbon cutting” of sorts.

First, some history: the section of Folsom Riessen is talking about was occupied by the old Embarcadero freeway, thankfully torn down after the 1989 Loma Prieta Earthquake. The area was upzoned and made residential, so Riessen and his team were left with a more-or-less blank slate.

Early designs were to keep two lanes in each direction plus parking. But with few local residents to push back on street parking, he decided to go all in and really transform the street into a bike and pedestrian haven. He had the backing of his bosses who told him to “Just go for it.” That meant widened sidewalk, widened crosswalks, protected bike lanes on both sides of the street, eliminating a traffic lane in each direction, and rather than street parking to have loading zones only.

This satisfied the developers. “We had a four-lane street,” to work with, he explained, saying that he was also put in charge of making the California Environmental Quality Act (CEQA) determination of whether or not lane eliminations would impact “levels of service,” meaning would the lane eliminations slow traffic. To Riessen, slowing down traffic is a feature, not a bug; since it was his job to do with CEQA determination, he determined that levels of service were not affected (and nobody checked him on it). And when one developer complained there wasn’t enough parking, he simply responded that they’re not “eliminating” parking, they’re just “modifying” it.

As seen above, there was only one block where he wasn’t able to completely eliminate parking, and that was next to the temporary Transbay Terminal site, but that he hopes will also get eliminated when the block is developed.

He also decided to go for parking-protected bike lanes in the designs (technically, loading zone protected) at a time when the city didn’t really have any, and was just phasing in the concept on JFK drive in Golden Gate Park. He said many at the city were convinced motorists, habituated to always parking next to the curb, would never figure it out. But, as evident by the tour, in reality most drivers figured out how to park properly. The design made for good, safe cycling. “I ride with my kid here,” said Riessen.

He also was determined to make the neighborhood a place where people linger, with lots of comfortable benches integrated into the streetscape (note the concrete benches along the rain gardens too, as seen in the lead image) and retail at ground level. “All buildings have a a wide sidewalk.”

The cornerstone of the project, to Riessen, is a public park scrunched between buildings that, in times past, would have been wasted as an alley cut-through for cars or a loading zone to make up for a lack of on-street loading.

Of course, one of the features that was tacked on to this project is the direct connection to the new two-way protected bike lane on the Embarcadero, so cyclists can ride safely directly through this new neighborhood to the ferry building.

Riessen loves the new two-way treatment on the Embarcadero, but says it needs extended.

And so do his treatments on Folsom, all the way to Cesar Chavez, opined Riessen.

Meanwhile, there are still a few more improvements on the way, such as an additional park planned for the area under the bus ramps to the Salesforce Transit Center.

“Advocates can make great things happen only through long hard work – but bureaucrats can make them happen much faster when they recognize and seize key opportunities,” said Riessen of the results.