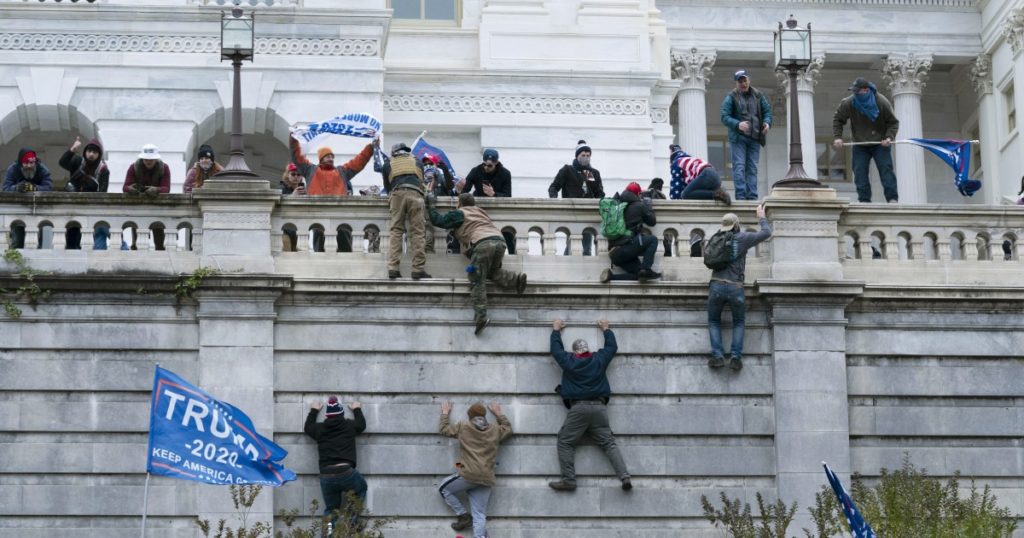 A Capitol besieged by mobs and an American president inciting insurrection was a propaganda gift for U.S. adversaries, but it was yet another troubling moment for democracies navigating the rising perils of a changing world order.

Democracy is not in danger of extinction — Congress’ repudiations of Trump’s bid to cling to power underscored the resilience of the U.S. government — but the tear gas and rage Wednesday spurred concerns from Berlin to Paris to the capitals of Latin America about what lies ahead in an age when time-tested beliefs and alliances are being challenged and undone.

“It’s extremely disturbing to see the siege against the pinnacle of democracy in the United States,” said Peter Beyer, the German government’s coordinator for trans-Atlantic affairs. “Democracy will win; I’m sure about that…. But we’ve seen: It can come under attack and it is vulnerable.”

That vulnerability extends well beyond U.S. borders: China is ascendant while other authoritarian and populist governments are further consolidating power. Globalization and immigration are under siege — and the American Century is a fading echo as the notion of U.S. exceptionalism has often devolved into parody. The pandemic and its exposure of social and economic inequality across continents has deepened a sense of global malaise.

Threats to democracy are growing as veneers have been shattered and strongmen maneuver, never to relinquish their armies and palaces. Think of Russian President Vladimir Putin or Venezuelan President Nicolás Maduro, who critics say have defied democracy to extend their personal dominion. Many viewed the melee in the U.S. Capitol as a foreboding message.

Nations from Latin America to Europe to Asia are asking: Can a bruised United States now reassert its global standing as Trump decamps to the golf links? Or do recent events portend a protracted decline for a hobbled superpower still seen by many as a model, however flawed, of democracy? And the anxious question in many capitals is: Can it happen here?

“My phone has done nothing but blow up with questions and expressions of horror from Latin American politicians, business leaders and everyday people who can’t believe this happened in the United States,” said Brian Winter, editor in chief of Americas Quarterly magazine. “They fear if we’re having these kinds of problems it will embolden the authoritarians in their midst.”

The concern is especially pronounced in Brazil, Latin America’s most populous nation, where President Jair Bolsonaro, a right-wing populist, has been the region’s chief cheerleader for Trump.

Brazilians “see shadows of what is happening in their own country, where Bolsonaro has imitated Trump at every step,” said Winter, who added that some Brazilians watching recent events in Washington wondered: “Is that going to happen to us? But only worse, because we don’t have the institutional strength that Americans do?”

In Europe, amid widespread trepidation about the rise of right-wing populism in nations including Hungary, Poland and Italy, the recent spectacle in Washington and the underlying polarization in the U.S. body politic have yielded apprehension. For all its many faults — and catastrophic debacles in Vietnam, Iraq and elsewhere — the United States has remained for many a pillar in a precarious world, the nation that shepherded Europe through the ruins of a post-World War II era that would be defined by the Cold War, and later by terrorism.

“The lesson could not be any clearer for Western democracies,” stated an editorial Wednesday in Spain’s daily El País. “The price of polarization is extremely high. It would be wrong to underestimate it.”

The surge of rowdy pro-Trump militants, some decked out in camouflage gear or medieval-style dress, desecrating the halls of the Capitol — a global emblem of democracy — was as riveting as it was unfathomable for many in Europe and elsewhere.

“We grew up and were raised in West Berlin with the idea that the United States was a force for good,” said Judith Hackenberger, a Berlin physician who was reared in the western half of the divided postwar city. “We always had faith in the United States and its democracy. That faith has been shaken.”

Germany, with its own historic demons, is wrestling with resurgent far-right political forces. Authorities blamed extremists last summer when several hundred people protesting the country’s coronavirus restrictions tried to break into the Reichstag, the federal parliament building in Berlin. Unlike what happened in Washington, however, police stopped the German protesters from breaching the legislative hub.

“In this country, too, there is a growing number of people who, similar to many Trump supporters, have drifted into parallel worlds full of populism, conspiracy theories and fake news,” noted Germany’s Neue Osnabruecker newspaper following the assault on the U.S. Capitol.

To be sure, allies promptly rallied in support of the United States, dismissing the mayhem as a kind of aberration, a one-off manifestation of the death throes of the toxic administration of a leader widely disparaged in Western capitals.

“What happened today in Washington, D.C., is not America,” declared French President Emmanuel Macron, shifting to English at the end of a video message posted Wednesday on Twitter, and speaking with a backdrop of U.S., European Union and French flags. “We believe in the strength of our democracies. We believe in the strength of American democracy.”

But reassuring dispatches from Macron, German Chancellor Angela Merkel and other leaders also had a whiff of wishful thinking that some sense of normality will return to Washington once Trump exits. Others were less sanguine that the disquieting genie of U.S. volatility so palpable in recent years would easily be stashed back into the bottle.

“This is the widely anticipated outcome of Trumpism,” tweeted Pierluigi Castagnetti, a center-left former politician in Italy. “And, unfortunately, it will not end today…. When politics is replaced by deception and fanaticism of the people, the drift is inevitable.”

Still, it is plausible that the sheer theater of the Capitol siege — and the tumultuous Sturm und Drang of the Trump epoch — may have inflated the perception of transcendent threat. The United States is, after all, a nation that has refined its democracy for more than two centuries, through territorial expansion, a civil war, two world conflicts, ethnic, racial and economic tumult and sundry other challenges.

“It is not an American Weimar moment as in 1933, but rather an empowerment moment in the media age, with livestreams and selfies of those involved,” said Joern Leonhard, a history professor at the University of Freiburg, referring to the collapse of Germany’s Weimar Republic and the ascendancy of Hitler’s Nazi movement. “No vacuum has been created, and the institutions kept functioning.”

That Trump finally conceded his electoral defeat on Thursday has soothed some of the transnational angst. A peaceful transfer of power — a core characteristic of democracy — has validated U.S. safeguards against the emergence of despotic rule, which for decades has been a lesson to other democracies.

In the Middle East, Latin America and elsewhere, authoritarian regimes have retained their grips through crushing dissent, rewriting constitutions, neutering electoral supervisors and courts, and calling out the troops. Though he admires leaders like Putin, Trump, in the end, largely had only the power of his personality — not enough to overcome the checks and balances enshrined in the U.S. system.

“Democracy relies on people sharing a common set of rules,” noted Joshua Landis, director of the Center of Middle East Studies at the University of Oklahoma. “The price of not sharing sturdy institutions and a common set of rules can be seen in the Middle East. There, the political landscape is scarred by civil wars, sectarianism and strongmen.”

For many foreign leaders, President-elect Joe Biden recalls a more traditional era of U.S. democracy and governance that they are comfortable with. The question, though, is whether Biden can erase the ills done by Trump and revive trust at a time when the world is much changed from four years ago.

“Repairing the substantial damage to U.S. image in the world and regaining credibility on democracy issues will be tough and take a long time, even under the best scenario,” said Michael Shifter, president of the Inter-American Dialogue, a Washington-based study group. “The problem is not so much Trump himself, but rather his enablers and those who have remained silent and been complicit in his patently antidemocratic rhetoric and behavior.”

What’s next? That’s the question echoing in world capitals fixated on their own plot twists and the compelling reality show unfolding daily in Washington.

“It’s impossible to know what will come after these events, which appear to have arisen from the imagination of a screenwriter for [Hollywood] blockbusters,” wrote columnist Pascal Beltrán del Río in Mexico’s Excélsior newspaper. “Where is all this headed? It’s too early to say.”