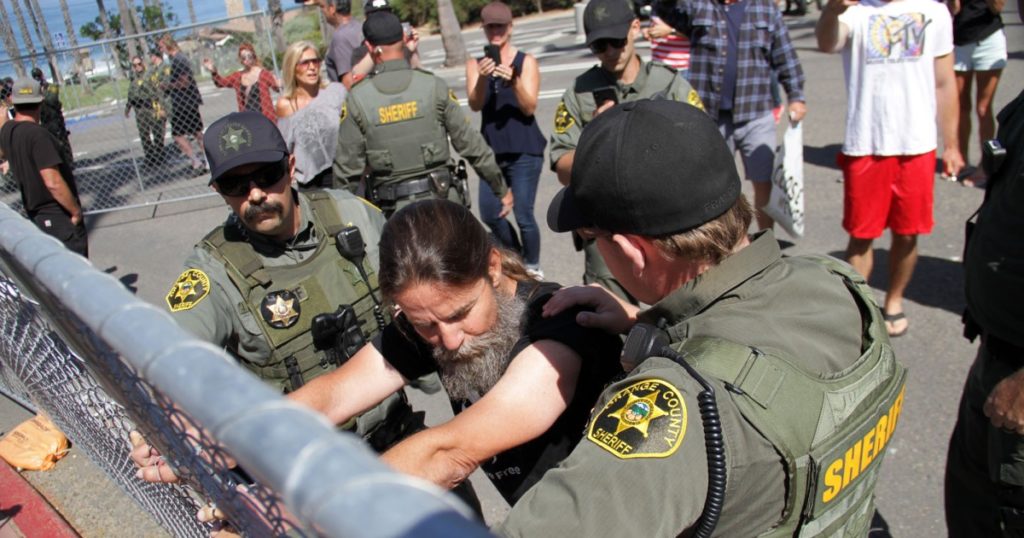 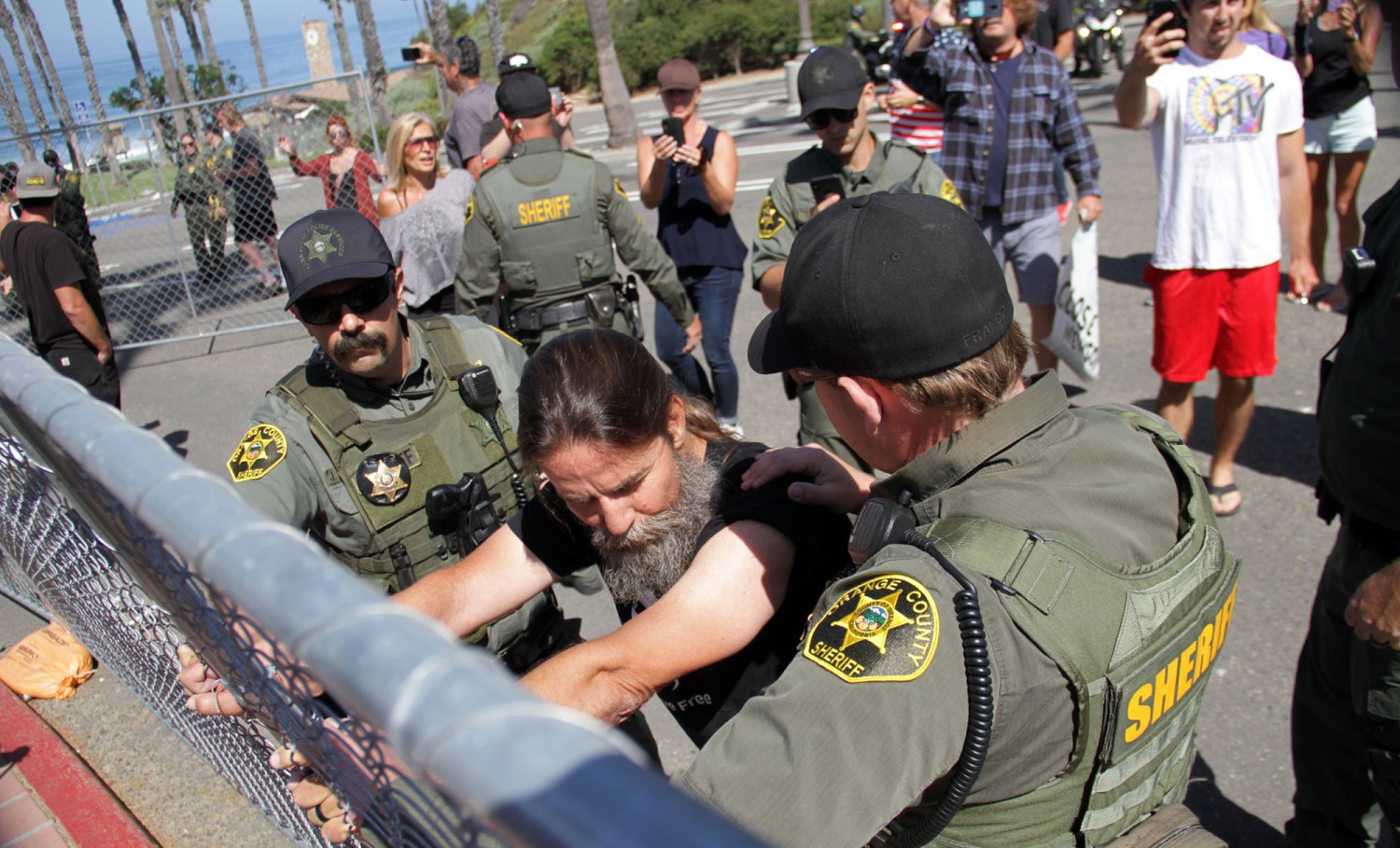 Two Orange County extremists — a former police chief and his partner in organizing Stop the Steal rallies — have been indicted along with members of the Three Percenters militia for their roles in the Jan. 6 Capitol insurrection.

Though all are charged with being in restricted areas of the Capitol, Warner is the sole indictee to be accused of entering the building, via a broken window. Kinnison and Warner are charged with destroying evidence, while Taylor also faces a weapons count for carrying a knife with a blade longer than 3 inches.

The grand jury indictment, unsealed Thursday, alleges the men conspired on social media prior to the riot — including on a Telegram channel dubbed Answer the Call and via text messages — creating travel plans that included discussion of bringing weapons to the Capitol. On the day of the riot, they breached the Capitol and encouraged others to do so as well, posting videos and pictures as they went, the indictment says.

On Dec. 29, prosecutors allege Taylor wrote on that Telegram channel that, “I personally want to be on the front steps and be one of the first ones to breach the doors!”

That same day, Taylor texted Hostetter to ask if he was bringing firearms, according to the indictment. Hostetter allegedly replied, “NO NEVER (Instagram now monitors all text messages … this has been a public service announcement.)”

Hostetter then texted three emojis of “faces laughing with tears coming out of their eyes,” the court documents allege.

Hostetter and Taylor allegedly connected with the other four men via social media, where they introduced themselves as members of the Three Percenters, an extremist group that often includes ex-military and law enforcement members.

The charges represent the first conspiracy allegation against members of the Three Percenters.

A U.S. Justice Department official said five of the six men are in custody.

Hostetter surrendered in Santa Ana, according to an FBI spokeswoman. Martinez appeared in a Texas court Thursday morning and Mele, Kinnison and Warner will appear in a Riverside court.

Laura Eimiller, a spokeswoman for the FBI in Los Angeles, said Hostetter will be in a federal court in Orange County on Thursday. Taylor is expected to appear with him, though he has not yet turned himself in, according to the FBI.

“Mr. Taylor has never been any part of any organized militias,” said Dyke Huish, his attorney. “After six months of not hearing anything, we were very surprised at the government’s position and will challenge where appropriate.”

Huish described the American Phoenix Project, the organization Hostetter founded to push his conspiracies, as “three dudes that organized some things and gave speeches. They’re not a militia.”

Videos from the Jan. 6 riot show Taylor acting primarily alone, joining a mob outside the Capitol doors screaming at a line of police, and at times attempting to push through them. Huish has confirmed that Taylor was carrying a large knife, its handle visible from his vest.

The third director of American Phoenix Project, Morton Irvine Smith, was not named in the indictment. Smith had joined Taylor and Hostetter in Washington, but said that when the crowd began to surge toward the Capitol, he did not follow.

Hostetter is a ponytailed yoga instructor who found a second life in the new age industry after leaving law enforcement.

Taylor is a tech entrepreneur who called his red Corvette the “Patriot Missile.”

The two men appeared to have formed a bond in recent months over their shared disdain for coronavirus restrictions, and later, a false belief that the presidential election outcome was falsified through illegal voting and conspiracies involving the machines that counted votes. Those theories have been widely debunked.

But the two were leaders in organizing Stop the Steal rallies in California, and planning the trip to Washington, D.C., according to court papers. On Jan. 1, prosecutors allege Taylor started a Telegram chat called “The California Patriots-DC Brigade” that Warner, Kinnison, Martinez and Mele joined, identifying themselves as “part of so cal 3%.”

The group, according to court documents, described itself as serving as the communications point for militants traveling to the Capitol.

At the rally, prosecutors allege that Taylor urged on rioters attempting to push through police, yelling “Move forward Americans.”

Taylor made a selfie video as he and Hostetter headed down Pennsylvania Avenue to the Capitol, police lights and officers gathered and Taylor declared, “We’ll see who these guys end up working for.” They joined rioters on the lower west terrace, and Taylor could be seen carrying a knife in his front chest pocket of his plate carrier vest and urging “rioters to push through another line of officers on a lower level.”

Martinez and Kinnison, wearing a gas mask, were present among rioters on the restricted Upper West Terrace of the Capitol, while Mele shot a selfie on his cellphone, declaring, “We stormed the Capitol.”

Hostetter is visible armed with his bullhorn, but exhorting demonstrators as they were pushed back by police to be careful: to walk, not run.

Social media pictures showed Hostetter and Taylor grinning from one of the terraces while the Capitol was under siege.

They were also indicted for tampering with documents or proceedings and unlawful possession of a dangerous weapon on the Capitol grounds.

In the wake of the violent insurrection, Hostetter and Taylor tried to distance themselves from it.

Three weeks after the Capitol invasion, the FBI agents with the support of SWAT officers searched the homes of Hostetter and Taylor. In his private Telegram channel, Taylor portrayed himself as the victim.

“The fbi is fully weaponized against patriots,” he said in a message reposted to Facebook. “I never went into the Capitol, no violence no damage to property. All this for waving a flag and singing the national anthem!”

Taylor’s lawyer offered a different description, conceding his client carried a knife onto Capitol grounds but saying he didn’t enter the building and was “caught up in a wave of rhetoric and excitement.”

“Russ Taylor is a normal person who got very emotionally wrapped up in his belief in those freedoms that made America the America he believes in,” Huish told The Times in March.

What happened, Taylor’s lawyer said, is a “cautionary tale of when there’s too much political noise that one can’t see clearly.”