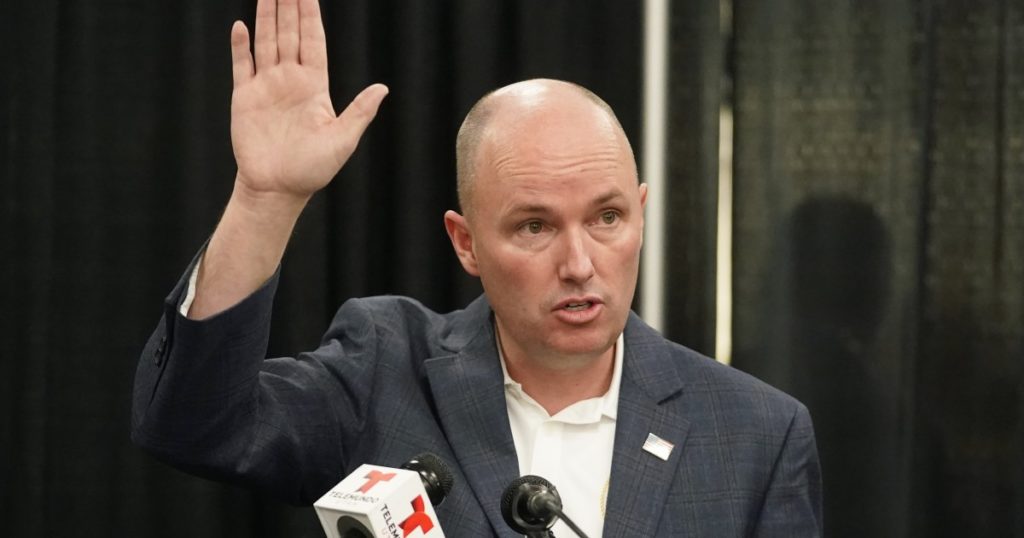 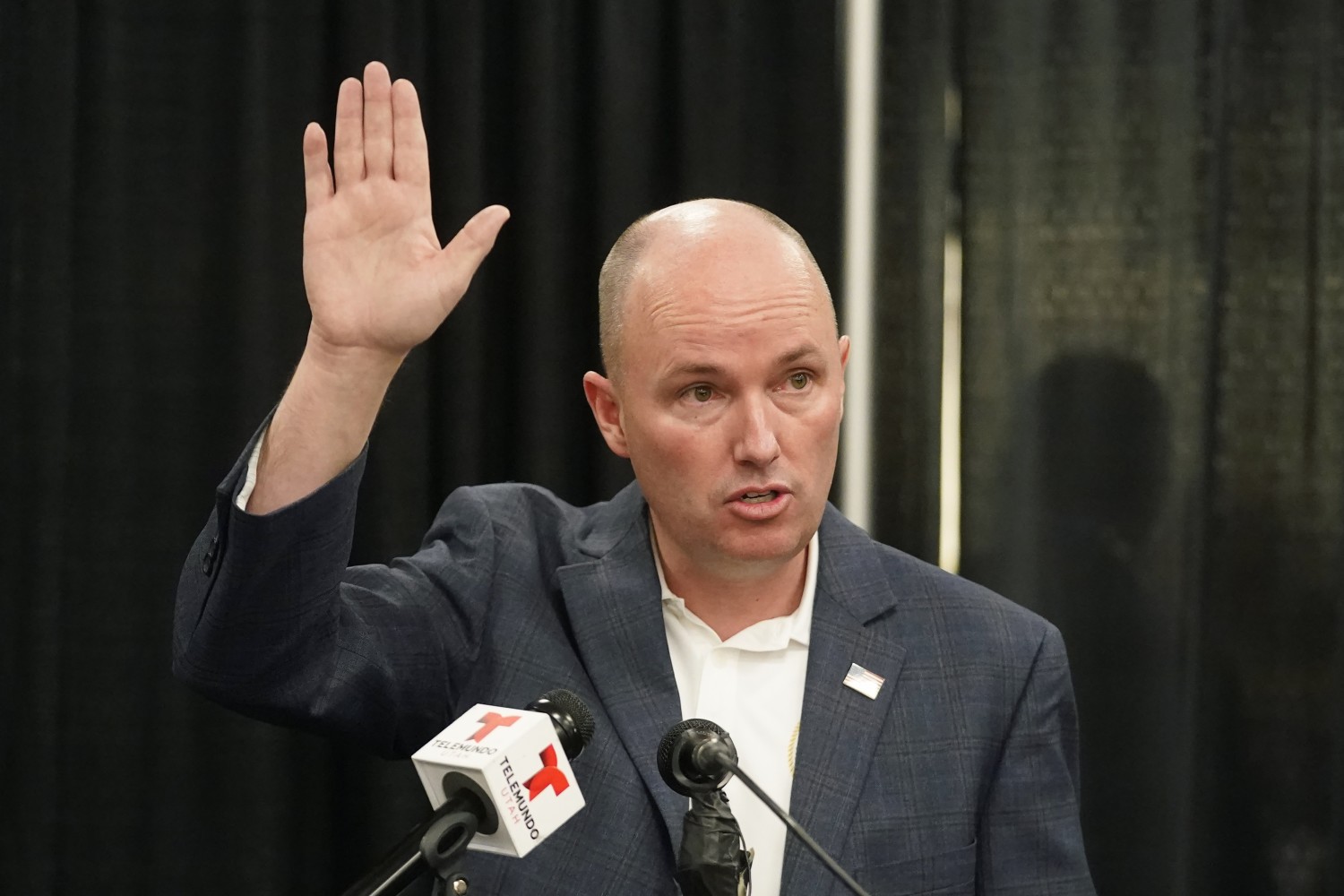 Spencer Cox stopped watching cable TV years ago when he tired of Fox News polluting his home with bile and outrage. He teared up discussing a law banning transgender athletes from girls sports, sidetracking the measure while suggesting lawmakers spend time with the kids they were targeting.

He didn’t vote for Donald Trump in November or in 2016 and said efforts to undermine those presidential elections were a danger to democracy.

In short, Utah’s governor is different from many of his fellow Republicans. And, for that matter, many politicians.

He doesn’t ooze ambition from every pore, doesn’t recite talking points like holy gospel, doesn’t feel obliged to agree with everything that everyone in his party says or does and doesn’t feel compelled to reflexively attack the other side.

That makes him an outlier, he acknowledged, in today’s pungent political culture, and if it means his career is cut short, that’s fine.

“I think I can hold those two ideas equally and passionately,” he said in an interview in his small ceremonial office, just off the Capitol’s majestic rotunda.

Beyond Utah, Cox concedes there may no longer be a place for him in a Republican Party so wedded to cultural warfare and so deeply in Trump’s thrall. That’s fine, too. (Although with 65% of voters approving of his job performance in a May survey for the Deseret News and University of Utah, Cox is apparently doing something right.)

“There doesn’t seem to be much of an appetite for it right now,” he said of his heretical notions, like rejecting Trump’s lie about losing the White House due to voter fraud and Cox’s refusal to run negative ads against his opponents. “But pendulums swing, and I certainly hope they swing that direction again soon.”

The governor, 45, began his political career in 2004 with his election to the City Council in Fairview, a rural community of about 1,500 in central Utah. The next year, Cox became mayor, and three years later, he was elected to the Sanpete County Commission, where his father once served. In 2012, Cox was elected to the state House of Representatives.

He started out, he said, as a typical partisan firebrand, doing what he thought he should — scalding Democrats in floor speeches and on social media — until a fellow lawmaker suggested Cox would be happier and get more done trying to work across the aisle. That approach had the added benefit of being truer to Cox’s nature.

In 2013, Gov. Gary Herbert chose him to replace the state’s lieutenant governor, Greg Bell, who was stepping down to make more money outside government. Cox nearly declined the offer.

He and his wife, Abby, and their four children had a good life on the family farm where Cox grew up with his seven siblings. He’d made an earlier decision to descend the career ladder by quitting his job with a Salt Lake City law firm, taking a sizable pay cut and returning to the farm and the business his family founded, a telecommunications firm serving rural Utah.

Uprooting his wife and kids to become lieutenant governor was a deal breaker; Cox took the job only after the governor agreed he could stay in Fairview and each day commute 200 miles roundtrip to the Capitol in Salt Lake City.

The moment clarified Cox’s priorities and delivered him a certain freedom.

“When you define yourself as a politician by your office, when that’s all you know and when you have to hang onto that, whether it’s for status, whether it’s for the job, for influence, for pay, whatever … everything you do is just to get to the next election,” Cox said. “So the minute I decided, my wife and I decided, that we had better lives outside of politics, that there were things more important to us than politics, the job actually got easier.”

When he decided to run for governor in 2020, Cox treated the race as an experiment of sorts, seeing if he could cut against prevailing practice and win by waging a positive campaign.

A pollster working for him, Quin Monson, tested several lines of attack against other Republicans, including former Gov. Jon Huntsman Jr., who was seeking to reclaim his old job. They proved highly effective with voters, and Monson urged Cox to use the attacks in his TV ads. He refused, a decision that nearly cost him the election; Cox edged Huntsman in the GOP primary 36% to 35%.

It “was part of a strategy” to contrast with others who slashed and burned, said Monson, who teaches political science at Brigham Young University. “But it was not an act. He was trying to be his best self.”

The strategy carried over to the general election.

There was little chance of Cox losing in overwhelmingly Republican Utah. (He ended up crushing his Democratic opponent, Chris Peterson, by a margin of more than 2 to 1, and Cox’s family now resides in the governor’s mansion.)

Still, it was remarkable to see the two contestants side-by-side in television spots — masked and socially distanced — looking like overgrown candidates for student government as they made jokey pitches for themselves and earnest pleas for public civility.

“We can debate issues without degrading each others’ character,” said Peterson, in a dark suit and blue necktie.

“We can disagree without hating each other,” said Cox, in a dark suit and red necktie.

The fact that the ads went viral, garnering attention around the world, shows how rare mutual respect and political decency have become.

Cox never abandoned his conservative beliefs. He strongly opposes legal abortion and has signed pro-gun legislation.He joined other Republican governors last month in cutting off increased federal COVID relief benefits, believing they kept some from seeking work and made it harder for businesses to fill empty positions.

The difference is in tone and attitude. “We should be passionate about our principles,” Cox said. “But we shouldn’t try to win by tearing others down.

“We have this crazy idea that being a Republican or being a Democrat is some inherent trait that you’re born with,” he elaborated, or that the parties are churches that must excommunicate those who fail to strictly abide by their orthodoxies.

“By pointing out things I disagree with, I think that makes the Republican Party more attractive to people, not less attractive. I don’t think people say, ‘Oh, well, Gov. Cox disagrees with some other Republicans, so I’m going to become a Democrat.’”

Critical self-examination, however, is not much in vogue these days among Republican leaders, any more than broadening the party beyond its base of hardcore Trump supporters. Cox admits he was wrong about Trump and his appeal in 2016 and failed to recognize his ability to commandeer the Republican Party and refashion it in his pugnacious and polarizing image.

He concedes he may be wrong again in offering the GOP his prescription going forward: less combat, more listening and attempts to work constructively.

In which case, life back on the farm awaits.