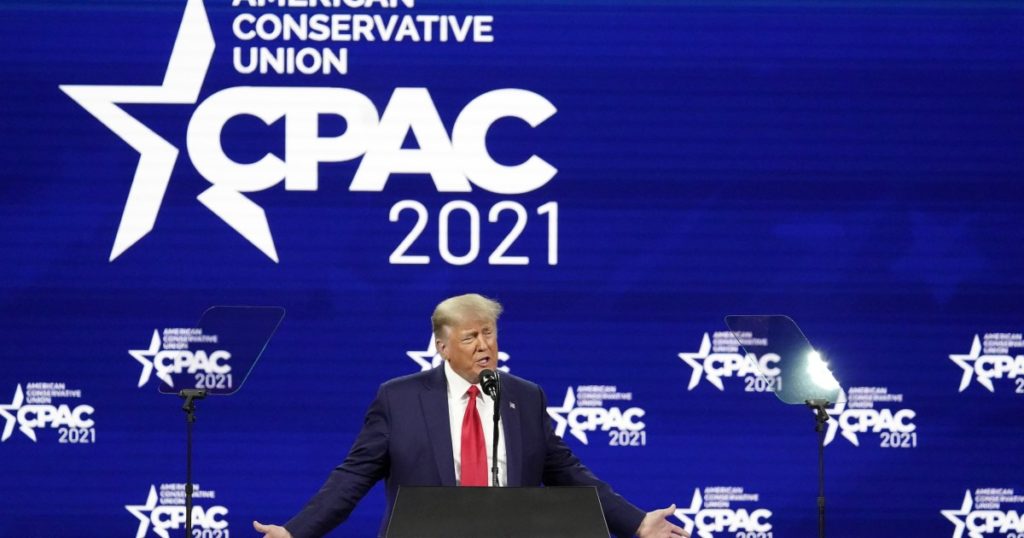 It’s no secret that President Biden has savored the relative silence from his predecessor, who remains banned from Twitter and hesitant to leave the gilded cocoon of his Florida resort.

But Biden might actually want former President Trump to speak up about one thing: the importance of getting inoculated against COVID-19. Recent polling shows that nearly half of those who supported Trump last year don’t want a vaccine, a critical mass of people that potentially could be a barrier to reaching herd immunity in a politically polarized country.

“If former President Trump woke up up tomorrow and wanted to be more vocal about the safety and efficacy of the vaccines, certainly we’d support that,” said Jen Psaki, the White House press secretary, at Monday’s briefing.

Her comments echo Dr. Anthony Fauci, the federal government’s top expert on infectious diseases, who has encouraged Trump to become more vocal about the inoculation effort.

“I think it would make all the difference in the world,” he said in an appearance on “Fox News Sunday.” “He is a very widely popular person among Republicans.”

It’s unclear, however, what impact Trump could have. Biden, asked by a reporter Monday whether he wanted the former president to talk more about vaccinations, said he’s been told that it’s more important for skeptics to hear from their healthcare providers and community leaders.

“I urge all local docs and ministers and priests to talk about why it’s important to get that vaccine, and even after that, until everyone is vaccinated, to wear this mask,” Biden said after finishing remarks on the $1.9-trillion relief plan he signed into law last week.

He didn’t seem eager to hear from Trump, whom he recently dubbed the “former guy” and said he’s “tired of talking” about him.

“If I have a heart attack, I don’t want a politician running over to give me care,” he said. “I want a doctor, I want a nurse. Why should this be any different?”

In a recent focus group conducted by Republican pollster Frank Luntz, vaccine-skeptical Republicans were more interested in hearing from medical experts and learning more about how the shots were developed. Some skeptics fear the vaccines were rushed, yet the COVID-19 vaccines were approved after larger-than-normal trials and their development built on decades of research.

Jason Miller, a Trump advisor, did not respond to a question about whether the former president would get more involved in encouraging his supporters to get vaccinated. Trump’s reluctance is ironic given his insistence on receiving credit for overseeing the rapid development of the COVID-19 vaccines, a landmark scientific accomplishment.

Last week, in a statement featuring his familiar blend of unconventional capitalization and punctuation, Trump said that “if I wasn’t President, you wouldn’t be getting that beautiful ‘shot’ for 5 years, at best, and probably wouldn’t be getting it at all. I hope everyone remembers!”

He did not, however, encourage people to get vaccinated. Last month, he only briefly told supporters to “go get your shot” during a lengthy speech at the Conservative Political Action Committee summit in Florida.

And when Trump and his wife, Melania, received the vaccine in early January before leaving the White House, neither made it public. Their inoculations weren’t revealed until weeks later, after he’d left office.

In contrast, Biden and Vice President Kamala Harris each made a point of getting vaccinations on live television, to serve as role models for hesitant Americans. More recently, every other living former president — Jimmy Carter, Bill Clinton, George W. Bush and Barack Obama — jointly participated in a public service advertisement to encourage people to become inoculated.

“They did not need an engraved invitation to do so,” Psaki said.

Concerns about vaccine hesitancy will become more pressing as the supply of doses catches up with demand. Biden wants every American adult to be eligible for a shot by May 1.

The polling about Republicans’ skepticism has reshaped the narrative around the inoculation effort, which had previously focused on vaccine hesitancy among people of color. The recent poll for NPR, PBS NewsHour and Marist College showed that 49% of Republican men and 47% of Trump supporters did not want the vaccine, compared to 37% of Latinos and 25% of Black Americans.

The Biden administration is preparing a national campaign to convince people to get vaccinated when they’re eligible. Fauci and Dr. Francis Collins, director of the National Institutes of Health, are scheduled to participate in an event with evangelical leaders on Tuesday.

“We know that people are not looking to be convinced by the government or by some other entity,” he said. “They want to have conversations with people locally in their community, whether it’s their doctor, their pharmacist or other people that they trust.”