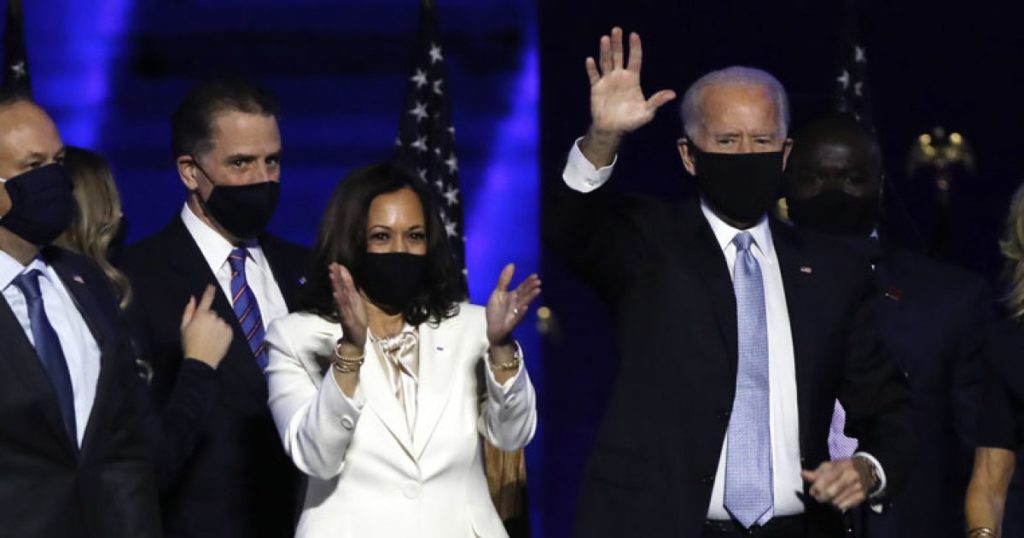 As President-elect Joe Biden labors to rescue the nation’s ragged coronavirus response, no challenge looms larger than rallying Republicans and Democrats behind a unified effort to wear masks and take other basic steps to control the pandemic.

Months of political disputes over face coverings, social distancing and other public health interventions have turned even the simplest precautions into partisan minefields.

And relentless attacks by President Trump and his allies have sapped trust in public health leaders and institutions such as the Centers for Disease Control and Prevention and the Food and Drug Administration, even as the COVID-19 pandemic rages out of control in wide swaths of the country.

“We need to tone down the political rhetoric … but we are digging out of a huge hole,” said Dr. Richard Besser, who heads the Robert Wood Johnson Foundation and previously led the CDC. “Once you’ve lost trust, it’s very hard to get it back.”

Biden, who made unity a central message of his successful campaign, issued an urgent plea this week to Americans to put aside partisan fighting over the virus.

“We could save tens of thousands of lives if everyone would just wear a mask for the next few months. Not Democratic or Republican lives — American lives,” Biden said after meeting with members of a newly formed COVID-19 advisory board Monday.

“We have to do this together,” he added.

There are signs that some Republican officials are prepared to support mask wearing and other restrictions to slow the virus’ spread.

Earlier this week, amid soaring infections and a crush of patients that threaten to overwhelm hospitals in his state, Utah’s GOP Gov. Gary Herbert declared a state of emergency and is requiring residents to wear masks in public.

But Trump, who mocked Biden during the campaign for regularly wearing a mask, continues to eschew face coverings at public events and White House gatherings — even after being hospitalized for COVID himself, and as growing numbers of White House staff and guests become sick.

And although surveys show support for wearing masks among Democrats and Republicans, there is substantially more resistance to mask mandates among Republicans in many places. In a recent Texas poll, for example, 81% of Democrats thought there should be a state law requiring masks in public, while just 51% of Republicans felt the same way.

Across the country, many GOP elected officials are still resisting public health restrictions, despite record-setting infection numbers and mounting evidence that masks and other simple steps can substantially slow the spread of the disease.

In South Dakota, where new COVID-19 cases have nearly tripled in the last month, the Republican mayor of Sioux Falls cast the decisive vote this week against a new mask mandate.

In North Dakota, also among the hardest-hit states, GOP Gov. Doug Burgum refused to issue a mask requirement earlier this week even as he moved to allow nurses who catch COVID to continue working. But as the number of infections mounted, he reversed himself Friday night and mandated that masks be worn statewide.

Ohio Gov. Mike DeWine, also a Republican, faced pushback this week from GOP leaders in the Statehouse when he proposed tougher mask rules in response to rising pressure on hospitals in the state.

“These messages have inured sections of the American public to evidence-based messages that need to be heard,” said Dr. Irwin Redlener, who directs the Pandemic Resource and Response Initiative at Columbia University.

Public health leaders say the messages are impeding efforts to control the current surge of infections and are hard to overcome, especially as Trump continues to stoke partisan divisions over the election results.

“Masks and social distancing have unfortunately been weaponized politically,” said Dr. Max Michael, dean of the University of Alabama at Birmingham School of Public Health. “You can’t flip a switch and make that go away.”

Former Utah Gov. Mike Leavitt, a Republican who served as Health and Human Services secretary under President George W. Bush, also said Biden has his work cut for him, especially since public health is primarily a state and local responsibility in the U.S.

“He is really going to have to seek a partnership with state and local officials. That starts with good presidential communication,” Leavitt said.

The former health secretary, who backs a more robust public health response to the pandemic, said restoring scientists and public health leaders to the forefront should also help.

Biden has repeatedly said that experts who have been sidelined by Trump — such as Dr. Anthony Fauci, director of the National Institute of Allergy and Infectious Diseases — will play a central role in leading his pandemic response.

The president-elect has also made clear he plans to model good public health practices, such as mask wearing and adhering to size limits on gatherings.

“It’s easy to underestimate the influence of a leader’s behavior, but it’s so important,” Gee said, adding that Democratic Gov. John Bel Edwards has helped keep Louisianans focused on health precautions by consistently using a mask himself.

“We have to get through to communities that are often resistant to government interventions,” Stanford said.

She noted that public health messages from people like Brigham Young University football coach Kalani Sitake, who has urged Utahans to practice social distancing to slow the spread of COVID-19, may be far more effective in a place like Utah than anything a Democratic president could say.

Another former red state healthcare official suggested a national memorial for the victims of the virus to bring the country together and rally Americans behind a more unified, consistent public health response.

But Biden’s most powerful tool for convincing more Americans to take precautions may simply be the virus itself.

As new infections exceed 150,000 a day, threatening to overwhelm nearly every state in the country, growing numbers of Americans now know someone who has been sickened.

“People are seeing how serious this is,” said Don Palmisano, executive director of the Medical Assn. of Georgia, that state’s largest physicians’ group. “That’s going to make a difference.”