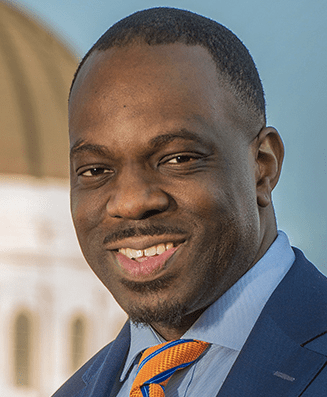 In a wide-ranging conversation hosted by SPUR, Caltrans Director Toks Omishakin addressed some topics that aren’t usually the focus of a state DOT. He touched on the department’s role in climate change and transit, and discussed the new Caltrans Office of Race and Equity. He also talked about speed limit enforcement, congestion pricing, and highway expansion.

“How does a transportation department focus on climate?” asked SPUR’s Nick Josefowitz.

“I don’t think we have a choice,” replied Director Omishakin.

But Caltrans is not doing this alone, he added, because the climate action focus is very much in alignment with governor Newsom’s recent Executive Orders

Josefowitz mentioned road pricing as a key strategy for addressing climate change by reducing driving, now being explored in regional plans throughout the state. But Omishakin replied that it is only one of several tools.

“The number one thing we need to do is provide people with more choices,” he said, “whether that is rail, bus, walking, or biking.”

“There’s no doubt that congestion pricing and managed lanes are a part of that,” he said, but “from an equity standpoint, it’s a challenge.” Done right – with equity in mind – it can provide opportunities to increase and improve transit service, for example. “But we get caught up in how much it’s going to cost,” he said, instead of focusing on its benefits.

Transit has not been a big focus for Caltrans. “The transit division in most DOTs manage federal grants,” said Omishakin. “Our team is focused on a different task.” They have helped formulate the state rail plan, for example, which addresses both freight and passenger rail, and are studying the state role in supporting local governments and smaller transit agencies. “There are over 300 transit agencies in California,” said Omishakin.

One of Caltrans’ current projects is the California Integrated Travel Project (Cal-ITP), which is exploring ways to coordinate transit payments for riders, similar to ideas being promoted by Seamless Bay Area and others.

“We are not your Dad’s old transit department,” said Omishakin.

Josefowitz asked Director Omishakin about the state’s 85th percentile rule – in which speed limits are set according to how fast people are driving. “We’ve been rewarding bad behavior” with these rules, said Omishakin. He joked that he could get on a soapbox about the subject.

“The people who are not in two-ton vehicles – our most vulnerable road users have been subject to the highest increases in traffic injuries over the last five years,” he said.

But proven methods to control reckless driving and speeding, such as automated speed enforcement cameras, remain controversial and need legislative support. Omishakin said he sees signs that law enforcement, which has adamantly opposed allowing the use of cameras for any traffic enforcement, could be “coming around” on the subject.

He says that one possible future step is some kind of pilot program, focused on specific areas such as construction zones or school zones. At any rate, “we can’t normalize the behavior we have today,” he said.

Omishakin spoke at some length about the recently formed Caltrans Office of Race and Equity. “My job,” he said, “is to create a work environment where great ideas can come to light.” The idea for CORE had been proposed long before 2020’s reckoning on racial justice made it inescapable –  and it needed leadership support to expand.

“In the equity space, there can be a lot of lip service,” said Omishakin. “Equity is the word of the year. But I get frustrated with it being a talking point, when it’s something we should live by.” Caltrans needs to understand how people live in order to know how to serve them, he said. “That’s the bottom line.”

CORE is currently partnering with other state agencies to take a look at names on buildings, parks, and monuments to understand if they celebrate racist people or ideas and should be changed, he said. It’s an important symbolic effort, but just a start. “We need to get to [the point] where we see that every decision we make affects people in a meaningful way.”

He emphasized the importance of listening before anything else. “We get excited about steps to take, but we need to really listen – not just to communities, but also internally. Caltrans has over 20,000 employees” and they are not only all over the state but in every stage of understanding of these issues. That is, some people still don’t understand why anyone is talking about this, while some want to push forward quickly on taking action to fix things.

Omishakin said the death of George Floyd made him reevaluate what his own role is in helping change a culture that allows something like that to happen. “In transportation, what do we need to do to address this? We know we need to – there are a lot of people who don’t know some of the basic facts,” he said.

He started by having his entire leadership team watch two documentaries. “Divided Highways” is a 1997 PBS documentary that Omishakin watched in planning school. It details the ways that the interstate highway system was sold as a solution to many problems, including “blight.” It also shows how that push for new expensive infrastructure destroyed communities in ways they have never recovered from.

Another movie he had his executive team watch is “Segregated by Design,” a short film based on the book The Color of Law by Richard Rothstein about the ways federal, state, and local governments built segregation into every aspect of life.

A member of the online audience asked the Director if Caltrans would commit to stop expanding highways in urban areas.

“This is one of the issues that we need to get a better handle on,” said Omishakin. “You know about S.B. 743, which is moving us away from using Level of Service for cars in land use planning.
There’s been a lot of push and pull between the people who are trying to implement that law and others who want to build freeways.”

“A lot of people don’t like my response to this question,” he said. “But I don’t think we can use a one-size-fits-all solution. In urban areas: Yes, we should be done with building new lane miles. There we should be looking for other ways to increase capacity, through bus or rail transit, or other ways.”

On more rural and suburban areas, he said, there are still valid reasons for some highway expansions, including safety, connectivity, and economic development. “But we need to be cautious,” he said. Automatically widening busy two-lane highways into five-lane freeways is probably not wise. “We should be moving away from that.”