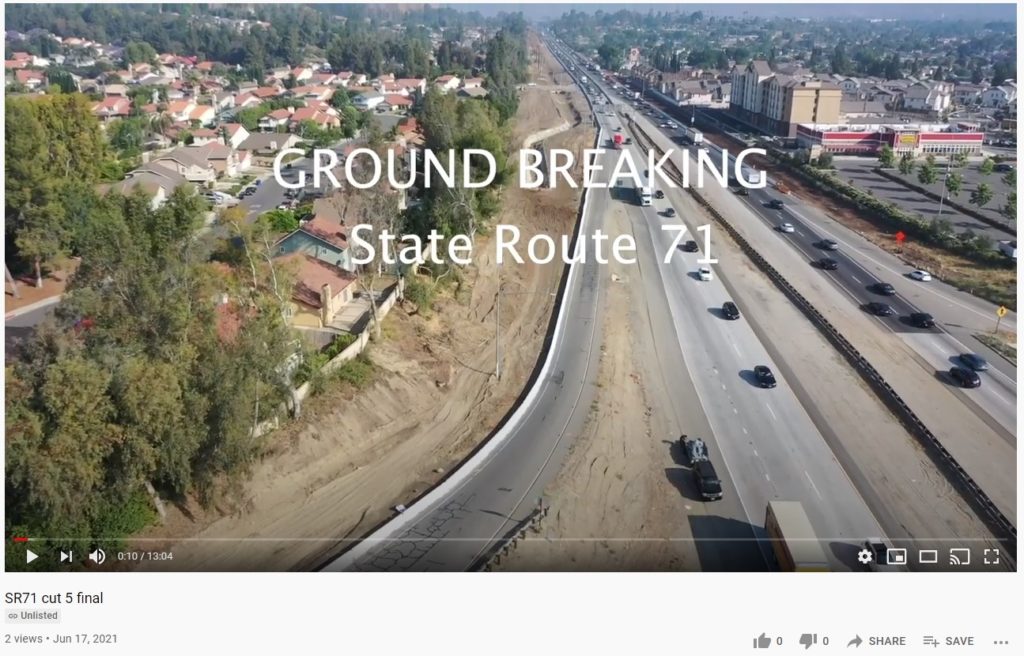 Today Caltrans and Metro celebrated a groundbreaking for a project to widen State Route 71 through Pomona. There was no on-the-ground groundbreaking, just a virtual one – a video posted to YouTube, featuring Caltrans District 7 Director Tony Tavares and a host of area elected officials. The SR-74 project will convert about 3.5 miles of existing four-lane expressway into an eight-lane freeway. Construction for the first phase – $174 million for just under two miles – is expected to complete in 2024.

[Note: at press time, Caltrans informed Streetsblog that the video had been taken down for corrections and will be reposted soon. For now SBLA left this article intact; if any Caltrans corrections change information referenced here, SBLA will revise this article.]

It’s difficult to find much information on the SR-71 widening project. The project does not appear on the Metro Highway projects webpage nor does it appear on the Caltrans District 7 Current Projects webpage. Digging deeper into these websites, the project does appears on some lists and in some presentations. There is a Metro factsheet dated August 2020, though it appears to be years out of date; it states that “SR-71 operates as an expressway with several at-grade intersections including Mission Boulevard” which is no longer the case.

Much of the widened right-of-way was already taken a while ago, with homes already demolished, but there appear to be some additional homes that may be demolished for this phase of the project.

Along the 71 near Mission Boulevard, numerous homes were already demolished.

Metro staff have claimed that this SR-71 project is not widening, but just a gap closure.

A lot has changed at Metro and Caltrans since the 1980s (when Metro didn’t yet exist), but this project has remained on the books, and will soon exist on the ground.