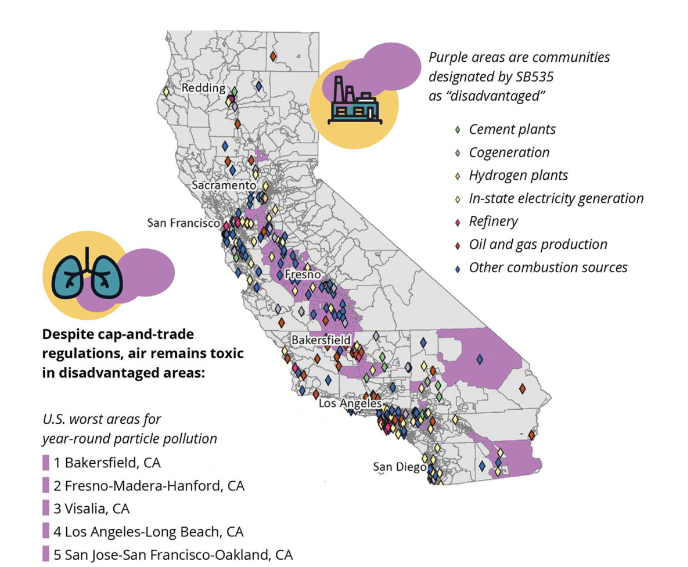 Since cap-and-trade was first introduced in California, advocates have charged that the system, aimed at reducing greenhouse gas emissions, is little more than a way for industries to pay for the privilege of emitting pollution. What is needed instead, they say – especially near communities that suffer the most from bad air and water quality – is for those industries to emit less pollution, full stop.

According to a recent article in Yes! Magazine,

Environmental justice was recognized from the outset as a necessary issue to address, given existing disparities in air and water quality among disadvantaged and more well-off communities–disparities that also break down along racial lines.

Cap-and-trade, a “market-based” mechanism, was created, in part, because it had support from industry, which seemed crucial for getting the system off the ground. But state regulators knew that finding a way to address environmental equity – and those disparities – has going to be necessary. They got buy-in by formulating rules that would provide “at least a portion of any monetary benefits from money raised by cap-and-trade to communities that are more hard hit by pollution.”

But that hasn’t been good enough.

Buying allowances means companies can choose to continue to pollute. California’s major polluters – the refineries, factories, and power plants that are regulated under the cap-and-trade program – are disproportionately located in disadvantaged communities and communities of color.

This has led to results that were predicted by environmental justice advocates from the beginning. That is, some studies have found that “more than half of the facilities covered under cap and trade actually increased their in-state emissions during the first three years of the program. These facilities were also more likely to be located in disadvantaged communities.”

From the point of view of communities living with pollution and health impacts from it, cap-and-trade is a failure if industries near them don’t have to change. While these communities might benefit from the programs paid for by cap-and-trade, such as electric vehicle rebates and even sustainability programs – those programs don’t directly address that pollution or those health impacts. The programs are also not widely available to everyone who needs cleaner air.

Note that this is not a matter of conflating greenhouse gas emissions with other kinds of pollution. While cap-and-trade is aimed at the greenhouse gases that contribute to climate change, GHGs are not emitted independently but in concert with other toxic pollutants that poison the air, soil, and water. The effects of GHGs are global, but the effects of toxic pollutants begin very locally.

Some feel uncomfortable about the source of these funds, because they often come at a cost to community health. ‘We would prefer it if there was no money coming from the cap-and-trade system because there was no pollution coming from our economy,’ says Alvaro Sanchez, director of environmental equity at the nonprofit Greenlining Institute.

The Yes! Magazine’s article, by Julie Rosen, also includes a useful step-by-step explainer of how cap-and-trade works, from placing a cap on emissions, to allowing trading of emission allowances and buying offsets, to how the money raised is invested. The lead image is from one of the article’s graphics.

As the author notes,

Cap and trade isn’t the only way to put a price on carbon, and it’s not the only one that raises environmental justice concerns. Such issues arise whenever policies rely on market forces to drive down emissions—because markets are famously unconcerned with equity.

Recently, and under some pressure, the Air Resources Board committed itself to upholding racial justice within its organization and regulations. That could, one day, translate into changes in the way the state regulates emissions.

Researchers are proposing ways that racial and environmental justice can be part of the existing cap-and-trade system, for example by setting local emission reduction goals near disadvantaged communities.

But it is all very slow, and people are suffering in the meantime.

Alicia Rivera, a community organizer for Communities for a Better Environment in Wilmington, says that she struggles to explain the concept of offsets to residents breathing unhealthy air. ‘The refinery gets credit, but in Wilmington, they haven’t reduced anything,’ she says.

This is a complex topic, and the full article, here, offers a good primer.