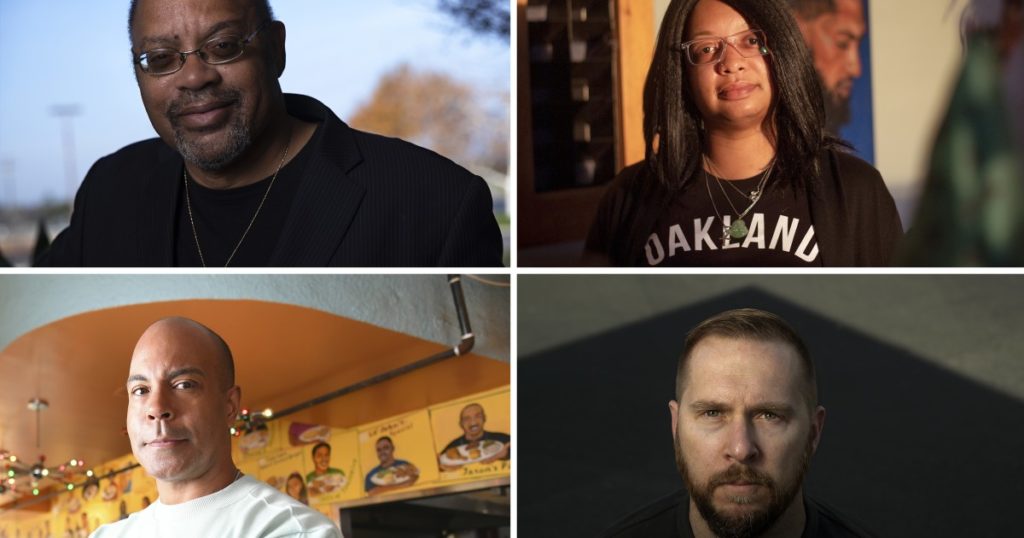 Maybe it’s because he grew up in Washington, D.C., in the shadow of government landmarks. Or perhaps it comes from time spent abroad, realizing that the foundation of America is the public’s trust in institutions. Whatever the reason, presidential inaugurations — the pomp and circumstance marking a new term of leadership — mean a lot to Angelo Frazier.

“Abso-luuutely,” the pastor from Bakersfield said, drawing out the word for emphasis. “They are part of the fabric of this nation.”

On Wednesday, when Joe Biden is sworn in as the 46th president of the United States, there will be stark reminders of how this inauguration is unlike the others. The ceremony will be heavily fortified with an expected 25,000 National Guard troops, after some supporters of President Trump violently stormed the U.S. Capitol two weeks before. Festivities will be mostly virtual, a concession to the ongoing pandemic.

It will mark the end of a tumultuous four years that saw one special counsel investigation and two impeachments of the sitting president, nearly 400,000 deaths from COVID-19, record high stocks, a roller-coaster job market and fierce national discussions about race and the very idea of democracy.

As one president’s chapter closes and another’s begins, Californians in two congressional districts — one that voted overwhelmingly for Trump, the other for Biden — took stock of the last four years and their hopes for what comes next. The Democrats, to no one’s surprise, are delighted to have new leadership; Republicans are bracing themselves for policies they’ll dislike.

But these complicated times defy tidy characterizations of liberal joy or conservative dread. In these distinct districts centered in Bakersfield and Oakland, voters report a tangle of emotions. They share a sense of being deeply unsettled, a fragile hope for consensus and a fear that the country may be too divided to find it.

“This moment, I think, is a turning point for us,” Frazier said. “Have you ever seen those little tops that you could spin and they will stand on a point? That’s what it seems like right now. It could either tilt one side or the other.”

Frazier’s political beliefs line up with those of Trump and the Republican Party: support for lower taxes and less regulation, opposition to abortion. His community of Bakersfield, powered by oil and agriculture, has long tilted conservative; 57% of voters in this congressional district represented by House Minority Leader Kevin McCarthy sided with Trump last November — the president’s best showing in California.

But Frazier, 61, still found the last four years challenging, seeing “the particular person who was duly elected demonized right from the beginning.”

The strain increased last year, as protests against racism and police brutality seized the national spotlight. Frazier, a Black man and police chaplain, blanched at blanket denunciations of law enforcement.

“Unfortunately, we’ve gotten to a place that everything’s racism. And I don’t believe that,” he said. Now, he sees a community that feels “shaken to its core.”

He thinks the country’s election officials take too long to count votes, damaging faith in the electoral process. He doesn’t say Biden’s win is illegitimate, but he wonders why the incoming president wouldn’t want additional audits of the ballots and voting machines to prove that the results were accurate. (There is no evidence that voting machines altered votes, and election officials in key states such as Georgia conducted multiple recounts and audits.)

Still, Frazier sees Biden’s term as an opportunity for both parties to turn away from the fringes and find a way to come together. His faith fuels his optimism.

“If I didn’t have a relationship with God, I don’t think I would be sitting here as encouraged as I am,” he said. “I would be probably running to the hills.”

Like Frazier, Carla Barrientos, also of Bakersfield, saw the last four years as “trying” — though from the opposite political vantage point. She found it painful when prominent residents would not voice support for racial justice or when someone drove a car into a Black Lives Matter protest downtown.

Even though the Trump years brought personal joy — the birth of her son, professional advancement — she was deeply affected by the harm the president’s policies did to others, particularly immigrant communities.

“We don’t live isolated; we don’t have our own island,” said Barrientos, 37, a special-needs educator. “So we have to think about more than just how well we’re doing.”

She doesn’t think Trump is the root of much of the vitriol she has seen in recent years, nor does she expect it to magically go away when he’s out of office. But she does allow herself to feel optimism for what’s to come, particularly at the thought of Kamala Harris, a Black woman like herself, assuming the vice presidency.

Last year was likely the first time Barrientos and her friend David Bynum voted for the same presidential candidate. Bynum, a lifelong Republican, couldn’t bring himself to vote for Trump in either 2016 or 2020. His vote in November for Biden was the first he’d cast for a Democrat.

The lawyer and entrepreneur doesn’t expect to love Biden’s tax policy, and he fears that new environmental laws could hurt Bakersfield’s economy. But he thinks the new president could quickly build widespread goodwill with a swift COVID-19 response.

“If it comes out in the first 100 days that, wow, more people are getting shots in their arms … seemingly, Trump hasn’t been doing anything for a while. So it does seem like there should be an opportunity to do better,” said Bynum, 38.

Political unity seems hard to reach, though, when he talks to people he respects who are convinced that the election was fraudulent. They say so without tangible evidence, even after Trump lost dozens of court cases contesting the results, many decided by conservative judges.

“There’s a narrative that just gets pushed, and there’s not really anything to back it up, other than repetition,” Bynum said. “What does Joe Biden do to fight that? He doesn’t. He’s got his media outlets informing his people, and the right [has] got theirs informing their people.”

The result, he fears, is the pendulum just swinging faster.

“We probably need a break,” Bynum said of fellow Republicans. “We probably need four years of just being in the party of dissent. And hopefully, the leader that shows up next time is someone everyone can rally around.”

Chris Johnston, like Bynum, tries not to get too worked up about politics.

“I didn’t vote for Joe Biden,” said Johnston, 51, a business development manager for a food distributor. “But that doesn’t mean I believe that on Jan. 21, my life’s gonna come to a screeching halt and be hellacious because he’s the president.”

The last four years have not been uncomfortable for him; as a conservative Republican, he has largely been happy with Trump’s policies, if not always with the things the president says. He hopes matters don’t change too drastically under Biden or, if they do, that Republicans win back some power in the next two years.

What weighs on Johnston is the widening gap between the even-keeled, civil interactions he has in real life and the angry divide he sees on social media and the news. Our online lives feel more stoked toward conflict, he believes, and he worries that on social media, liberals and conservatives don’t face equal restrictions.

He feels anxious that the country won’t be able to retreat from the battle lines that have been drawn.

“What I do know,” Johnston said, “and I believe this from the bottom of my heart, is that we don’t hate as much as we’re told that we hate. … I’m ready to like people again.”

‘I’m hopeful but pessimistic at the same time’

During the last four years, Candice Elder of Oakland couldn’t stand thinking of Trump in the White House. So she focused on a foundation she founded in 2016 to work with the homeless. Last year, the East Oakland Collective’s workload swelled with the rise of COVID-19 and the growing needs for food and cash aid.

In her view, the pandemic, much like Trump’s presidency, has laid bare the deep roots of systemic racism.

Elder, 36, is a Democrat, like most of the residents of this very blue corner of California. Her congresswoman, Rep. Barbara Lee, is a standard-bearer of the Democrats’ progressive wing. Nearly 89% of voters in Lee’s district picked Biden to be president in November.

Elder is relieved at the thought of Democrats taking power, but she remembers that it was her own party that backed the 1994 crime bill, which she blames for mass incarceration of Black men. She has mixed feelings over the incoming vice president’s tenure in law enforcement.

Her hope is that Biden and Harris can offer immediate pandemic relief and also address the underlying reasons the coronavirus has so disproportionately hurt Black people, Latinos and the poor. She summed up her outlook as “We’ll see.”

“I’m hopeful but pessimistic at the same time,” she said.

Derreck Johnson is far less torn about the incoming administration, particularly the woman being sworn in as vice president. He met Harris when they were both 16; they remain friends who call each other “cousin.” On Wednesday — pandemic be damned — he’ll be in Washington to see her take the oath of office.

“One thing I know is the new vice president has the ability to create unity,” he said. “She’s not afraid to walk into any area … and have a conversation about how do we create some balance.”

Johnson, 56, co-founder of the Oakland restaurant Home of Chicken and Waffles, said leadership has been lacking in Washington. He once had hopes that Trump would be good for the economy but never had much faith in his character. He believes the discord of the last four years, not to mention of this month, proved him right.

“It just brought out what this country is really about: racism,” he said. “Race is the guiding force behind all the evils going on in the country.”

Johnson, who unsuccessfully ran for City Council in Oakland last year, is fearful that the fractures over race are too deep to bridge.

“There’s going to have to be some kind of divine intervention,” he said, “because I don’t feel it’s going to go away.”

James Harris also believes Trump’s presidency will be defined by the nation’s reckoning with racism. But the former teacher and board member of the Oakland Unified School District, who now leads a messaging firm that includes among its clients the Golden State Warriors, saw that dialogue as necessary — even good.

“This year has brought about so many conversations we’ve never had the courage and time and attention and energy to have,” said Harris, 44. “So I think that’s always positive. Change can’t happen without tension.”

He wants to see Biden deliver something tangible: an aggressive infrastructure plan, for example, and pay raises for teachers. Democrats, he said, need to open their ears to those who disagree with them and prove they can respond with more than an “anti-Trump agenda.”

It may be hard to reach the most fervent Trump supporters, like those who sieged the Capitol, but Harris is not convinced that all 74 million of the president’s voters feel the same way.

“I tend to believe we’re here because we share something,” he said. “We share an idea of America.”