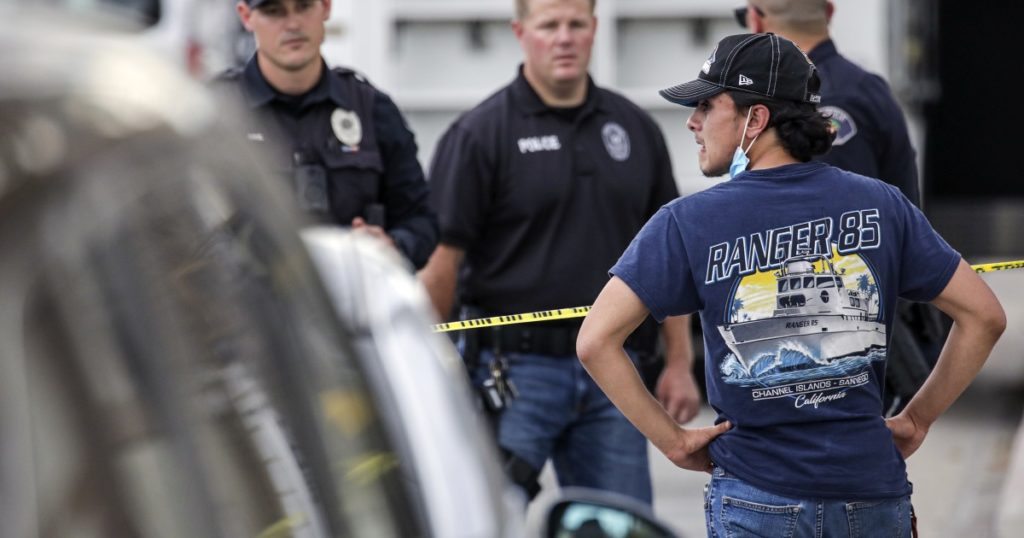 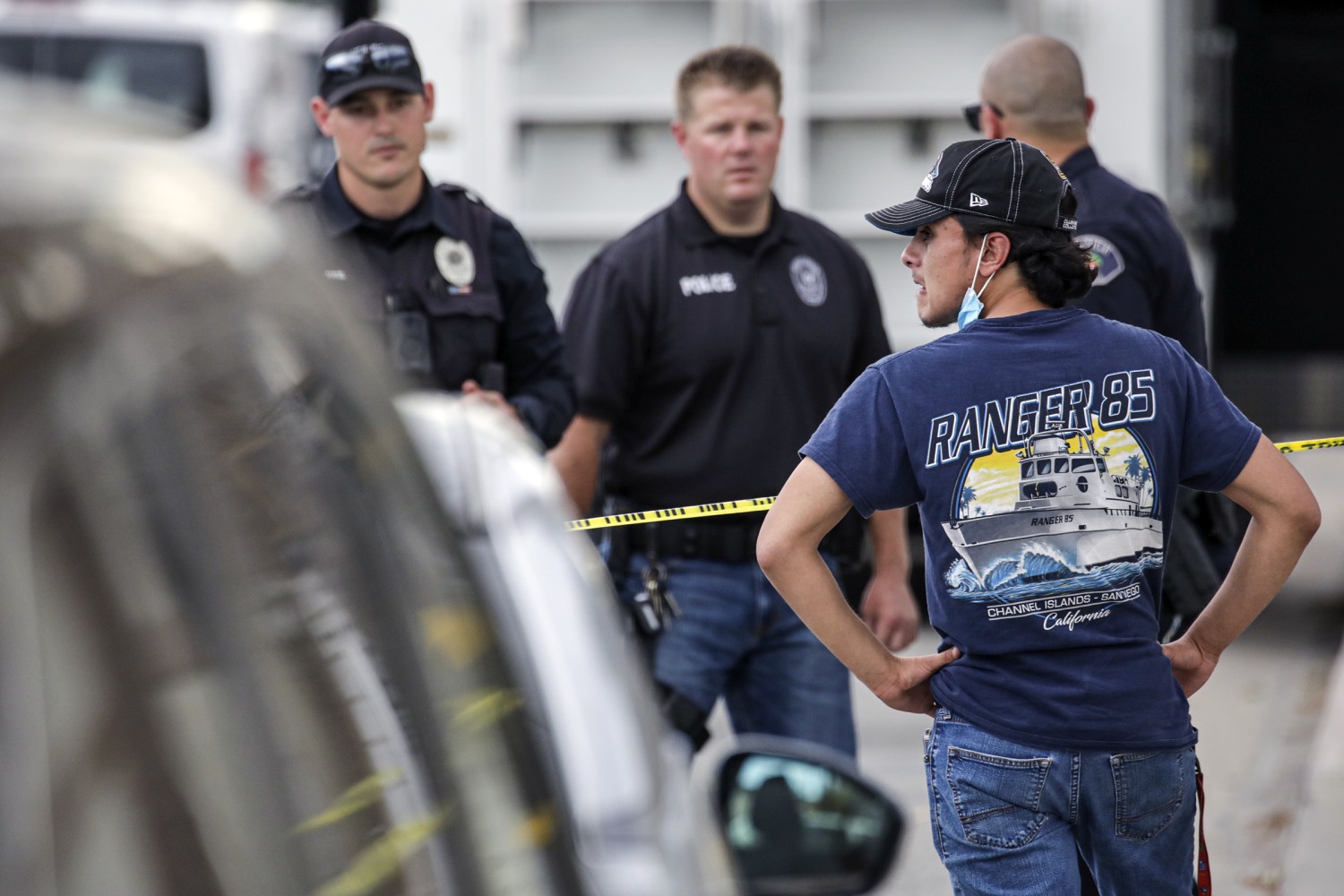 Amid a surge in shootings this year, a majority of California voters say that they believe gun control laws are effective in reducing violent crime, but confidence in them has slipped, according to a new UC Berkeley Institute of Governmental Studies poll co-sponsored by the Los Angeles Times.

The poll released Thursday found that 56% of the state’s voters surveyed believe stronger laws restricting the sale and possession of guns help make their communities safer, but the number is down from 60% who felt that way three years ago.

The poll also found that 57% of California voters say it is more important to place greater controls on gun ownership than it is to protect Americans’ rights to own guns under the 2nd Amendment, but that number is down from 64% who felt that way in 2018.

The decline in confidence in gun laws is a response to what people are seeing in their communities, said Mark DiCamillo, director of the Berkeley IGS Poll.

“I think it’s due in large measure to the increase in crime, especially violent crime,” DiCamillo said. “But still, this is a very Democratic and very liberal constituency and gun control laws have traditionally been quite popular among those voters not only here in California but nationwide.”

The poll was released at a time when key gun laws in California are being challenged in the courts by groups advocating for gun rights including the Firearms Policy Coalition.

Last month, California appealed a federal court decision that overturned the state’s ban on assault weapons after a judge ruled it is unconstitutional. The ban remains in effect during the appeal process.

The poll found 56% of California voters don’t believe that the assault weapons ban law violates the U.S. Constitution, which DiCamillo noted is consistent with the level of support for strong controls on gun ownership.

The poll numbers on the constitutionality of the assault weapon ban are not relevant to what is now a legal matter to be settled by the courts, according to Sam Paredes, the executive director of Gun Owners of California.

“Opinion doesn’t matter when it comes to constitutional rights,” he said.

Still, the response by voters on the assault weapon ban was encouraging to Shannon Watts, founder of Moms Demand Action, an organization that advocates for gun control laws.

“This poll clearly shows that Californians like myself see the recent ruling striking down California’s law prohibiting assault weapons for what it is: dangerous, an outlier in judicial precedent, and one that we believe will be overturned,” Watts said in a statement.

Asked about the slip in voter confidence in gun laws, Watts said the majority support “makes sense because study after study shows that gun safety laws save lives.”

The poll results come amid a sharp rise in gun violence in the United States and in large cities in California as the COVID-19 pandemic has caused economic and social turmoil.

Shootings in Los Angeles have increased by 43.9% so far this year compared with 2020, and homicides in the city have surged 28.9%.

Statewide, there were 2,202 homicides reported in 2020 — the vast majority involving firearms — an increase of 31% over the year before, according to a report this month from the state Department of Justice.

At the same time, the sale of handguns in California increased by nearly 66% in 2020 compared with the year before, the state attorney general reported this month.

Paredes said the decline in confidence in gun laws was predictable as hundreds of thousands of more Californians are buying guns for their own protection in response to the increase in crime and proposals to cut police funding.

“They are realizing that they are their own first line of defense,” he said.

He also said California voters have seen that mass shootings continue despite the state’s gun laws.

“The more the general public actually finds out about some of the shooting events that happen in California, it is starting to realize none of those laws would have affected any of the mass shootings that we’ve had,” he said.

In response to the national surge of gun violence, U.S. Atty. Gen. Merrick Garland announced a new federal strike team last week that will target the illegal flow of firearms into cities experiencing a surge in shootings, including Los Angeles, New York, Chicago and Washington, D.C., as well as the San Francisco Bay Area.

In April, President Biden also announced a series of executive actions to reduce gun violence including a proposal to require background checks for purchases of ghost guns, which are assembled from kits and can be sold without identification stamps.

The White House cited a report by the National Commission on COVID-19 and Criminal Justice that found homicide rates in 34 major cities across the country were 30% higher last year than the year before.

Despite having some of the toughest gun control laws in the nation, California has had a string of mass shootings in recent years, including one in May in which a gunman killed nine co-workers at a light rail yard in San Jose. In another shooting in March, a gunman killed four people and injured a fifth person at an office building in Orange.

The online survey, which was completed last week, found that 24% of those who responded feel the stronger laws restricting the sale and possession of guns would be “very effective” at reducing crime and 32% see them as “somewhat effective.”

The poll used a random sample of 5,785 registered voters throughout California.

DiCamillo said views on the effectiveness of laws vary considerably depending on the voters’ party registration, gender, area of residence and whether they live in a household with guns.

Some 79% of Democrats say gun control laws are effective in reducing crime, but only 18% of Republican voters share that view.

The poll found 68% of voters who live in households without guns believe firearms restrictions deter crime, twice the percentage of those in firearm-owning homes. Slightly less than a majority of men see gun laws as effective, but 63% of women have confidence in the restrictions.

Although gun control is seen as effective by large majorities of voters in coastal areas, including 66% of those in Los Angeles, most voters living in inland areas believe the laws are ineffective.