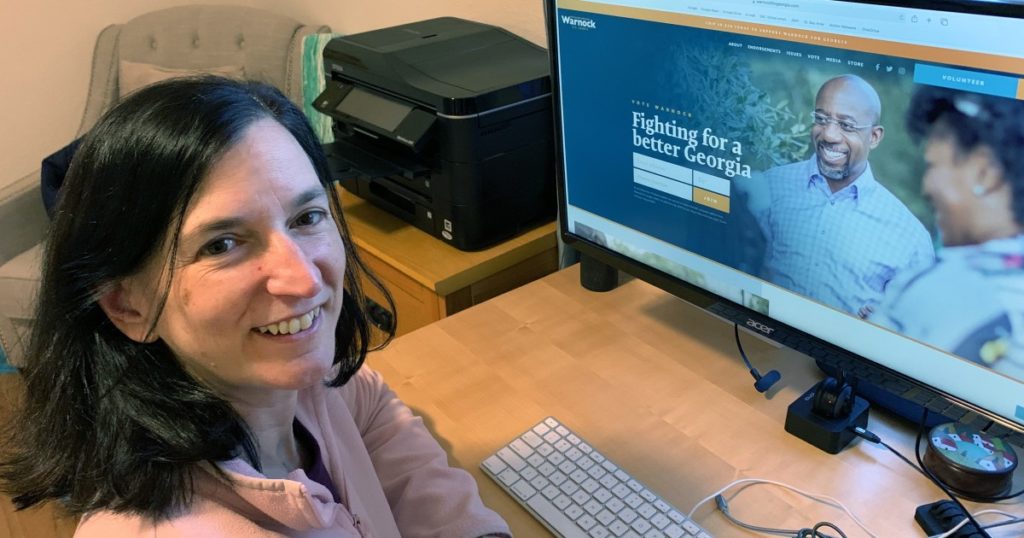 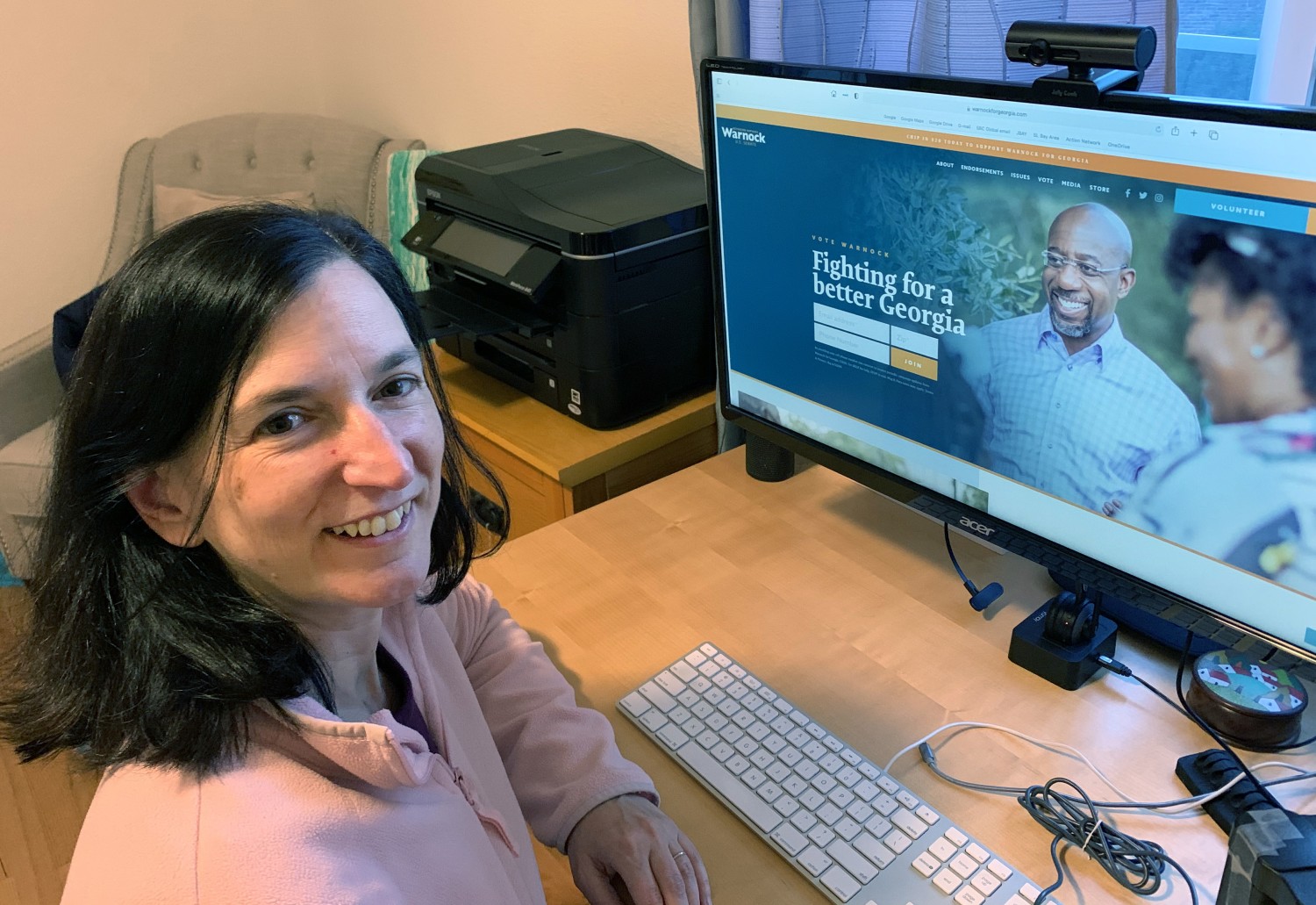 From her home in Daly City, Calif., Judith Bolker is working to flip Georgia blue.

The 69-year-old calls voters, urging them to vote for Jon Ossoff and the Rev. Raphael Warnock, the two Democrats seeking to topple Republican senators in the Peach State’s Jan. 5 runoff election. Bolker writes postcards and sends texts to Georgia voters of color for Reclaim Our Vote, a nonpartisan project focused on voter suppression. She also finds time to lead phone banks for the progressive organizing group Swing Left.

Bolker’s volunteering has the intensity of a full-time job. It can last from 8 a.m. to 11 p.m., she said, meals and exercise breaks notwithstanding. And she’s doing it all from a spare bedroom over 2,000 miles away from Atlanta.

“Some people have called [it] ‘canvassing from your couch,’” Bolker said.

With control of the Senate hinging on the outcome of the runoffs that pit Ossoff and Warnock against Republican Sens. David Perdue and Kelly Loeffler, the Georgia races have garnered national attention, attracting a flood of out-of-state volunteers.

Among those volunteers are Californians like Bolker who — in a different, pandemic-free year — might have travelled to Georgia to help the Democrats or Republicans directly. But while COVID-19 limits door-knocking and other in-person outreach, the volunteers say they haven’t felt too hampered by being forced to work from their couches.

West Coast Democrats and liberals appear to be leading the charge in both virtual campaigning — sending postcards, making calls, hosting Zoom meetings — and in grassroots donations. But Republicans are also hard at work, some of them from home and others on the ground, pushing a message with a homegrown twist: Avoid the California pitfalls that we know all too well.

“The skyrocketing cost of living, the homelessness crisis, the opioid crisis … Do not let what happened in California happen to Georgia,” said Krista Pittman, the Republican National Committee’s California state director during the general election, summarizing the California GOP’s pitch to Georgia voters.

It’s a tricky line to walk. Republicans “want to draw the message that … we don’t want to bring California values to Georgia,” GOP strategist Chip Lake said — but it’s hard for campaigns on either side to turn down free labor.

“I know that there are boots on the ground here from other states helping our candidates, meaning Republican candidates; but I also think there’s just as many, if not more, from the other side,” Lake said. “It’s a delicate balance, but it’s one you’ve got to play.”

Debbie Raucher, who has been working the phones from Oakland, recalled talking with an elderly man during a call with Swing Left’s East Bay branch. The man had gotten his absentee ballot, but didn’t know where to deliver it. From the other side of the country, Raucher helped him out.

“I gave him the address, and his wife was there as well; I could hear her in the background,” said Raucher, 51. “He was like, ‘Oh, OK,’ whatever it was, ‘123 Fourth Street at the library.’ And [his wife] was like, ‘Oh, yeah, I know where that is. I’ve seen that, it’s in the lobby.’ … He seemed like he needed some support in figuring out exactly how to get from Point A to Point B.”

Bolker, the Daly City political activist, hears about these small but meaningful interactions all the time during debriefs she runs after each shift at the virtual phone bank.

One caller reached a pastor, and the two connected over Warnock’s idea that “a vote is a prayer for the future.” Another wound up talking to a mother who hadn’t realized her 17-year-old child would be turning 18 in time to vote. With a day to go before the registration deadline, the volunteer successfully walked the family through registering the teen.

The pandemic isn’t keeping all volunteers away from Georgia. Two weeks after the general election, the Republican National Committee told Pittman, a 24-year-old Riverside native, to hop on a plane and head to Georgia.

Before the holidays, Pittman and five California Republican Party employees were stationed in a “very rural,” largely uncanvassed part of the state, knocking on doors in support of Loeffler and Perdue — albeit with masks on and from six feet away, Pittman said.

Last Saturday, while Pittman was knocking on doors in a neighborhood decked out in Christmas lights and wreaths, a woman noticed that she didn’t have a Southern accent and asked where she was from. Standing on the stoop, Pittman explained that she’d come in from California; the woman remarked that some of her friends had been getting letters about the election from California Democrats, and Pittman was pleased to let her know that California Republicans were doing the same thing.

“They’re just so shocked that other outside folks, such as myself from California, and then the California Dems, are participating in the election,” Pittman said. “It’s an all-hands-on-deck effort, that even people on the other side of the country … are sending postcards to voters.”

Even if Californians are sometimes cast as meddlesome outsiders, Bolker, Raucher and Pittman say Georgians have been exceedingly friendly, even after weeks of being hounded by campaign workers.

“The majority are appreciative,” Raucher said. “It’s such a great feeling when I’ve called somebody and given them information that they did not have that’s going to allow them to vote.”

Bridging the California-Georgia divide can be complicated. Sometimes, Raucher said, it feels like there’s very little differentiating her from the Georgians on the other end of the line; at other times, they feel a world away.

“When you talk to a real person, you’re reminded that they’re a real person,” she explained. “Despite how divided we are, we probably have more in common than we have differences.” But people at her phone banks have also had conversations with Republicans who “believe with all their heart of hearts” that the November election was fraudulent or antifa is “coming to get” them.

“There’s just a lot of people who have received their information from sources that are not providing accurate information, and so it’s a big challenge,” she said. “How do you come back from that?”